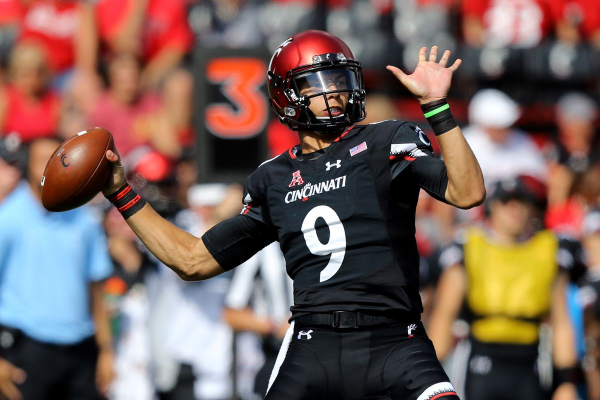 Friday night features a battle of American Athletic Conference teams as the No. 18 UCF Knights (4-1) travel to Nippert Stadium to take on the Cincinnati Bearcats (3-1). With both teams residing in the AAC East division, a win here could be huge moving forward. Kickoff for this matchup is scheduled for 8 pm ET.

The Knights have gotten off to a good start, with their only blip being a one-point loss (35-34) to Pittsburgh a couple of weeks ago. Last week, they handled Connecticut to the tune of a 56-21 win. They look to continue to roll against Cincinnati on Friday night.

Cincinnati comes in having won three of four games this season. The Bearcats’ lone loss was at the beginning of September, when they were trounced by the No. 4-ranked Ohio State Buckeyes 42-0. In their last two matchups, they beat Miami of Ohio 35-13 and Marshall 52-14. A win over top-25 ranked UCF would be a huge win for the Bearcats at this point in the season.

UCF comes into this one as a 3.5-point favorite despite playing on the road. The over/under for total points scored is set at 61.

On the defensive side, it is Cincinnati that holds the edge. They currently are ranked 29th in the nation in opponents’ points per game (20.8). UCF comes in 42nd, allowing 24.2 points per game.

Knights Hope To Ride Offense To A Victory

The Knights thought they took a crushing blow when they lost McKenzie Milton at the end of last season. Despite the loss, the offense has been good this season. Freshman quarterback Dillon Gabriel has been solid, completing 74 for 120 for 1,338 yards, 14 touchdowns and two interceptions. In five games, the quarterback has taken eight sacks.

On the ground, it is a two-headed monster in Greg McCrae and Adrian Killins Jr. Both of the running backs have four touchdowns, and both have rushed for over 300 yards (323 for McCrae, 310 for Killins).

Cincinnati Looking For Upset At Home

After struggling to score in the first couple of games this season, Cincinnati’s offense has played pretty well of late. Their offense is led by quarterback Desmond Ridder. On the season, he has thrown for 815 yards, eight touchdowns and a trio of interceptions. His leading receiver to date is Alec Pierce. Thus far, Pierce has caught 14 balls for 277 yards and a touchdown. Josiah Deguara also has played well, hauling in 12 catches for 183 yards and three touchdowns.

It is undeniable that Cincinnati has been playing better. Ever since getting shut out by Ohio State, their offense seems to have woken up a bit. Still, I don’t know if they have the firepower to keep up with UCF. It also doesn’t help that their offensive line has been susceptible to giving up sacks, an area that UCF’s defense is pretty decent at.

While I think that this could be close through the first half, I do anticipate that UCF eventually will pull away in this one and will not only win straight up but also cover the 3.5-point spread. For my money, I am taking UCF.