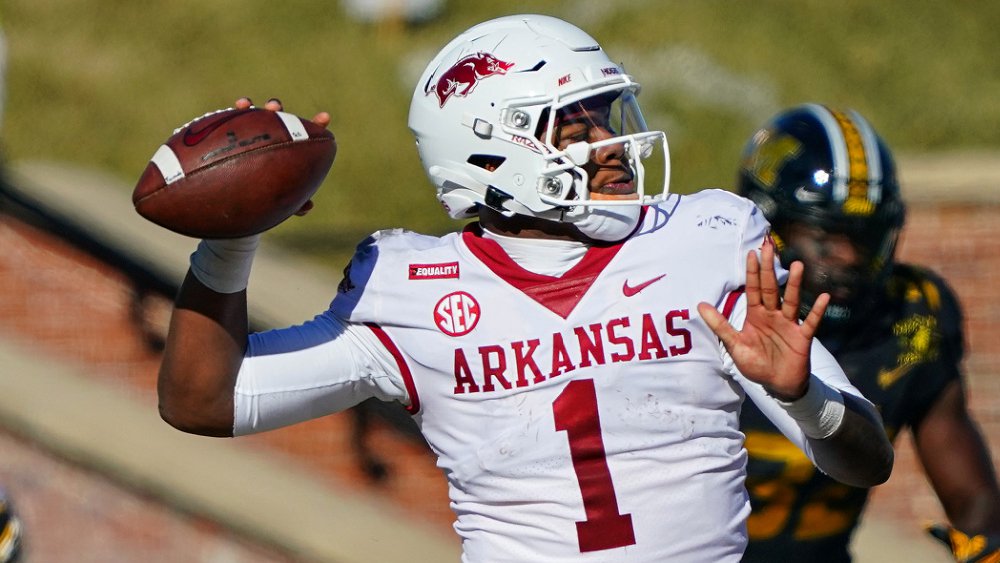 Coming into the season, Texas A&M was expected to make a challenge for a College Football Playoff berth. Arkansas did not have that level of expectations, but the two former Southwest Conference rivals clash today with a lot on the line for both teams.

Texas A&M got a mighty scare and lost their starting quarterback against Colorado two weeks ago, but the Aggies are 3-0 and solidly in the top 10 of the major polls. Their 3-0 start is no surprise, but the same can’t be said for Arkansas. Their romp over Texas two weeks ago served some serious notice about what Sam Pittman’s Razorbacks can achieve this season.

Will A&M open SEC play by knocking Arkansas down a peg or two, or will the Hogs pick up another signature September win?

Haynes King opened the season as Texas A&M’s starting quarterback, but he was injured against Colorado. A&M’s College Football Playoff hopes may hinge on how Zach Calzada does over the next few weeks. He has a good arm but is not nearly as mobile as King.

After some rough moments when pressed into action against Colorado, Calzada got some valuable reps last weekend against New Mexico. In the Calzada completed 19 of 33 passes for 275 yards and three touchdowns. He has a top prospect at tight end in Jalen Wydermyer and a good group of weapons, but A&M needs running backs Isaiah Spiller and Devon Achane to relieve some of the pressure on Calzada.

Offensive production will matter only so much if the Aggies can continue playing elite defense. They are first in the nation against the run and first in points allowed. Their competition has been light so those numbers are likely to come up, but it is definitely not a surprise that they are strong on defense. This is supposed to harken back to the “Wrecking Crew” days. As long as the defense is strong they might not have to force things offensively.

Hogs are Looking for More Proof of their Rising Status

The Razorbacks have three wins and three covers. They were impressive against Texas and showed their professionalism by not suffering a letdown against Georgia Southern. KJ Jefferson has looked good as the starter at quarterback. He gives them enough of a passing threat to balance a ground game that has churned out 282 yards per game.

Arkansas does not have the same caliber of defense as Texas A&M. They are more in the “good enough” category and they are solid in the trenches. I don’t expect them to get pushed around in this matchup. The key will be can they make the big play when they need it. They have only three takeaways over their first three games. They need to create more big plays to beat teams that are more talented.

When Texas A&M is going well, they are a legitimate threat to the top teams in college football. Arkansas has really raised their floor quickly under Sam Pittman though. They are physical and tough and they don’t make mistakes.

If this game were in Fayetteville, I might pick Arkansas on the ML, but this game is at JerryWorld, where the crowd will be more split. I am looking for Arkansas to continue to be steady. They will have a chance to win this one late, and I like them to cover even if they don’t pull out the win.

The 2022 French Open is underway at Stade Roland Garros in Paris, France, and we are already almost through the first week of play. Tomorrow, the remaining third-round matches will take place, after which the men’s and women’s singles draws will be down to their final 16 contenders. In both men’s and women’s singles, there END_OF_DOCUMENT_TOKEN_TO_BE_REPLACED