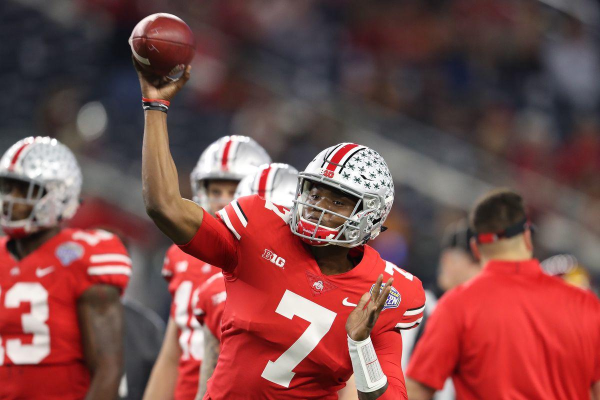 On Saturday, the Big Ten will feature two of its best as the number 10 Ohio State Buckeyes (8-1) travel to Spartan Stadium to take on the number 18 ranked Michigan State Spartans (6-3).  For the Buckeyes, they have lost a little bit of their luster over recent weeks. After a shocking 49-20 loss to Purdue on October 20th, they came back after a bye to just squeak by Nebraska 36-31 last week.  Still, when right, the Buckeyes have one of the most dynamic offenses led by a Heisman trophy candidate in Dwayne Haskins.  For Michigan State, it has been a very inconsistent season. At 6-3, they have played well at times, particularly on the defensive side, but have also had a lot of missed opportunities, such as their week 2 loss to Arizona State 16-13.  The two Big Ten powerhouses will class on Saturday with a 12:00 pm ET kickoff.

The point spread comes in with the Ohio State Buckeyes being 3.5-point favorites on the road.  The over/under on total points scored is a paltry 49 points.

Ohio State Looking To Get Back On Track

With only one loss on the season, Ohio State has not given up hope to play in the NCAA football playoffs.  Especially with number 18 Michigan State this week and number 4 Michigan in a couple weeks, there is still a possibility to make a surge in the college rankings.  To do this, though, quarterback Dwayne Haskins and the Buckeyes are going to have to be able to find a way to attack Michigan State’s powerful defense.

If the Spartans were able to beat the Buckeyes at home, not only would it likely improve their national ranking, but it would also help their positioning in the Big Ten East rankings.  At 4-2 in the conference, Michigan State is behind Michigan (6-0 in conference) and Ohio State (5-1 in conference).

To try to upset the Buckeyes, the Spartans will look to quarterback Brian Lewerke to lead the offense.  On the season, he is 151 for 270 for 1,740 yards, 8 touchdowns and 8 interceptions. Lewerke’s leading receivers are Felton Davis III (31 catches, 474 yards, 4 touchdowns) and Cody White (22 catches, 320 yards, 2 touchdowns).  On the ground, the Spartans have a balanced attack as Connor Heyward leads all backs with 358 yards and 5 touchdowns on 70 carries, but Brian Lewerke (68 rushes for 117 yards and 2 touchdowns), La’darius Jefferson (65 rushes, 223 yards, 2 touchdowns) and LJ Scott (55 rushes, 180 yards) have also gotten in on the action.

Ohio State Wins On The Road

Basically, this game comes down to Ohio State’s offense versus Michigan State’s defense. While the Spartans have a very stingy defense and are excellent against the run, they have been susceptible against the pass this season.  Enter Dwayne Haskins. The sophomore Buckeye has been fantastic in the passing game and I think that he has some success against Michigan State. I am not sure I see this being a super high scoring game, but I do see Ohio State winning and covering the 3.5-point spread.