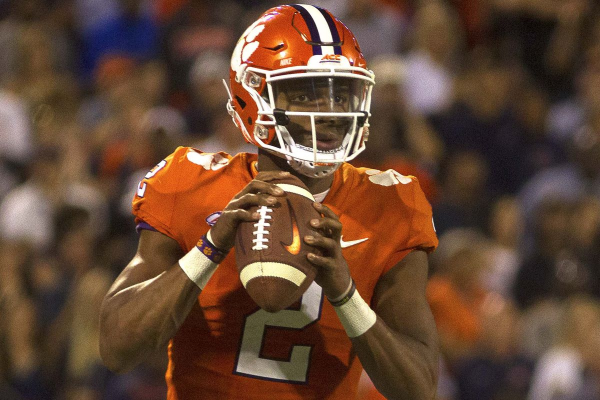 What a long strange trip it’s been in the college football world, and that’s just in the past week. Between the injuries and the sudden transfers, things have gotten crazy over the past few days. Let’s take a look at all the top stories you may have missed.

Out and Out of Here

A week ago, KellyBryant was Clemson’s starting quarterback, and now he’s no longer part of the program. On Monday, Dabo Swinney announced that true freshman Trevor Lawrence would be the starting quarterback after sharing the duties with Bryant through the first four games. Two days later, Bryant announced that he would transfer. The new redshirt rule allows Bryant to redshirt this season because he’s only played in four games thus far, enabling him to leave the team, graduate from Clemson, and be immediately eligible to play somewhere else next season.

Bryant called the quarterback switch “a slap in the face,” while Swinney said he was “saddened and disappointed” at Bryant’s choice. Swinney says he gave Bryant the option to stay on the team but not play in order to preserve the redshirt option without leaving the team. However, Bryant chose to leave the program and set out on his own.

Not the Only One

Bryant is not the only player taking advantage of the new redshirt rule as it relates to transferring when you aren’t getting the playing time you think you deserve early in the season. Arkansas wide receiver Jonathan Nance, Oregon running back Taj Griffin, and Oklahoma State wide receiver JalenMcCleskey have also announced their intentions to transfer over the past week. All have done so before surpassing that threshold when a redshirt season becomes possible. Of course, all the players, including Bryant, will stay in school the rest of the semester but not be a part of their team until they’re able to transfer either in January or over the summer.

Virginia Tech’s loss to Old Dominion last week was one of the most embarrassing defeats of a power conference team in quite some time. But it could get worse for the Hokies, as starting quarterback Josh Jackson has been ruled out for the foreseeable future after breaking his leg in the 4th quarter of that loss. The injury required surgery earlier this week and will force Kansas transfer Ryan Willis into the starting job. Virginia Tech head coach Justin Fuente has also dismissed Trevon Hill, the team’s leader in sacks, for not meeting the program’s standards away from the field.

Gonna Be A While

With their showdown with Penn State a couple of days away, Ohio State got the prognosis on defensive end Nick Bosa, and it’s not good. Bosa suffered a core muscle injury that required surgery during the team’s win against TCU. Urban Meyer has indicated that Bosa will be out until at least November, which is a huge loss for the Buckeyes. However, Bosa’s parents have intimated that there’s a chance Bosa doesn’t return to the Buckeyes at all. Bosa is considered a top-5 NFL draft pick, and after he’s re-evaluated by a surgeon in November, his family will discuss whether it’s best for him to play the rest of the season or not.

Just four games into the season, Wake Forest has fired defensive coordinator Jay Sawvel. The move comes after the Demon Deacons allowed a total of 97 points to Boston College and Notre Dame the past two weeks, both losses to drop Wake to 2-2 on the season. In Sawvel’s defense, the Wake Forest defense was burned on play-action against Boston College while trying to focus on AJ Dillon, one of the best backs in the country. Against NotreDame, the Irish made an unannounced quarterback change. Either way, head coach Dave Clawson felt a change was warranted. Moving forward, the rest of the defensive staff will split the coordinator duties.

That’s All She Wrote

Sadly, Northwestern running back JeremyLarkin has been forced to call it a career. Larkin has been diagnosed with cervical stenosis, which is the narrowing of the upper part of his spine, forcing him to retire out of concern for his long-term health. His condition is the same that has plagued New York Mets third baseman David Wright in recent years and is forcing him to hang up his cleats. Larkin has been Northwestern’s leading rusher this season, and without him, their running game could be in serious trouble.

Tonight’s NBA betting schedule is lacking in overly compelling matchups, but tonight’s action will also be taking place with a few notable names missing. Booker, Morant, and Lillard Sidelined Tonight and Beyond Booker Out Versus Pistons Due to Hamstring Injury The Phoenix Suns lost Devin Booker (hamstring) on Tuesday against Golden State but closed out END_OF_DOCUMENT_TOKEN_TO_BE_REPLACED