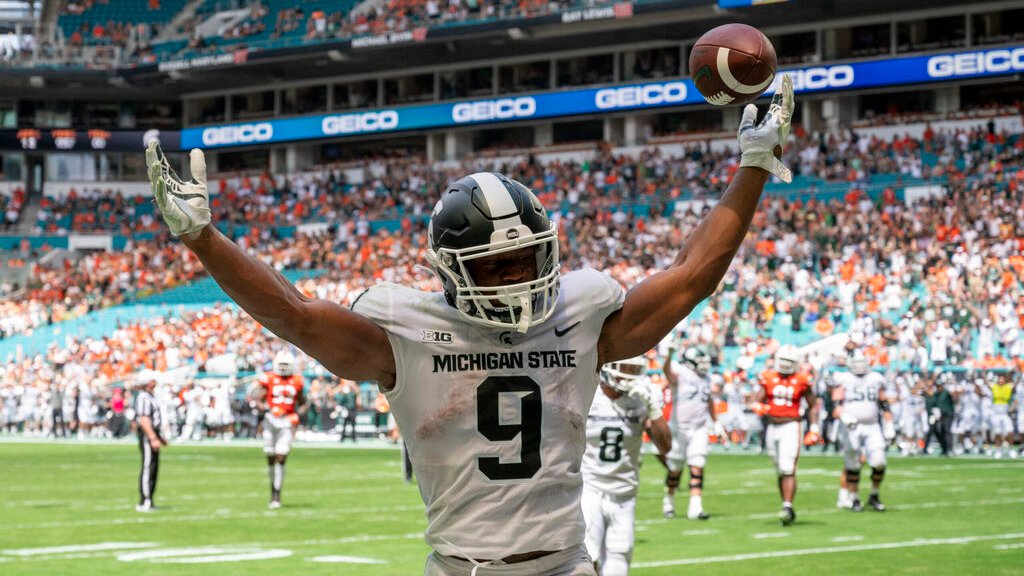 There are only 13 undefeated teams left in major college football, and Michigan State might be the most surprising of that group.

Indiana is learning the hard way that being near the top of the Big Ten is a pretty tough spot to maintain if you are not Ohio State. It has been a disappointing season for the Hoosiers, but Michigan State would be wise to not underestimate them.

The Spartans better bring their A-game if they want to stay undefeated on the road. They are not sneaking up on anyone anymore.

Who could have seen Michigan State’s success coming? Last year Mel Tucker was in his first year on the job after one year at Colorado and things looked pretty messy. This season, with a new starting QB at the helm and a new running back to hand off to, the Spartans are not only functional, but thriving. More than that, RB Kenneth Walker III is leading the nation in rushing, and QB Payton Thorne gives them one of the most balanced offenses in the nation. What is Michigan State’s ceiling? I don’t know yet, but they have been impressive so far.

If there is anyone who would know what good defense is, it is Tucker. Playing with leads has made their defense even better even though they might be missing that one standout player. Indiana is not a proficient as they were a year ago on offense, and Michigan State matches up well.

Hoosiers are Down but Could Cause Problems

Indiana is not having a good season at 2-3. However, you do have to look at who they lost to though. Those three teams, Iowa, Cincinnati, and Penn State have just one loss between them, which is Penn State’s loss to Iowa last week.

This Hoosiers team caught lightning in a bottle last season, and that is tough to do two years in a row with the recruits they get. They are no longer a laughing stock, but you have to pump the brakes once in a while when a program busts through its ceiling. I love coach Tom Allen, but it looks like teams are onto their offense. They are only averaging 24 points per game with a returning QB and top receiver. That just isn’t cutting it.

The Indiana defense has not been stout enough to cover for the lack of offensive production. That would have been a surprise if they were. Indiana’s goal is to get a lead so they can force opponents to do the things they don’t want to do. That is tough when you are getting pushed around and the offense is sputtering. They might be able to have a chance in this one, but when they have played other top teams they have really struggled.

This one is all about the trajectory of the programs right now. Michigan State has things rolling, and with Walker leading the way it is going to be hard for them to be stopped by a team like Indiana.

Maybe Allen can come up with a game plan to keep the Hoosiers in the game or get the pace where they want it. But beyond that, it is hard to back Indiana even at home. The Spartans are a perfect teaser candidate this week as well.

The 2022 French Open is underway at Stade Roland Garros in Paris, France, and we are already almost through the first week of play. Tomorrow, the remaining third-round matches will take place, after which the men’s and women’s singles draws will be down to their final 16 contenders. In both men’s and women’s singles, there END_OF_DOCUMENT_TOKEN_TO_BE_REPLACED