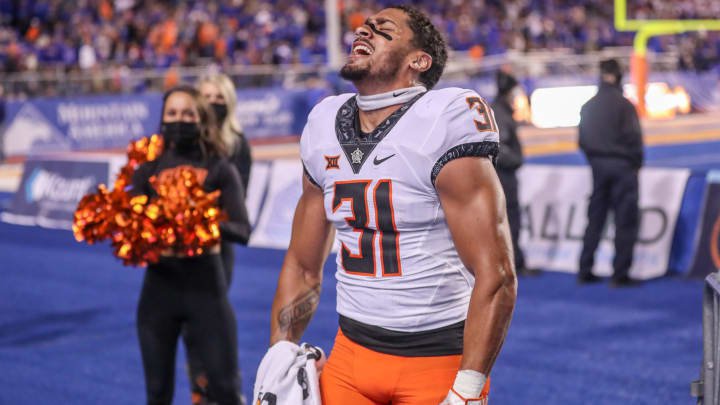 In another matchup of 3-0 teams, Kansas State travels to Stillwater to take on Oklahoma State. The college football season is still young, but both of these teams should enter Big 12 play full of confidence after picking up some quality non-conference wins.

Kansas State opened their season with a win over Stanford, which could register as a very impressive win if the Cardinal can make some noise in the Pac-12 this season.

Oklahoma State’s three games have all been decided by seven points or less, but the Cowboys have come out on top in all three contests, including last week’s one-point win over Boise State.

The fact that the Wildcats have yet to lose is pretty impressive given QB Skylar Thompson has been hurt. He did not play at all last week and is expected to be out for this game too.

But the Wildcats do have running back Deuce Vaughn, who is one of the most underrated players in college football. He has started the season with three straight games of at least 120 yards rushing. Quarterback Will Howard is going to be the key to this one. As long as he protects the ball Kansas State should be in this game. They have enough to stay with Oklahoma State.

Kansas State’s defense has been impressive so far. They held Stanford to just seven points in the opening game and really limited a good Nevada team last week. The Wolfpack rushed for 25 yards on 23 carries and struggled with being so one-dimensional on offense. Carlos Strong is the best QB they have faced this season and they were able to sack him three times and make it hard for him to be comfortable. They have to keep that up.

Cowboys Continue to Come Through in Close Contests

Last year was supposed to be a big year in Stillwater, but it never came together. They could not get RB Chuba Hubbard going the way he was the year before and QB Spencer Sanders struggled with injuries.

This year is showing promise, even though the Cowboys have yet to dominate an opponent. They enter Big 12 play with some good momentum off of a solid win at Boise State, a weird game where neither team scored in the second half. Sanders had the winning score last week but has struggled overall this season. He is a true threat as a runner but has just never developed as a passer. Similar to Howard above, this is a matchup they can win without him being great. He just has to have a clean game.

The Pokes’ defense has been good but not elite this year. Holding Boise State scoreless for a half is pretty impressive, especially given how close the game was. The key for this one is containing Vaughn. K-State has a good offensive line and he is tough to tackle. If they can make him earn all of his yards and avoid the home run play they should be able to keep themselves in the game and win it.

I find it hard to fade Oklahoma State at home even though they love to disappoint backers. The Cowboys will turn the game with one crucial big play. They just have more athletes who can step up and do it. It might even be Sanders, though that will probably be with his legs, not his arm.

It has been a miserable month for the Seattle Mariners, and things are unlikely to get any better tonight as they welcome AL Cy Young Award favorite Justin Verlander and the Houston Astros to T-Mobile Park. After just missing out on the MLB playoffs last season, the Mariners entered this season with hopes of finally END_OF_DOCUMENT_TOKEN_TO_BE_REPLACED