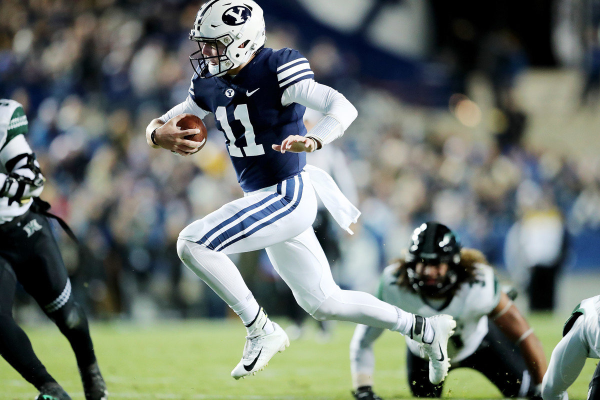 Bowl season is upon us and Friday night will feature a matchup of the Western Michigan Broncos (7-5) against the BYU Cougars (6-6) at Albertsons Stadium in the Famous Idaho Potato Bowl.

For the Broncos, it has been a tale of two halves of the season. They started the season going 6-2, with their only 2 losses being against Syracuse and Michigan, two top-25 teams. After that, though, they rattled off 6 wins in a row before they program suffered a major blow. In their week 9 matchup against Toledo, quarterback Jon Wassink was injured, tearing ligaments in his ankle and requiring season-ending surgery. Freshmen Kaleb Eleby took over, but they have not looked the same since. They lost 3 in a row before salvaging the last game of the season against Northern Illinois.

For BYU, they finished the season at 6-6 and have looked pretty inconsistent throughout. In their first 6 games, they went 3-3 under then-quarterback Tanner Mangum. While a switch to quarterback Zach Wilson also led to a 3-3 record down the stretch, the offense at least looked more dynamic. It is worth noting that of their 6 losses, 4 of them were by 8 points or less, and 3 of them were by top-25 ranked teams.

The point spread comes in with BYU being heavy 12.5-point favorites. The over/under on total points scored is set at 51.5 points. Kickoff for this one is scheduled for 4:00 pm ET on Friday.

Western Michigan Hoping To Crack The Code Of BYU’s Defense

The Western Michigan Broncos are looking for their first bowl win since the 2015 Bahamas Bowl as they lost in 2016 in the Cotton Bowl and did not play in one last year. For the Broncos, they will be relying heavily on freshmen Kaleb Eleby to lead them from under center. On the season, the Broncos offense has averaged 33.17 points and 447.2 total yards. Eleby is 72 for 111 with 917 yards, 4 touchdowns versus 2 interceptions. He has a passer rating of 142.55.

For the defense, they have allowed an average of 33.33 points per game and an average of 378 yards per game to opponents. The stat leaders for the Broncos include Drake Spears (82 tackles), Ali Fayad and Ralph Holley (7 sacks apiece), and both Juwan Dowels and Anton Curtis (2 interceptions apiece).

For BYU, their calling card is their defense. They have been scoring just 25.4 points per game, but have only been giving up 21.7 points (ranked 28thin the nation). In terms of total yards, they have been giving up just 325 total yards to opposing offenses throughout the season (just 129.4 per game on the ground, 25th-fewest in the nation). Their stat leaders include Sione Takitaki (99 tackles), Corbin Kaufusi (8.5 sacks) and Isaiah Kaufusi (2 interceptions).

Offensively, BYU is led now by Zach Wilson under center. On the season, he has thrown for 1,261 yards, 8 touchdowns versus 3 interceptions. He has also rushed for 198 yards and 2 touchdowns on the ground. His leading receivers include Aleva Hifo (26 catches, 273 yards, 1 touchdown), Matt Bushman (25 catches, 459 yards, 2 touchdowns) and Talon Shumway (20 catches, 319 yards, 3 touchdowns).

BYU To Win And Cover

Betting on this one comes down to BYU’s defense versus freshman Kaleb Eleby. Ultimately, I think that BYU will be able to score against Western Michigan, but betting the spread comes down to how dominant BYU will be on D. Knowing that Western Michigan only scored more than 30 points once under Eleby, against teams that don’t have as stingy of a defense as BYU, I don’t love their chances. I am definitely taking BYU to win this one and will roll the dice on them covering the lofty 12.5-point spread.