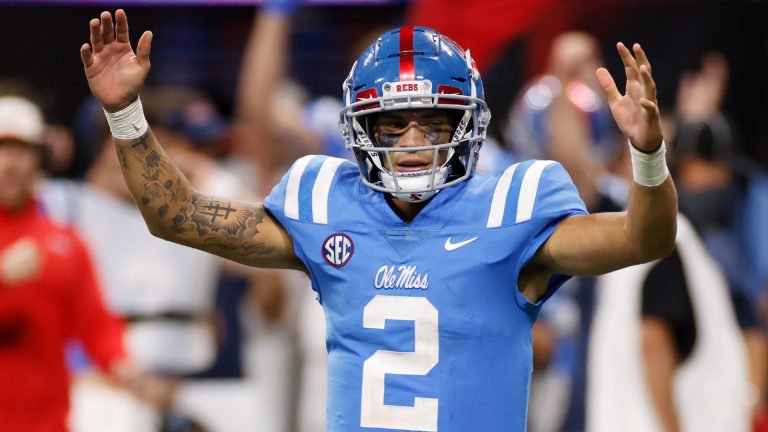 After last season’s staggered starts and many cancellations and postponements, the college football season is back to something that resembles normal. And with the return of normalcy comes the chaos that often occurs in the first few weeks of the college football season. The first two full weeks have not been light on chaos, with upsets, close shaves, big wins for big names, and even a (thoroughly unsurprising) firing to open up one of the top head-coaching jobs in college sports.

How do things look from a betting standpoint after the first two full weeks of action? Let’s take a look at how the latest college football betting odds look heading into this week’s slate.

All college football odds listed here are via FanDuel Sportsbook, as of Tuesday, September 14, 2021.

Can Oregon or a Big Ten Team Other Than Ohio State Make the CFP?

It’s still early, but it will be a surprise if all four College Football Playoff participants don’t come from that top five. Yes, Clemson and Ohio State have both lost already, but both of those losses were out of conference against highly-ranked opposition. Provided the Tigers and Buckeyes run the table from here, it’s difficult to see them miss out on the CFP.

What, no love for Oregon after their upset win in Columbus? Well, the Pac-12 has not had a team run the table since the Ducks did so in 2010, when they lost to Cam Newton and Auburn in the BCS title game. There are no obvious losses on Oregon’s schedule from here, and it is debatable who in the Pac-12 is actually good, but the conference rarely has unbeaten champions for a reason.

Oregon doesn’t have to play Arizona State in the regular season, and they also don’t get USC, who might be better now that Clay Helton’s tenure has mercifully been ended. The toughest game on their schedule looks to be an October 23 date at UCLA, whose legitimacy will become clearer over the next three weeks. The Bruins host a Fresno State team that pushed Oregon all the way in Eugene, hit the road to face the Stanford team that dismantled USC last Saturday, and host the talented Sun Devils.

Colorado did a great job of pushing Texas A&M after the Aggies lost starting quarterback Haynes King, but their near-upset doesn’t improve their standing as a conference title contender. However, if quarterback Brendon Lewis can become more of a threat through the air, the Buffaloes could make things interesting in their head-to-head matchups with the likely title contenders.

Colorado welcomes Minnesota to Boulder this weekend, and speaking of the Big Ten, don’t get hasty and buy in too big on Iowa, Michigan, or Penn State. Iowa is Iowa, Michigan is Michigan, and there is no way that Penn State, who hosts Auburn this weekend, makes it out alive with the schedule they have, which takes them to both Columbus and Iowa City, and the possibility of needing to beat either Iowa or Wisconsin twice in one season.

Also, to get into the CFP, Penn State would almost certainly need to have one regular-season loss at most. How many times have they managed that since winning the national championship in 1986? Three times: 1994 (undefeated), 2005 (one loss), and 2008 (one loss).

So in other words, it’s still Ohio State or bust until someone in conference actually takes them out.

Slow Down or Full Speed Ahead on the Corral Heisman Hype Train?

The early part of the college football season is good for elevating unlikely long-term hopefuls into the Heisman Trophy race. Last season, Mississippi State’s K.J. Costello was all the rage after a record-setting debut against LSU. But the season quickly unraveled for Costello, who eventually lost his starting job.

Alabama’s super sophomore quarterback, Bryce Young, is the current favorite. In blowout wins over Miami and Mercer, Young completed 70.8 percent of his passes for 571 yards and seven touchdowns with no interceptions.

Next in line is Ole Miss quarterback Matt Corral, a shade behind Young but a decent distance ahead of Oklahoma’s Spencer Rattler. Corral has thrown for 662 yards and six touchdowns in his first two games, and the Rebels are ranked in the top 20 after routing Louisville and Austin Peay.

Will Corral remain in the running? Ole Miss has to play Alabama and Auburn on the road, but they do get LSU and Texas A&M at home and avoid Florida and Georgia. Corral should continue to put up huge numbers, but Ole Miss will need to their best season of the post-Hugh Freeze era for Corral to contend all season.

That said, if Alabama and Oklahoma keep it up, voters are unlikely to pass on Young or Rattler. And if Ohio State runs the table from here, C.J. Stroud will be in the mix as well. But it will be interesting to see if Corral can have the individual and team success needed to crash the party.