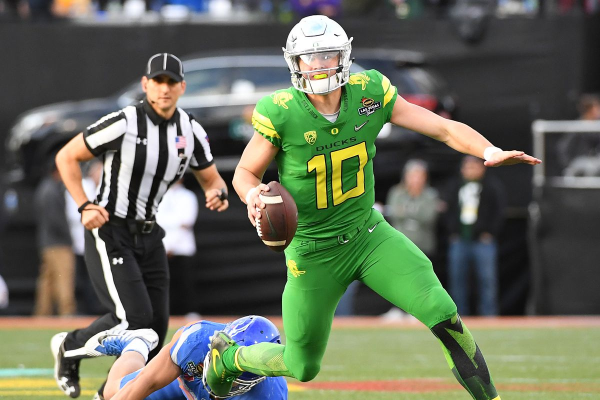 Two heavyweights will be taking the field in Eugene, Oregon on Saturday as the number 17 Washington Huskies (5-1) travel to Autzen Stadium to take on the number 17 OregonDucks (4-1). This game not only has huge implications for the national rankings, but it also will go a far way in determining the Pac-12 North winner. Right now at 3-0 in the conference, the Huskies sit atop the conference standings, but Stanford, Washington St. and Oregon are all hoping to take advantage of a Washington loss.

The spread for this one comes in with the Washington Huskies being slight 3.5-point favorites on the road. The over/under for total points scored sits at 57.5 points.

To this point in the season, Washington’s defense has been one of their calling cards for why they are ranked number 7 in the nation. To date, the Huskies are allowing just under 14 points per game this year. While an impressive number, they have not exactly played the hardest schedule to date. After losing 21-16 to Auburn in the opening week, they have won 5 straight but their schedule has featured North Dakota (45-3), Utah (21-7), Arizona State (27-20), Brigham Young (35-7) and UCLA (31-24). Since the opening game against Auburn, this will certainly be their toughest defensive challenge to date.

Offensively, Washington is led by Jake Browning at quarterback. Through six games, Browning has 1,508 yards (251.3 per game) and 9 touchdowns. His leading receiver is Aaron Fuller with 574 yards and 2 touchdowns. Ty Jones has also added 267 yards and 4 touchdowns on 14 receptions.

On the ground may be their best threat, though, as MylesGaskin is averaging 92.3 yards per game (554 yards on the season). He has also added 5 touchdowns on the ground. Salvon Ahmed is their second leading rusher with 258 yards and 2 touchdowns. Going against a team in Oregon that just allowed 241 yards to the California Golden Bears, Washington may find the ground game most fruitful.

Oregon Has Big Opportunity At Home

With their sole loss being to Stanford in a 38-31 overtime thriller, the Oregon Ducks are hoping that Saturday becomes a bit of a statement game for them. The Ducks are led by quarterback Justin Herbert, who through five games is averaging 282.2 yards in the air (1,411 overall). He has also added 15 touchdowns passing as well as 173 yards and a score rushing. Against a team that is allowing 305 yards per game in the air, Herbert may be in store for a big game Saturday.

While their run defense may be shaky, Oregon does have a secondary that looks for turnovers. They have 8 interceptions on the season, including 4 last week against the Golden Bears. If Jake Browning has a bad day, Oregon may be able to take full advantage of the turnover battle.

Ducks Get It Done At Home

There is just something about the fact that since week one Washington has not been tested that makes me leery of them going into this game. While they have won 5 in a row, it hasn’t exactly been against the cream of the crop on the national level. With that in mind, I actually like Oregon to win this game outright on Saturday, but when getting 3.5 points, I really like the Ducks’ chances. Take the Ducks and the 3.5 points.