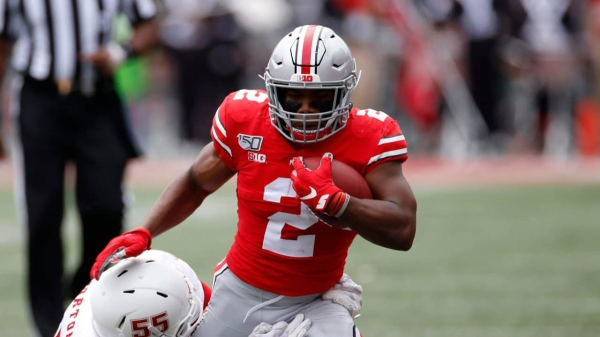 The No. 4 Ohio State Buckeyes have been absolutely dominant so far this season, but they still have some work left to do. Ohio State looks like the best chance for the Big Ten to break into the College Football Playoff this season, but there are still a few teams that would love to knock the Buckeyes off. Michigan State will be in Columbus this weekend, and they have given Ohio State plenty of trouble in the past. There is a large spread for this week six showdown, but Big Ten games are always hard to predict.

Ohio State comes into this game with a perfect 5-0 record, and they have yet to be challenged so far this season. The Buckeyes are outscoring their opponents by almost 44 points per game this season, but things should start to tighten up as Big Ten play intensifies. No. 25 Michigan State is 4-1 so far this season but is just one play away from being 5-0. The Spartans are still ranked in the Top 25 and are looking for a resume-boosting win, and this is a great shot. Ohio State is a 20-point favorite in this game.

Some people were worried that the Ohio State Buckeyes would take a step back without head coach Urban Meyer, but that hasn’t been the case. Ryan Day has taken over in Columbus, and his offense is still one of the best in the country. The Buckeyes are averaging over 52 points per game this season, and they run the ball unbelievably well. J.K. Dobbins leads the team with 654 rushing yards this season, but he has had plenty of help. Quarterback Justin Fields has been solid as well, and no one has been able to slow down the Ohio State offense this season.

The Buckeyes struggled a bit on defense a season ago, but they have been hard to score on so far this season. Ohio State is allowing just over eight points per game, and it has been downright dominant in most of its games. The Buckeyes have already recorded an astonishing 24 sacks so far this season, and they blitz early and often. Don’t be surprised to see Ohio State put up a low number on Saturday night.

Quarterback Brian Lewerke is having his best season in East Lansing, and the Spartans actually have a competent offense this season. Lewerke has thrown 10 touchdowns to just one interception this season, and he will need to be great in this game. The Spartans have averaged just over 140 rushing yards per game, but they will need to get close to 200 if they want to win this game.

There is no doubt that Michigan State will be the toughest team that the Buckeyes have faced this season, but it still might not matter in the final score. The Spartans are terrific on the defensive side of the ball, but their offense struggles to find the end zone at times. Playing at Ohio State will not help solve these problems, and the Buckeyes are really good. Ohio State has been scoring points like crazy this season, and that won’t stop in this game. Bet the Buckeyes -20.0 points over the Spartans on Saturday night.