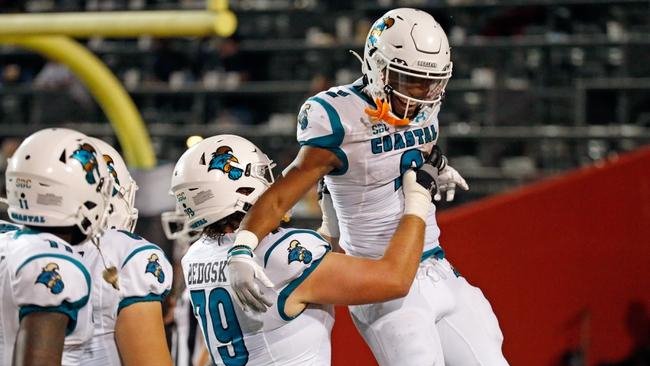 Coastal Carolina is one of a small group of still-undefeated teams in college football. This is probably the greatest threat to a second straight perfect regular season for the Chanticleers.

Appalachian State has to be getting frustrated that other teams are rising above them in the Sun Belt, especially upstart CCU. They might have a couple of losses but have played the tougher schedule.

The Chanticleers are ranked 16th nationally, and this might be their last opportunity to post an impressive win. The game is the first game on this week’s college football schedule, so they have a national audience to impress too.

The Chanticleers are more than just a perfect 6-0 on the season. They are 5-1 ATS thanks to the top-scoring offense in college football. They are beating opponents by an average of 33 points per game and have been favored by at least 14 points in every game this season. No, they do not have the talent to go toe to toe with likes of Georgia, but they have been crushing teams all season.

App State is looking to rebound off one of their worst performances in years. Last week they were at Louisiana and got embarrassed. At home this week they will be looking to show that they are still relevant in the Sun Belt. Being at home should help. I don’t think the program is slipping. It is more that other programs have risen above them.

This is probably as short a line as you are going to get on a CCU game this season. Winning on the road in any conference in college football, when the opponents are more familiar, is tough. But the Mountaineers are not what they have been in the past while Coastal is not getting enough respect because their schedule has been light. There is no BYU game coming either, though that would once again be a nice tilt. I do not want to miss the Chanticleers at this price. They should win each half by at least a touchdown.

The 2022 French Open is underway at Stade Roland Garros in Paris, France, and we are already almost through the first week of play. Tomorrow, the remaining third-round matches will take place, after which the men’s and women’s singles draws will be down to their final 16 contenders. In both men’s and women’s singles, there END_OF_DOCUMENT_TOKEN_TO_BE_REPLACED