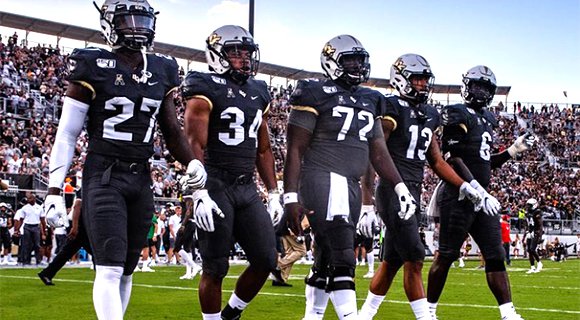 The American Athletic Conference has consistently been relevant over the last few seasons. Cincinnati was a playoff threat last season, and UCF won 35 games between 2017-19, including an unforgettable 13-0 season in 2017. And in 2019, the most recent full college football season, the AAC had five teams with double-digit wins in Cincinnati, Memphis, Navy, SMU, and UCF.

This year, the Bearcats are the prohibitive favorite to win the AAC title for the second year in a row. They were able to retain coach Luke Fickell and return a very experienced lineup. That said, it does not look like a slam dunk for the Bearcats. There are a few teams capable of beating them, led by UCF and Tulsa, who played them tight in 2020.

The key for Cincinnati might be remaining focused on AAC play. They have big games against Notre Dame and Indiana that will be key to their playoff hopes, but only if they can have a perfect season in the American.

Odds to win the 2021 AAC Championship

This year, Cincinnati’s season will be all about whether they can take that next step. Last season, the Bearcats made an undefeated run through the regular season and won the AAC title to earn a berth in the Peach Bowl, where they lost to Georgia in heartbreaking fashion.

UCF and Tulsa played them close in 2020, with Cincinnati winning both games by three points. They do have the advantage of playing both teams at home this season, but those could still be tricky games. Retaining their in-demand coach and returning a highly successful three-year starter at quarterback in Desmond Ridder put the Bearcats in a position that their AAC rivals can’t easily match, however.

Will their road trips to Indiana (Sept. 18) and Notre Dame (Oct. 2) help or hurt them entering conference play? Having a bye week between the two games doesn’t hurt, but and their conference slate is favorable as well.

Betting on Cincinnati to win the AAC title comes with a lot of chalk, sure, but it is a bet that you can make with confidence.

The Knights may have lost three AAC games last season, but all were by one score, so they didn’t exactly suffer a major drop-off. This season, they are breaking in a new coach, as former Auburn coach Gus Malzahn replaces Josh Heupel, who made the leap to the SEC with Tennessee. Is Malzahn an upgrade? I feel it is.

QB Dillon Gabriel and the entire offensive line return from an offense that averaged 42 points per game and was second in the nation in yards per game, so there is a lot to build from. Malzahn is not going to slow things down, and some new wrinkles could lead the Knights back to the top of the AAC.

The defense is where this group needs to be better. Defensive end Big Kat Bryant followed Malzahn from Auburn to UCF. If he can be an All-AAC performer, that unit could take a leap.

If you are looking for value outside of Cincinnati, UCF is the best option. They have a regular-season trip to Cincinnati but could see the Bearcats again in the AAC title game. Beating an opponent twice in one season is never easy.

Last year, Tulsa went 6-0 in conference play to reach the AAC title game, where they fell 27-24 to Cincinnati.

Coach Philip Montgomery had been under some heat entering last season and surprisingly it was their defense that led them to a strong record. That group loses only one starter. It was their best player, LB Zaven Collins, a first-round NFL pick, but ten returning starters gives the defense a strong chance to shine again.

Nine returning starters on offense means that there is also a solid foundation on that side of the ball. QB Davis Brin has modest game experience, but he stepped in to lead the Golden Hurricane to a comeback win at Tulane last season.

Tulsa has a tough schedule in and beyond the conference. They have value, but repeating last season will not be easy with the talent elsewhere in the AAC.

Last year was the first year for coach Ryan Silverfield, who took over the program after Mike Norvell’s departure for Florida State. The Tigers had a solid 8-3 debut under Silverfield, but can the success continue this season?

Memphis has a fair amount of players returning but they turn things over at quarterback with Brady White’s tremendous run ending. Arizona transfer Grant Gunnell has high-level experience, but replacing White is a tough task.

This year will be a better indicator of where the Tigers can go with Silverfield, but it won’t necessarily be considered an underachievement if they fall short of the AAC title game.

Memphis does have to visit Houston, Tulsa, and UCF in conference, and they host Mike Leach and Mississippi State out of conference. Avoiding Cincinnati is nice, but the Tigers are not likely to end up vying for the AAC title. UCF and Tulsa are the best non-Cincinnati options.

Coach Willie Fritz gets some love in coaching searches because of his ability to coach offense. And offensive success should lead the way for the Green Wave again this season.

Last year the Green Wave was first in the AAC in rushing, and freshman quarterback Michael Pratt threw for over 1,800 yards and tallied 28 total touchdowns (20 passing, eight rushing) in 10 games. Their offensive line returns four starters giving Tulane a great chance to move up in the conference.

Unfortunately, the schedule is a monster. They start with Oklahoma and have Ole Miss and defending Conference USA champion UAB in non-conference play. Then when AAC play starts they don’t have it easy. In the middle of the season, they host Cincinnati and visit UCF in back-to-back weeks. A finale at Memphis could be tough too.

There is a good chance Tulane’s record will not be reflective of their performance. I like the trajectory they are on, and they are a great team to back as an underdog because of their offense.

The first couple of seasons for coach Dana Holgorsen at Houston were not much to write home about. More success this season will hinge on a defense that returns 9 starters and whether QB Clayton Tune can be more precise with the ball. Tune threw 15 touchdown passes last season, but he also had ten interceptions.

Houston has to make positive strides this season, but will they? The biggest thing the Cougars may have going for them is their schedule, which does not feature regular-season matchups with Cincinnati or UCF. To win the AAC, they will likely have to beat one of those two teams in the title game, which looks unlikely at this point.

SMU and coach Sonny Dykes are getting lots of positive buzz for their recruiting prowess, but will that lead to conference success?

They can be a player in the AAC thanks to an offense with nine returning starters. The key will be at quarterback, where Oklahoma transfer Tanner Mordecai looks like the guy. The defense needs to do enough to keep them in games, but will it? SMU was 5-0 and ranked last season, but defensive struggles contributed to a 2-3 finish.

This season could end up much the same way. Their early schedule is favorable other than a rivalry matchup with TCU. But their final six games are against the teams ahead of them in the AAC odds. They are not an attractive sleeper option as a result, but their games will be entertaining.

If all you need for a breakthrough season is a lot of returning starters then East Carolina is a team to have on your radar.

The Pirates might have only won three games a year ago, but they return apiece on offense and defense. Quarterback Holton Ahlers comes with multiple seasons of starting experience and is poised for a big year, which could enhance his NFL prospects.

ECU’s non-conference schedule is going to include three very physical opponents in Appalachian State, South Carolina, and Marshall. I worry that they might get beat up a little too much. They do host both free squares on the AAC board in USF and Temple, so an improvement on their three AAC wins last year is very possible. But will they threaten the conference’s contenders?

Predicting a service academy’s success is tricky, but Navy’s 3-7 record last season was a below-par year for longtime coach Ken Niumatalolo and the Midshipmen. Niumatalolo heads into his 14th season as coach with 101 wins, including ten winning seasons and six seasons with nine or more wins.

Will the wins return this season? Navy is not going to change their offensive approach, but they were not the machine we are used to seeing last season. But on defense, eight returning starters provide a lot of optimism. In their last three games, all losses, they did not allow more than 19 points. In almost any other year those games would have been wins, and losing 15-0 to Army must really be sitting poorly with the Middies.

Navy is not a sleeper for the AAC title this season but should be better. They have not had consecutive losing seasons under Niumatalolo.

When Jeff Scott left Clemson for his first head coaching gig, USF looked like a great spot. It still might be, but last season’s 1-8 disaster was a big drop for a program only a few seasons removed from a 10-win campaign.

The Bulls did have one single point loss and another by two points, and they did put up 46 points in a competitive loss to UCF to end the season, so it wasn’t all bad. Nine starters return on offense, but the quarterback competition is open after Jordan McCloud transferred to Arizona. But they did make a major pickup in Miami transfer Jarren Williams, who threw for over 2,000 yards and almost 20 touchdowns in 2019 for the Hurricanes.

If Williams can win the starting job and have a productive year, the Bulls could see some improvement this season. But they are not close to being a contender in the AAC.

The Owls were 1-6 last season, with their only win coming over South Florida. Will year three under Rod Carey see them returning to winning ways? They had five straight winning seasons from 2015-19 under Matt Rhule, Geoff Collins, and Carey.

The outlook for year three is not promising. They begin the season at Rutgers and then at Akron, neither of which are certain wins. There is some returning talent but nothing that stands out. Sophomore quarterback Re-al Mitchell picked up some experience last season and has promise, but how far can he take the team?

Look for Temple to take some lumps again, which could put Carey’s job in jeopardy. There is no betting value here unless you are a Temple fan.

Bet To Make: Cincinnati deserves to be the favorite in the AAC. You have to pay a premium but it is not a crazy hold on your money. The bet I like more is UCF, unless you are worried about the new coach for the Knights. I would be surprised if these two teams are not in the Championship Game. Then you can make the call whether to double down on UCF or hedge your bets. At +450 with the best QB in the league, that is a great play.