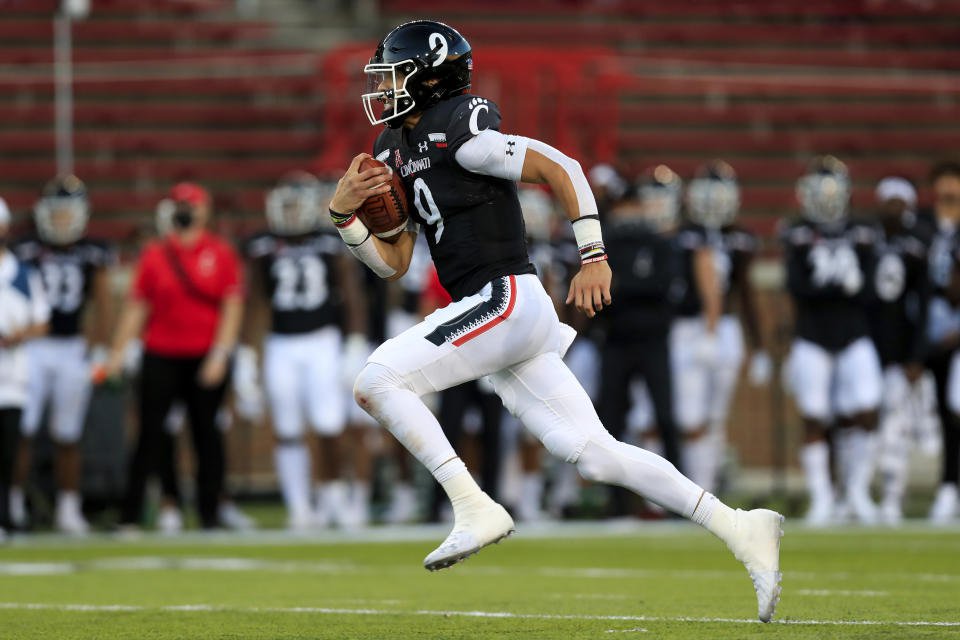 The American Athletic Conference almost found its way into the College Football Playoff last season. Among the Group of 5, the AAC is perhaps the best, top to bottom, in 2021.

Cincinnati and Tulsa finished a perfect conference schedule last season, but it’s Cincinnati alone at the top of the list for 2021. The Bearcats are building on last season’s momentum and are strong –200 favorites to win the AAC; Tulsa is picked fifth best, at odds of +1200.

Using the numbers released by BetMGM recently, here’s a look at the top teams’ win totals, along with the odds to finish atop the conference, and whether those numbers fit with the returning talent and the schedule.

Cincinnati’s most optimistic followers can see a College Football Playoff in their future, and, with a couple of big-time nonconference victories, it’s possible.

Bearcats fans won’t have to wait long, either, with the early-season challenge coming after home games against Miami (Ohio) and Murray State. On Sept. 18, Coach Luke Fickell leads Cincinnati on the road to Indiana before an off week. The Bearcats then head for South Bend, Indiana on Oct. 2 to take on the Notre Dame Fighting Irish.

A win in either of those big games could well secure the “over” because not only does Cincinnati miss Houston and Memphis this season, it hosts SMU and UCF. The toughest conference road game appears to be at Tulane.

Quarterback Desmond Ridder should challenge UCF’s Dillon Gabriel for the top offensive player in the conference.

For a team that finished perfect last season except for a three-point loss to the Georgia Bulldogs in the Peach Bowl, the Bearcats believe they’re capable of going “over” the expectations and taking that huge next step.

Should bettors immediately invest in Gus Malzahn? The former Auburn coach begins season No. 1 at Central Florida, inheriting a traditionally strong offense – the polar opposite of his defense.

The 9.5 win total will hinge strongly in part on the UCF opener, a home game against Group of 5 power Boise State in which UCF has been installed a 3.5-point favorite.

An ESPN-televised Friday night game on Sept. 17 at Louisville and a visit to Cincinnati in October are clear targets that, with a pair of victories, would provide the inside track to the “over” 9.5.

Whether it’s an “over” or an “under,” the Knights will again be entertaining, having rung up an average of 40+ points per game from 2017-20. Quarterback Dillon Gabriel will have big stats again, but the team’s record will depend on how much impact Malzahn’s defense – with a few transfers – can hold up.

Houston misses UCF and Cincinnati on the conference slate, and hosts SMU and Memphis. Looks like a big chance for the “over” here?

Coach Dana Holgorsen looks to benefit from “his” guys as he enters his third year with the Cougars, who won only seven of their first 20 games under the head coach.

Houston put up more than 30 points per game, and quarterback Clayton Tune should have a better feel after a full season at the sport’s most important position.

The Cougars don’t leave Houston for a game the entire month of September, beginning the schedule with a huge nonconference game at NRG Stadium, home of the the NFL’s Houston Texans, against Texas Tech.

The Red Raiders are a slim 2.5-point favorite against the Cougars.

Following that big one, Houston visits Rice before hosting Grambling State and Navy.

The eight-victory over/under for Memphis is seemingly reachable in a season without Cincinnati on the schedule.

But the Tigers must play at Tulsa, UCF and Houston, along with a home game against the SEC’s Mississippi State.

While the running game looks to be in good shape with the top four RBs back, a major question is the quarterback void left by Brady White. Last year’s starter for Arizona, QB Grant Gunnell, is among the candidates.

With as many as nine starters back on defense, though, the uncertainty on offense should be balanced by a strong “D” this season.

The SMU Mustangs, with coach Sonny Dykes in charge, have won 17 of 23 games the past couple of seasons.

Just like Memphis, though, the question at quarterback has to be solved. Tanner Mordecai, who lost his battle at Oklahoma with Heisman candidate Spencer Rattler, figures to be firmly in the mix to start at QB.

The Tulsa Golden Hurricane own the top spot for September difficulty, hitting road for games against Oklahoma State and Ohio State back to back. Tulsa hosts Houston and Memphis, but meets Cincinnati and SMU on the road this season.

Those two Power 5 non-conference games likely mean that Tulsa will have to find six wins from among the other 10 games.

The Golden Hurricane played for the AAC title in the conference championship game last season, but they did lose a first-round NFL Draft pick from a defensive unit that gave up under 22 points per game last season.

The remaining five teams figure to have a challenge to reach the .500 mark

Tulane, 5, –130, +110, +1400: Schedule keys for the Green Wave include a home opener against Oklahoma and a road date with Mississippi. UAB, Morgan State, East Carolina and South Florida would appear to be four big chances at victory. Tulane enters the season seeking a fourth straight bowl appearance under coach Willie Fritz.

E. Carolina, 4.5, -145, +120, +8000: Schedule keys include road games at UCF, at Houston, at Memphis and a home game against Cincinnati. That’s rough. The hope is that a strong rushing game (173+ yards per game last season) will serve to help protect improving quarterback Holton Ahlers.

Navy 3.5, +100, -120, +10000: Schedule keys include games against Marshall, Air Force, Notre Dame and Army, and the conference schedule doesn’t help. Coach Ken Niumatalolo hopes to follow a recent trend: 3-10 in 2018, 11-2 in 2019, 3-7 last season. It’s time for a big bounce-back season, but the 3.5 win total would suggest another long season is in the cards. Navy finds no real breaks in the AAC slate with road games at Houston, Memphis and Tulsa, and then a home game with Cincinnati.

Temple 3, –110, -110, +20000: Schedule keys, aside from a winnable matchup with the FCS Wagner Seahawks, point to another tough lineup of AAC foes: Houston, Memphis, UCF and Cincinnati are all on the Temple slate this season. And then there’s a nonconference pair against Rutgers and Boston College.

South Florida 2.5, -120, +100, +10000: Schedule keys indicate home games with Florida A&M and Temple could be the best hopes for victories under second-year coach Jeff Scott. A third victory to go “over” may not happen during a challenging season. Among those tougher challenges are games at NC State, vs. Florida and a road game at BYU.