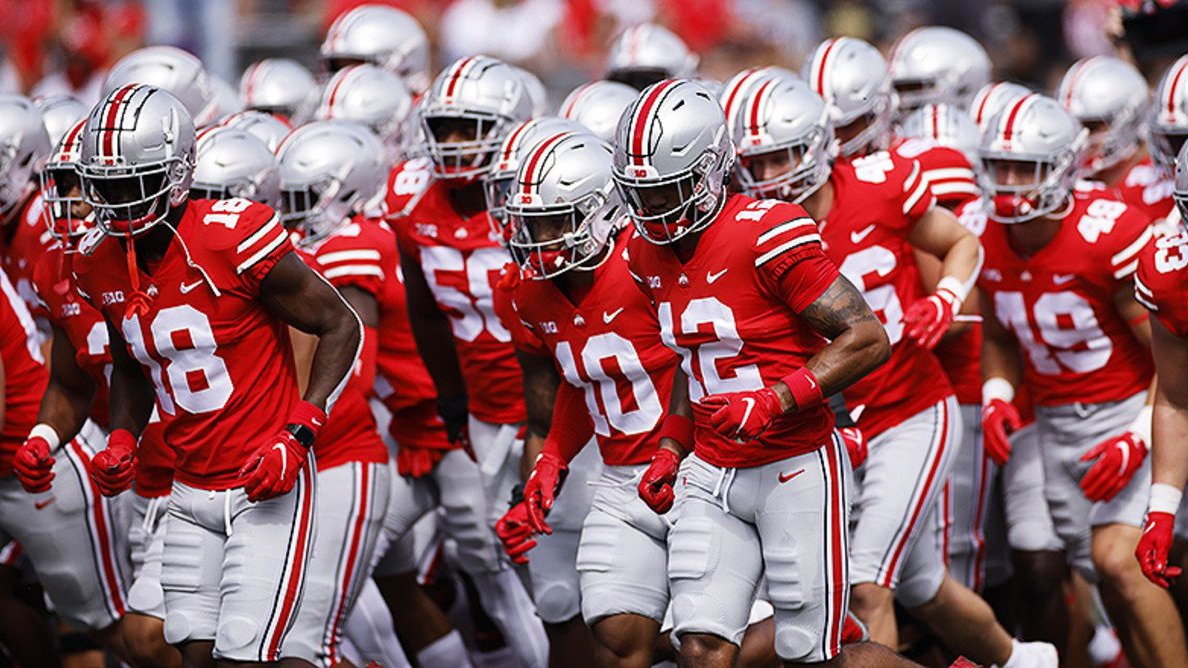 The Big 10 Conference has 2 divisions, the West and the East. Each division holds 7 teams, which makes for a 14 team conference. The winner of each division has a chance to play for the Big 10 Championship at the end of the regular season.

Last season, the Michigan Wolverines were the champions of the East, and the Iowa Hawkeyes won the West. In the Championship game, Michigan was victorious in a blowout 42-3. They would also advance to the College Football Playoff as the #2 seed.

Looking ahead to 2022, Ohio State and Wisconsin look to be the favorites according to Caesars Sportsbook. The Buckeyes missed out on there chance at the Playoff last season, and are looking to return for the 3rd time in 4 seasons.

The East Division in the Big 10 is quite spread out, as there are only two true favorites heading into the season. Much like last year, it will be between Ohio State and Michigan unless a surprise contender emerges once the season gets underway.

Ohio State and Michigan faced off at the end of the regular season last year, both with a chance at the Playoff. Michigan ended their winless drought against their hated rivals and moved on to the playoff following a Big 10 Championship blowout win over Iowa.

As we look into the 2022 regular season, Ohio State is a huge favorite in the division, as well as the overall conference. They begin the season as the #2 team in the country, and their schedule look favorable. They get Notre Dame and Michigan at home, which will make their two hardest games of the year even easier.

Michigan doesn’t have nearly as hard of a schedule, as their three non-conference games are against Colorado State, Hawaii, and Connecticut. None of those teams are even close to the Top 25, and Michigan will be heavily favored.

Ohio State is the pick for the division title, as they likely only have to get past Michigan at the end of the season to clinch the title. The rest of the conference schedule doesn’t look too intimidating, and as the second best in the NCAA, it will be hard for teams to get past them.

The West Division is not as easy to predict this year. The odds are very tight, and we could very well see a 5-way fight towards the end of the year. However, since we are going off of the odds, the two teams we will focus on are the Wisconsin Badgers and the Nebraska Cornhuskers.

I don’t see Iowa making a run and repeating as the division champion, so this opens the door for Wisconsin dramatically. The Badgers do have the best odds, but they have to travel to Ohio State, Nebraska, and Iowa for road games that will test their fate.

Nebraska’s schedule looks favorable to start, but their last 3 games are against Wisconsin, Michigan, and Iowa. I expect them to start hot and make a run early, but towards the end of the year, there might be a fall off in production.

With multiple teams from the division slated for the Top 25, there will be many close games and good defensive battles. The running game will be key for any team wanting to make it out of the division or conference, as the Big 10 has had a history of great rushing attacks.

If I had to make a pick this early, it would be Wisconsin to win the West. Their schedule look easier to overcome late in the year, and other teams will probably have the same struggle as there are so many teams close in offensive production.

Based on the two teams, Wisconsin and Ohio State, it is an easy pick for the conference champion. Ohio State will return to form and make a great run at their 3rd Playoff appearance in 4 years.

As stated, Ohio State really only has one test within the conference, and that game against Michigan is at home in the Horseshoe. After a disappointing end to last season, the Buckeyes are once again the team to beat in the Big 10.