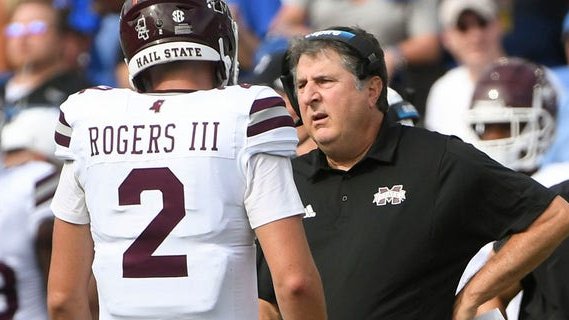 In terms of the matchup itself, the Liberty Bowl may not register with many as one of the top matchups of the college football bowl season. But in terms of storylines, it can’t be beaten by many of the remaining games.

Over a decade after a contentious departure from Texas Tech, Mike Leach faces the Red Raiders for the first time as his Mississippi State team takes on the Red Raiders in Memphis.

Leach still has a score to settle with his former employer, who he still feels owes him for his termination in 2009. Will the Bulldogs help him settle that score on the field?

Leach will see some familiar faces on the opposite sideline in Memphis, including Texas Tech interim coach Sonny Cumbie. Cumbie, who has been interim coach since Matt Wells was fired in October, was Texas Tech’s starting quarterback in 2004 and a graduate assistant in Leach’s final season.

Any fondness there won’t mitigate how badly he will want this win, however. And you can be sure his players will be aware of the significance of this meeting.

But will motivation translate into a win for one of the strangest teams in college football? Mississippi State beat North Carolina State, Texas A&M, Kentucky, and Auburn during the season, so they are certainly no slouch. But they are in the Liberty Bowl and not a much more prominent bowl because of one-score losses to Memphis, LSU, and Arkansas.

Mississippi State is obviously going to throw, throw, and throw some more. Second-year QB Will Rogers is the latest from the Air Raid assembly line and made a big leap from year one to year two. Here’s how his numbers stack up for the season.

Rogers also led the Bulldogs back from 20+ point deficits against Louisiana Tech and Auburn and nearly them back against Memphis, LSU, and Arkansas. So, he won’t be fazed even if Texas Tech pulls ahead.

Will the Red Raiders be able to slow Rogers down? The odds are not favorable. Texas Tech enters the Liberty Bowl as one of the worst teams in the FBS when it comes to defending the pass. And while Mississippi State will be missing top NFL Draft prospect Charles Cross at left tackle, the Red Raiders are also one of college football’s worst teams when it comes to getting the QB on the ground.

Assuming Texas Tech performs up to its season standard there, the Red Raiders will need to score to keep up. Freshman QB Donovan Smith did have some good moments after taking over. But over their last five games, the Red Raiders scored more than 24 points only once, in a win over Iowa State.

Whatever they do on offense, they will be doing it without leading receiver Erik Ezukanma. Ezukanma, who had 48 catches for 705 yards and four scores this season, opted out to prepare for the NFL Draft. Top Mississippi State cornerback Martin Emerson opted out for the same reason, so we won’t see the matchup that we could have there.

Texas Tech will move the ball and score some points, but it won’t be enough to keep the Bulldogs from posting a comfortable win, at least in terms of margin.

As much as the Red Raiders will know that the ball will be in the air early and often, stopping it is an entirely different matter. I don’t anticipate Texas Tech doing that nearly enough to win this one. Another big day for Rogers and the Mississippi State aerial attack will help bring Leach a victory that he will certainly savor.

The 2022 Formula 1 season is only six races deep, but the race for this season’s championship alerady appears to be down to just two drivers. Last season, Red Bull driver Max Verstappen claimed his first Formula 1 World Drivers’ Championship in highly controversial circumstances, with Lewis Hamilton denied what would have been a record-breaking END_OF_DOCUMENT_TOKEN_TO_BE_REPLACED