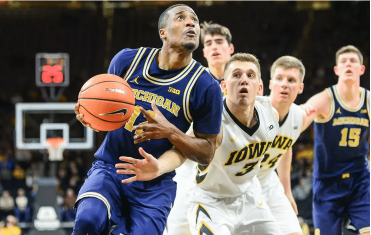 For Wisconsin, they come in on a six-game winning streak, a streak that started with a win over Michigan at home (64-54) back on January 19th. In that game, forward Ethan Happ played outstanding as he scored 26 points, pulled down 10 rebounds and had 7 assists. The Badgers will look to sweep the home and away with Michigan on Saturday. For the Wolverines, they seem to have turned it around a little, since losing to Wisconsin, as they have won four of their last five, although they did lose 74-59 to No. 20 Iowa last Friday. Wisconsin and Michigan will match up Saturday with tipoff scheduled for 12:00 pm ET.

In this contest, the Michigan Wolverines come in as 5.5-point favorites playing at home. The over/under for this game is set at 121.5 points.

On the defensive end, Michigan is one of the best teams in the nation. They currently rank 2nd overall, allowing 57.3 points per game. Don’t discount Wisconsin’s defense, though. They rank 8th in the country in scoring defense, allowing just 61 points per game. Both teams are especially stingy in opposing field goal percentage. Wisconsin is allowing opponents to shoot just 39.3% from the field (16th overall) while Michigan is allowing opponents to shoot 39.6% from the field (18th overall).

Wisconsin Hopes To Make It Two In A Row Against Wolverines

Just like in the first game against Michigan, most nights the offense for the Badgers runs through senior forward Ethan Happ. On the season, Happ is averaging 18.3 points, 10.4 rebounds, 5.1 assists, 1 steal and 1.2 blocks per night. He is also shooting 55.2% from the field.

Outside of Happ, the Badgers have two other starters averaging double-digits. D’Mitrik Trice is averaging 13.4 points, 2.9 rebounds and 2.7 assists per game while Brad Davison is scoring 11.2 points, 3 rebounds, 1.8 assists and 1.2 steals per game. Still, with only one other player averaging over 5 points a game (Nate Reuvers, who is averaging 8.3), most of the scoring responsibility will fall on Ethan Happ, and you can be assured that Michigan will try to focus in on after he torched them in the last game.

The Wolverines have only lost two games all season; however, the two games they have lost have both been against Big Ten foes in Wisconsin and Iowa. On Saturday, they will be looking for redemption from their first loss.

Leading the team for Michigan is freshman forward Ignas Brazdeikis. On the season, Brazdeikis is averaging 15.5 points while shooting 46.9% from the field, 78.1% from the free throw line and 39.8% from behind the arc. He is also averaging 5.5 rebounds and 1 assist per game.

Take Wisconsin And The Points

These two teams are just very similar all the way around. They both play memorizing defense, holding opponents to 61 points or less per night, but neither team is particularly dominant on the defensive side. As a result, I envision a relatively low scoring game. With that in mind, with the two teams being so similar and defense being the name of the game for both, I see this one staying relatively close throughout. Michigan might end up winning this game, especially as a revenge game at home, but for my money, I will take the Badgers and the 5.5 points.