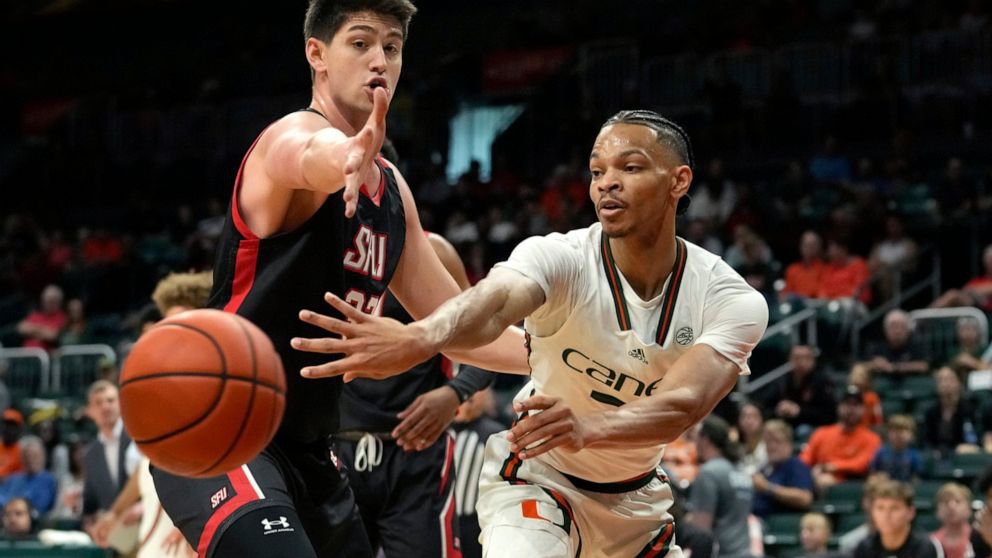 After seeing their undefeated start to the season end against Houston last Saturday, Virginia faces another challenge tonight as the Cavaliers visit Miami in a matchup of ranked ACC teams.

The action from the Watsco Center in Coral Gables is scheduled to tip off at 8:30 pm ET, and you can catch it on ACC Network.

The Cavaliers (8-1, 1-0 ACC) went into Saturday’s matchup with the Cougars having moved to second in the rankings thanks to Houston’s loss to Alabama the previous weekend. But the Cougars served a reminder of why they were ranked number one prior to that loss with a 69-61 win in Charlottesville.

They dropped four spots in this week’s AP Poll and avoiding a further fall will require a strong effort against the Hurricanes (11-1, 2-0 ACC), who have won seven straight games since a loss to Maryland on November 20.

The Hurricanes have been putting up a lot of points recently, but can they keep that going against one of the top defensive teams in college basketball? Keep reading for our Virginia vs Miami prediction, as well as our betting picks for tonight’s only ranked versus ranked matchup.

Game odds are via FanDuel as of Tuesday, December 20, 2022, at 4:30 pm ET. This article may also include odds from our other recommended legal sports betting sites.

Can the High-Scoring Hurricanes Keep Rolling Against Virginia?

But they have turned things up a notch over their last four games, scoring 80+ points in each game.

Of those four teams, NC State ranks the highest in defensive efficiency at KenPom, coming in at 70th. The other three rank 162nd (Louisville), 264th (Cornell), and 357th (St. Francis).

So, they face a bit of a tougher task against Virginia, who is raned 11th in defensive efficiency even after Saturday’s game, which was not one of their finest defensive performances.

It was the fifth time already this season that the Cavaliers had allowed 60+ points, including all three of their games against ranked foes.

Virginia Versus Ranked Opponents in the 2022-23 Season

Miami’s season low in points thus far is 66, which came in a two-point win over UCF on November 27. On the other end, the Hurricanes have allowed 60+ points in nine of their 12 games.

Louisville, who is one of the worst teams in the country is averaging just 60.6 points per game, is the only power conference team to not score at least 60 points against Miami this season.

Miami Versus Power Conference Opponents in the 2022-23 Season

Virginia vs Miami Prediction and Picks

Miami hasn’t had a test of this level yet this season, and the best opponent they have faced, Maryland, beat them soundly.

But a result that can’t be overlooked is the Hurricanes’ win over Rutgers, who ranks fourth in adjusted defensive efficiency at KenPom. Against the Scarlet Knights, they shot 49.1 percent from the field, which is the highest percentage any team has shot against them this season.

Miami also has some valuable experience against teams who play slow like Virginia, who ranks 361st in adjusted tempo at KenPom. To open the season, they beat Lafayette (359th) 67-54, and UCF, who they beat 66-64, ranks 354th in that category.

Last time out, Miami scored 91 points against St. Francis without Nijel Pack, who missed the game due to illness. But he is slated to return tonight, so they will have all four of their double-digit scorers in action.

I’m not fading Virginia just because they didn’t come through for me against Houston on Saturday. But I really like Miami to take the win tonight at home, and I also like the over to hit for the sixth time in ten Virginia games.

This will be a serious test for the ‘Canes, but they have the talent and the scorers to pass it with flying colors.