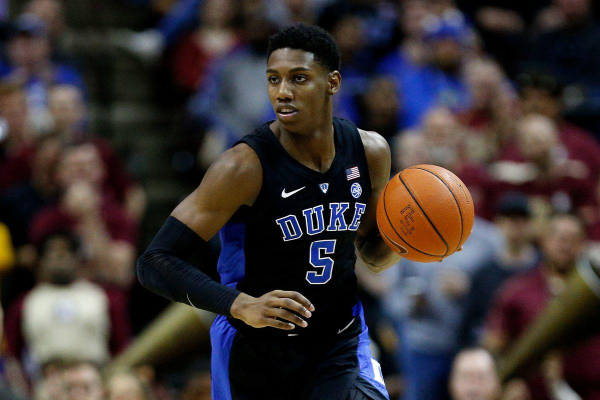 All eyes will be on Cameron Indoor Stadium on Saturday night as two of the top teams in the country collide. The Duke Blue Devils will host the Virginia Cavaliers in a battle of the top two teams in the Atlantic Coast Conference. Virginia also has a chance to move up to number one in the rankings with a victory over Duke in this game.

Virginia is off to a 16-0 record this season, and enter this game as the fourth-ranked team in the country. The Cavaliers have won their first four ACC games of the season in convincing fashion, and they won’t be afraid of playing in front of the Cameron Crazies. Duke suffered a loss in their previous game and will be looking to get back on track. The top-ranked Blue Devils are 14-2 on the season and are 3-1 in ACC play. Duke is a 2.5 favorite over Virginia in this game.

Life Without Jones Begins For Duke

Duke will be without point guard Tre Jones for an extended period. Jones was injured in the loss against Syracuse University, and the Blue Devils did not look like the same team. Duke must find a way to get into their offense without Jones handling the ball, and they will also miss the tone that he sets on defense. Jones was averaging just 8.1 points per game but was close to six assists per game. Duke is averaging over 90 points per game this season while giving up just 66. The Blue Devils will need to be sharp to beat a veteran Virginia team on Saturday night.

Even without Tre Jones on the floor, Duke still has one of the most talented teams in the country. RJ Barrett leads the Blue Devils with more than 23 points per game this season and can score points in a hurry. Zion Williamson is an absolute freak and is averaging 21.2 points and 9.4 rebounds per game this season. These two freshmen are incredibly talented, but they have yet to face a defense like that of Virginia. This will be the best test of the season for the young Duke team.

Virginia Solid On Both Ends

Most people will associate great defense with Virginia, but the Cavaliers have excelled at both ends of the floor this season. Virginia is putting up over 74 points per game so far this season, which is better than the average college basketball team. The Cavaliers have a trio of experienced and talented players that can all score the basketball. And yes, Virginia is still playing defense at a high level. The Cavaliers are giving up just over 51 points per game, which is the best scoring defense in division one. Tony Bennett’s team looks like a real contender to reach the Final Four this season.

Kyle Guy was a first-team All-ACC performer a season ago, and he looks like a lock to make the team again. Guy is averaging 15.3 points per game while making close to 47 percent of his three-point attempts. De’Andre Hunter and Ty Jerome have combined for 27 points and nine rebounds per game, giving Virginia three extremely solid performers. The Cavaliers are shooting close to 50 percent from the field, and are one of the most offensively efficient teams in college basketball.

Duke has looked almost unbeatable all season long, but missing Tre Jones is a huge loss. The Blue Devils just didn’t look right after Jones went down, and their offense will struggle against a tough defense. The Cavaliers won’t be afraid of Duke, and they will head into Cameron Indoor Stadium and win the game. Take the points and bet the Virginia Cavaliers +2.5 over the Duke Blue Devils.