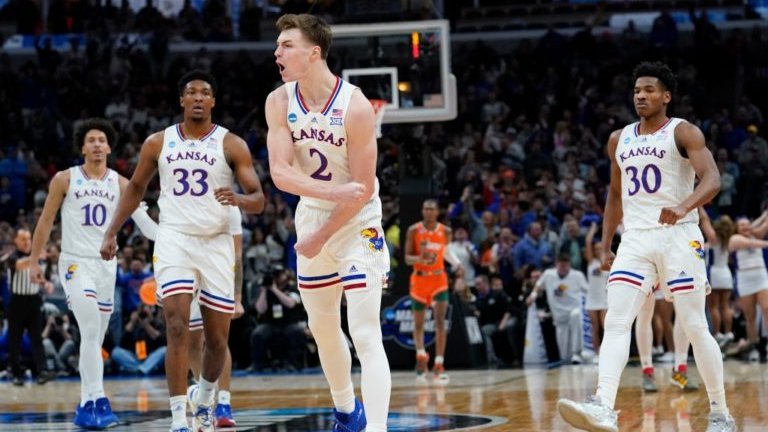 Four years ago, Villanova and Kansas met in the Final Four at the Alamodome in San Antonio, Texas. In that matchup, the Jayhawks were no match for the Wildcats, who won 95-79 and went on to similarly dominate Michigan to win the national championship two days later.

Will Saturday’s Final Four rematch in New Orleans have a different result?

In that meeting, both Villanova and Kansas were #1 seeds, with the Jayhawks winning the Midwest Region as they did in this year’s tournament. But the Wildcats made a Final Four-record 18 threes and shot 55.4 percent from the field in a dominant win. In the championship game, they dispatched Michigan by 17 to close out a championship run in which they won all six NCAA Tournament games by double digits.

While that Villanova team might have been one of the best that we have seen in recent college basketball history–it featured current NBA players Mikal Bridges, Jalen Brunson, Donte DiVincenzo, and Eric Paschall–were the Wildcats to win this year’s championship, it would be an even bigger achievement, as they will be in New Orleans without one of their most important players, guard Justin Moore.

Kansas, meanwhile, is two wins from its first national title since 2008. The Jayhawks are in a Final Four in New Orleans for the fourth straight time, following appearances in 1993, 2003, and 2012. They did not cut down the nets in any of those appearances, but as the lone #1 seed to make it to the Final Four this year, anything less than a championship will be a major disappointment for KU.

Can the Wildcats Win Without Injured Star Moore?

In the final minute of Villanova’s Elite Eight win over #5 seed Houston, junior guard Moore went down with a torn Achilles. Moore and Collin Gillespie have been the Wildcats’ best all-around players this season, so this is a huge loss for the team. Along with being one of their top offensive threats, Moore is also an excellent defender.

Here are his numbers for the season:

With only six players taking up most of the minutes, Villanova is not an especially deep team as it is. That makes Moore’s loss all the more significant.

With Moore out, look for reserve guard Bryan Antoine, who has played in 19 games and is averaging 9.5 minutes per game, to get more minutes. Antoine, a junior, is a former five-star prospect whose collegiate career has been hampered by multiple injuries. But he is set to be called upon to make an impact on one of the biggest stages in sports.

Beating Kansas starts with continuing to play great defense, which is where the Wildcats have been the most consistent in the NCAA Tournament and throughout the season.

In the South Regional final against Houston, they were tremendous on the defensive end. The Cougars shot only 29.8 percent (17 of 57) from the field overall, and they made only one of their 20 three-point attempts.

Villanova needed every bit of that defensive excellence as well, along with a 15 of 15 performance from the free-throw line, given how bad they were on offensively against Houston’s own stout defense.

Villanova’s defense success in the NCAA Tournament is why they are in the Final Four, Kansas has been pretty solid in that department for the most part.

In the second round, Creighton hit a dozen threes and shot almost 43 percent from three, and the Jayhawks gave up 35 points in the first half of their Midwest Regional final win over Miami (FL). But for the tournament, the Jayhawks’ four opponents have shot only 34.2 percent (82 of 240) overall from the field and 25.6 percent (22 of 86) from three.

Their performance in the second half against the Hurricanes was absolutely outstanding, as they outscored Miami 47-15 after trailing by six at halftime.

The last thing anyone needs to do is underestimate any Villanova team, even with one of its best players sidelined. But Kansas has a clear advantage here, especially when the Wildcats’s offensive numbers have dipped with each game in the tournament.

Kansas is also the biggest challenge Villanova has faced defensively. With Remy Martin, who is shooting over 54 percent from the field and averaging 16.7 PPG in the NCAA Tournament, and Ochai Agbaji coming off of his best game of the tournament (18 points, 8-12 FG, 2-2 3PT, five rebounds, four assists, four steals) against Miami, the Jayhawks head to New Orleans in a strong position.

Villanova won’t go quietly at all. Jay Wright teams rarely ever do so. But look for Kansas to prevail and advance to Monday night’s championship game against North Carolina or Duke.