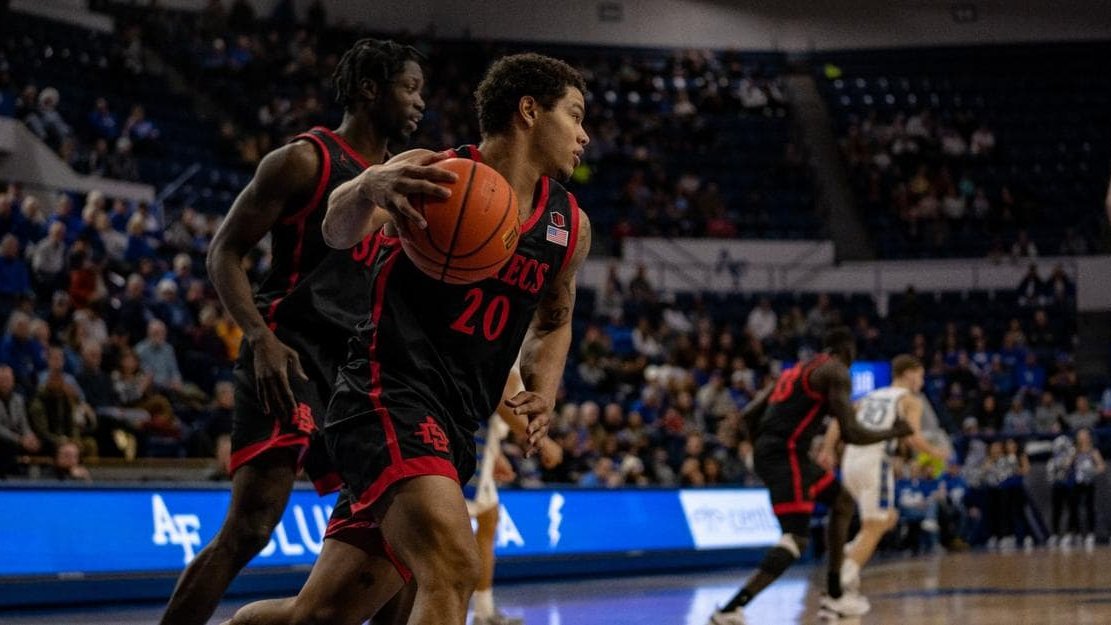 Tonight’s college basketball schedule will close out with a big game in the Mountain West, as first-place San Diego State (15-4, 6-1 Mountain West) will welcome to Utah State (16-4, 5-2 Mountain West) to Viejas Arena.

Tonight’s matchup between the Aggies and Aztecs is set for an 11:00 pm ET (8:00 pm local time) start time, and you can catch the action on CBS Sports Network.

Entering tonight, San Diego State is alone atop the Mountain West standings, but a group of teams is hot on their heels.

Right now, SDSU, Boise State, and New Mexico are all projected to make the NCAA Tournament, while ESPN’s latest Bracketology update has Utah State and Nevada as two of the “Next Four Out” teams along with Florida and Wake Forest.

So, tonight is a big game for the conference’s hopes of having a serious chance at getting four or even five teams in the Big Dance.

Will the Aggies be able to pull off a big road win? Read on for our Utah State vs San Diego State basketball prediction, as well as our betting picks and analysis for tonight’s matchup at Viejas Arena.

Odds are via FanDuel as of Wednesday, January 25, 2023, at 6:55 pm ET. This article may also include odds from our other recommended legal sports betting sites.

Is Utah State Headed for a Third Straight Road Loss?

Utah State is back on the road tonight following close home wins over UNLV and San Jose State last week.

After being in control against UNLV, the Aggies fell behind a couple of times late in the game, but Steven Ashworth and Sean Bairstow hit a couple of big shots late to help deliver a 75-71 win.

Things were even more dicey against the Spartans on Saturday, as they trailed by six with under five minutes. But again, they did what they needed to do when they needed to do it, and in the end, Max Shulga’s free throw in the final seconds provided the winning point in a 75-74 win.

They can’t be as generous against San Diego State as they were against either of those two teams, or as generous as they were in their previous two road games, an 82-59 loss at Boise State on January 7 and an 85-70 loss at Nevada six days later.

All of that is rather ominous for tonight’s game. I have documented San Diego State’s offensive leap a number of times this season, and the latest example came in last Saturday’s 70-60 win at Air Force.

Prior to this season, if the Aztecs shot 26.7% from three and 38.6% from the field overall, they might have been staring at a difficult situation. Instead, they still scored 70 points against the Falcons in a 10-point win.

This season, the Aztecs are 11-2 when scoring 70+ points, and they are a perfect 7-0 when they have hit the 80-point mark. In conference play, they have scored at least 70 points in each of their six wins.

The Aztecs let me down the last time I backed them with a sizable spread, as they took their feet off the gas in the last several minutes against Nevada.

In that game, the Wolf Pack trailed by 21 points with under five minutes left but wound up covering the 9.5-point spread in a 74-65 SDSU win.

So, I’m not touching the spread here. I have been known to be pretty stubborn, but I do know when not to be occasionally.

I also got burned with the over on the team total that night, being denied the over 74.5 by a missed free throw in the final half-minute. But I do feel good about going back to the well tonight with that one, so I haven’t fully shed my stubbornness as it pertains to the Aztecs.