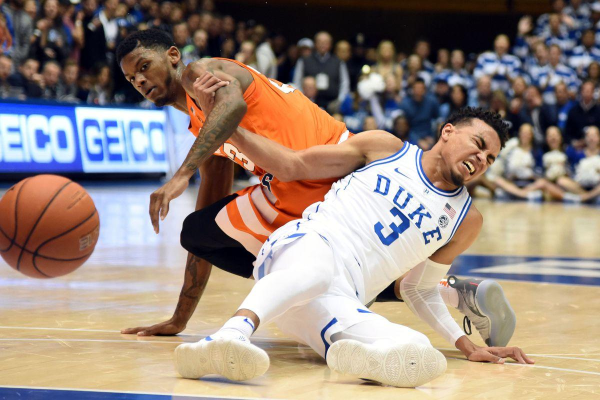 Football season is nearly over and that means we’re close to college basketball finally taking over the full spotlight. Let’s get caught up on some of the top headlines from the past week.

The Duke Blue Devils suffered their second loss of the season Monday night, falling to Syracuse at home 95-91. To be fair, the Blue Devils didn’t have Cam Reddish, who sat with an illness. Also, Tre Jones left the game in the 1st half with a shoulder injury. Nevertheless, Duke was at home against an unranked team, led 12-0 to start the game, and rarely trailed, so they should have been able to win the game behind 35 points from Zion Williamson and 23 points from R.J. Barrett. But it was the Orange that triumphed at Cameron Indoor.

Unfortunately for Duke, it doesn’t appear as if Tre Jones will be able to bounce back quickly. Jones has been diagnosed with a shoulder sprain, with Coach K saying he will be out “a while.” Jones is only scoring eight points per game, but he’s also dishing out more than five assists every time out. More importantly, the Blue Devils are not the same team defensively without him, so this could be a huge loss for Duke. On the bright side, after this week’s showdown with Virginia, Duke’s schedule is quite manageable until a tough stretch the second part of February.

With Houston losing last week, Virginia and Michigan remain the only two undefeated teams in the country. The Cavaliers are 16-0 after Tuesday night’s thrashing of fellow top-10 team Virginia Tech. Of course, that undefeated record could be at risk this weekend when Virginia hosts Duke. Meanwhile, the Wolverines have tied their best ever start to a season at 17-0. Just two of those wins have come by less than 10 points. With Duke losing earlier this week, Michigan could be poised to rise to no. 1 in the polls if they can win at Wisconsin this weekend.

Things haven’t gone well for the Baylor Bears this season, and they may get worse before they get better. Sophomore forward Tristan Clark is set to miss the rest of the season with a knee injury. Clark is the team’s second-leading scorer and one of only two Baylor players averaging double figures this season at 14.6 points per game. He’s also one of Baylor’s best rebounders and a huge defensive presence, averaging 2.4 blocks per game. Needless to say, the Bears could have used him in their five-point loss to Kansas over the weekend. However, Baylor did manage to knock off Oklahoma State on Monday.

Help doesn’t appear to be on the way for the TCU Horned Frogs. Coach Jamie Dixon stated Monday that guard Jaylen Fisher isn’t going to be back anytime soon due to continued knee problems. Fisher has now undergone three surgeries on his knee during his college career.

When healthy, he’s averaging 12 points per game and shooting 44% from three-point range. However, he missed the first three games of the season and has missed the last four games due to continued knee problems. In the last eight games he played, Fisher scored in double figures every game and the Horned Frogs went 8-0, so clearly, he’s vital to TCU.

The USC Trojans will continue to be without freshman Kevin Porter Jr. for the foreseeable future. Porter was suspended prior to Sunday’s loss to Oregon for “personal conduct issues,” and head coach Andy Enfield has labeled the suspension as indefinite. Porter, a top-50 prospect in last year’s recruiting class, only recently returned from a thigh injury that caused him to miss seven games.

Rumors have circulated that Porter would be leaving the program, but he quickly squashed such speculation on social media, reiterating his commitment to USC. Porter has played in just seven games, averaging 10.7 points. The 9-8 Trojans recently lost Jordan Usher, who left midseason to transfer to Georgia Tech, so they can’t afford another permanent loss to their roster.

Out A Little Longer

St. John’s star Shamorie Ponds may be on the shelf a little bit longer than expected. Ponds, who’s averaging over 20 points per game, strained his back, forcing him to miss Saturday’s loss to DePaul. Head coach Chris Mullins says Ponds is listed as day-to-day and unlikely to play Wednesday against Creighton. The Red Storm have dropped out of the polls, having gone 2-3 since the start of Big East play. They run the risk of continuing to spiral as long as Ponds remains on the sidelines.