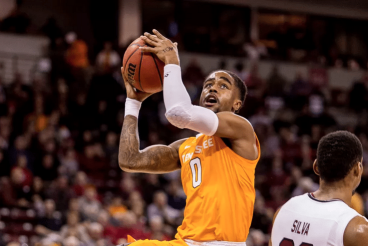 For the Volunteers, they have won 15 games in a row since their lone loss to No. 11 Kansas 87-81 back at the end of November. Since then, they have been riding high and are looking to continue their solid play against the Aggies. For Texas A&M, they have had an inconsistent season and have lost 4 of their last 5 games. They will look to shock the college basketball world if they can pull off an upset against the top-ranked Volunteers at home. Saturday’s matchup between Tennessee and Texas A&M will tip off at 8:00 pm ET.

In this contest, the Tennessee Volunteers come in as 11.5-point favorites despite playing on the road. The over/under on total points scored comes in at 149.5.

On the offensive side, Tennessee ranks as one of the best in the country at 7th overall, averaging 86.4 points per game. They are even better in efficiency, ranking 2nd in the nation, shooting 51% from the field. Their team distributes the ball well, too, as they rank 3rd, averaging 19.7 assists per game as well as in assist turnover ratio at 1.69. The Aggies, on the other hand, are only averaging 71.5 points per game, good for 230th in the country.

Anytime that you are a good team going into a much weaker team’s home arena, you have to be careful of the proverbial trap game. Even though Texas A&M should be a walk in the park for the Volunteers, coach Rick Barnes needs to make sure his team stays focused.

Speaking volumes to their dynamic offense, the Volunteers have five players who are scoring double-digits. The two leading scorers are Grant Williams and Admiral Schofield. For Williams, a junior forward, he is averaging 20.4 points, 7.3 rebounds, 3.4 assists, 1.3 steals and 1.5 blocks per game. He is also shooting a whopping 57.3% from the field. For Schofield, a senior guard, he is averaging 17 points, 6.7 rebounds, 2.7 assists and 1 steal per game.

Aside from these two, the other double-digit scorers include Jordan Bone (13.4 points, 6.4 assists), Lamonte Turner (11.6 points), and Jordan Bowden (10.9 points, 3.2 rebounds). In addition to these players, forward Kyle Alexander is also having a nice season, scoring 8.9 points and pulling down 7.2 rebounds per game.

While the Aggies were able to steal a nice win against Kansas State last weekend at home, it will be a whole different ball game with Tennessee coming to town. Still, if they can slow Tennessee down with their zone defense, they may have a chance to keep it close.

On the offensive side, they are led by guards TJ Starks, Savion Flagg, and Wendell Mitchell. Starks leads the trio with 13.3 points and 3.6 assists per game, but he is only shooting 34.7% from the field. For Flagg, he averages 12.3 points and 8 rebounds per game while shooting a much more respectable 47.4% from the field. The last of the double-digit scorers is Wendell Mitchell, who is averaging 11.3 points, 4.1 rebounds and 1.7 steals per game.

Aside from this trio, there is another trio of players who help contribute. Josh Nebo, Jay Jay Chandler, and Christian Mekowulu all contribute just a tick over 8 points per game, with Nebo chipping in 5.8 rebounds and Mekowulu adding 5.3 boards per game.

11.5 points is a pretty big is a pretty big spread to spot the home team Aggies, but I just don’t see how Texas A&M can keep up with the Volunteers in this one. Tennessee presents a far superior offense and defense than the Aggies and has star power like the Aggies could only dream of. There is a reason that Tennessee is the top-ranked team in the nation and I think they are going to flex their muscles in this one. For my money, I am taking the Volunteers even though they are laying 11.5 points.