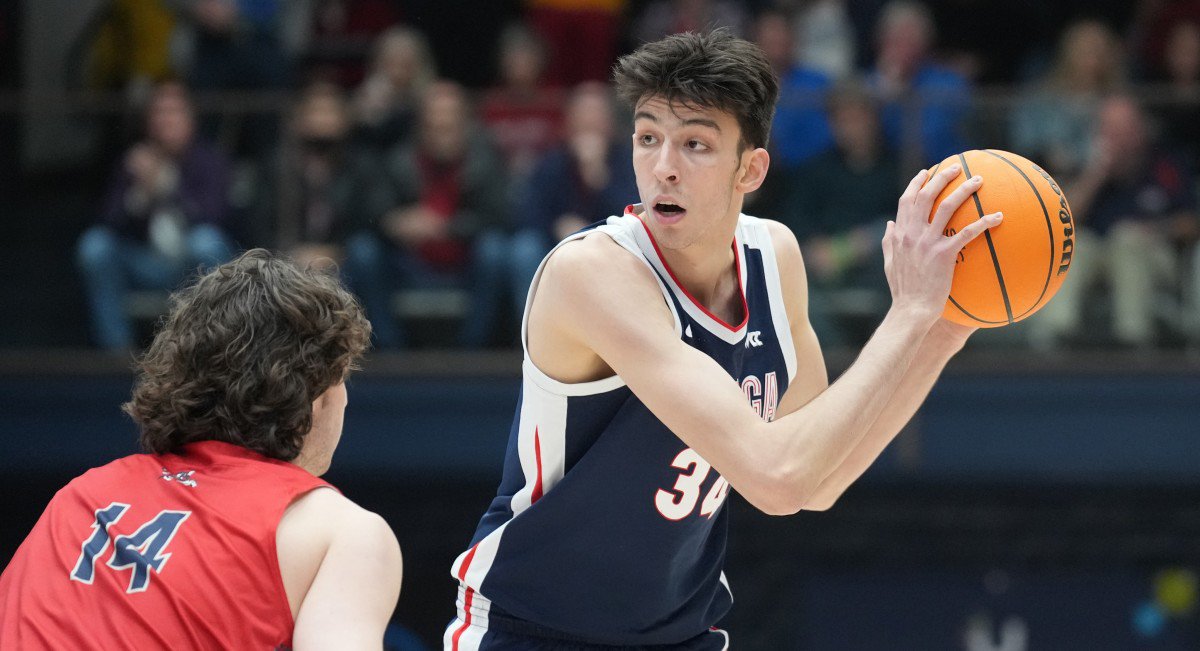 Well, here we are again, much to the surprise of no one. For the tenth time in the last 14 seasons, fierce rivals Saint Mary’s and Gonzaga will meet in the championship game of the WCC men’s basketball tournament.

Last season, Gonzaga defeated BYU in the title game as they readied for their run to the Final Four. But normal service has resumed this season, albeit with a little suspense along the way.

In the first of last night’s semifinals, Gonzaga was coasting to a rout of San Francisco, leading by 24 with 8:46 remaining. But the determined Dons didn’t give up and pulled within eight with a minute and a half remaining. But the nation’s top-ranked team didn’t allow USF to score another point in closing out an 81-71 win.

The second semifinal between Santa Clara and Saint Mary’s featured another big second-half comeback, along with some last-second drama. The second-seeded Gaels led 65-51 with 9:22 left, but the battling Broncos came all the way back to make it a one-point game in the final minute.

After a Jalen Williams block, Santa Clara had a chance to take the lead in the waning moments. But Williams was on the wrong end of a block this time, and Saint Mary’s held on for a 75-72 win.

So, we are where we thought we would be, but San Francisco and Santa Clara certainly made things interesting.

Last time these two teams met, Saint Mary’s stunned Gonzaga to close out a wild, upset-filled Saturday. That day, all of the top six teams in the AP college basketball rankings–and seven of the top ten–went down.

Will the Gaels be able to pull off another upset to claim the program’s fifth WCC Tournament title? Or will the Bulldogs continue their conference domination with yet another sweep of the regular season and tournament titles?

Last season, Gonzaga made a perfect run through the regular season, WCC Tournament, and the first five games of the NCAA Tournament before running into the Baylor buzzsaw in the championship game.

This season, the Bulldogs have been less perfect. They have three losses to their ledger already. But they have also dominated the majority of their opponents.

This is a team that does just about everything at an elite level, even defend when it is necessary.

In the NCAA Tournament, their defense will need to take the spotlight more than it has needed to against most teams they have faced.

But defense is going to garner only so much attention when you lead the nation in scoring. Last night's 81-point performance was well below their season clip, but they still average a robust 88 points per game.

There are not many teams that can keep Gonzaga from being their ruthless best, in the WCC or nationwide. But they will face one of them tonight in Saint Mary's.

Only five times this season have the Bulldogs failed to hit the 80-point mark. Two were in their regular season meetings with the Gaels, a 74-58 win in Spokane and their 67-57 loss in the recent rematch in Moraga.

In the first meeting, Saint Mary’s kept it from being a track meet, but they didn’t exactly slow down Gonzaga. The Bulldogs shot 54.5 percent (30 of 55) from the field and made 6 of 12 from three.

But they did limit Gonzaga to only one point over a six-minute stretch in the latter half of the second half. In that stretch, in which Gonzaga went 0 of 4 from the field with three turnovers, the Gaels trimmed a 15-point deficit to an eight-point margin.

The rematch, however, was a completely different story.

All-American and Wooden Award candidates Drew Timme (2 of 10, six points) and Chet Holmgren (3 of 7, six points) were shut down in Moraga, combining for only 12 points on 5 of 17 shooting. Over the past two seasons, Timme has scored in double figures in 56 of 60 games. In the first matchup with Saint Mary’s, he had 25 points on 11 of 16 shooting.

If Gonzaga can make up for that performance and win its 19th WCC Tournament title in the last 24 seasons, they will be certain to be a #1 seed come Selection Sunday. They have likely already locked one down, based on their resume and metrics. But this will put it beyond doubt regardless of what happens elsewhere later this week.

There is also a strong possibility that a win will lock up the top overall seed in the Big Dance for a second straight season. Entering today, Gonzaga tops the NET rankings ahead of Arizona, with Baylor third and Kentucky fourth.

If the Zags win tonight, it’s hard to see either of those teams (or Kansas or Auburn) bumping them out of the top overall seed no matter what happens in the Big 12, Pac-12, or SEC tournaments.

After failing to score 60 points for the first time in almost three years–since a 60-47 loss to Saint Mary’s in the 2019 WCC Tournament championship game–Gonzaga will be determined to not repeat that miserable night in Moraga.

Longtime Saint Mary’s coach Randy Bennett is as familiar with Mark Few and Gonzaga as anyone out there, and it is no secret that the Gaels will try to slow things down. While the Gaels can score and spread the wealth well–they have four double-digit scorers–there is a reason that they average only 69.8 points per game. Defense leads the way, and being efficient, not prolific, offensively is the aim.

The Gaels got into a game that they did not want last night against Santa Clara, who hit the 70-point mark against Saint Mary’s for the second time this season. The first time, the Broncos scored a 77-72 upset at home. The second time, they were a blocked shot away from a potential win.

They aren’t going to beat Gonzaga if they have to score in the mid-to-upper 70s. But can they keep the Bulldogs under 75 points for the third time this season? That might be asking a little too much, especially with the nation’s top-ranked team no doubt eager to make a statement and enter the NCAA Tournament on the best note possible.

Even the best teams have off-nights, and Gonzaga certainly had one in their loss at Saint Mary’s. Tonight, however, will be a different story.