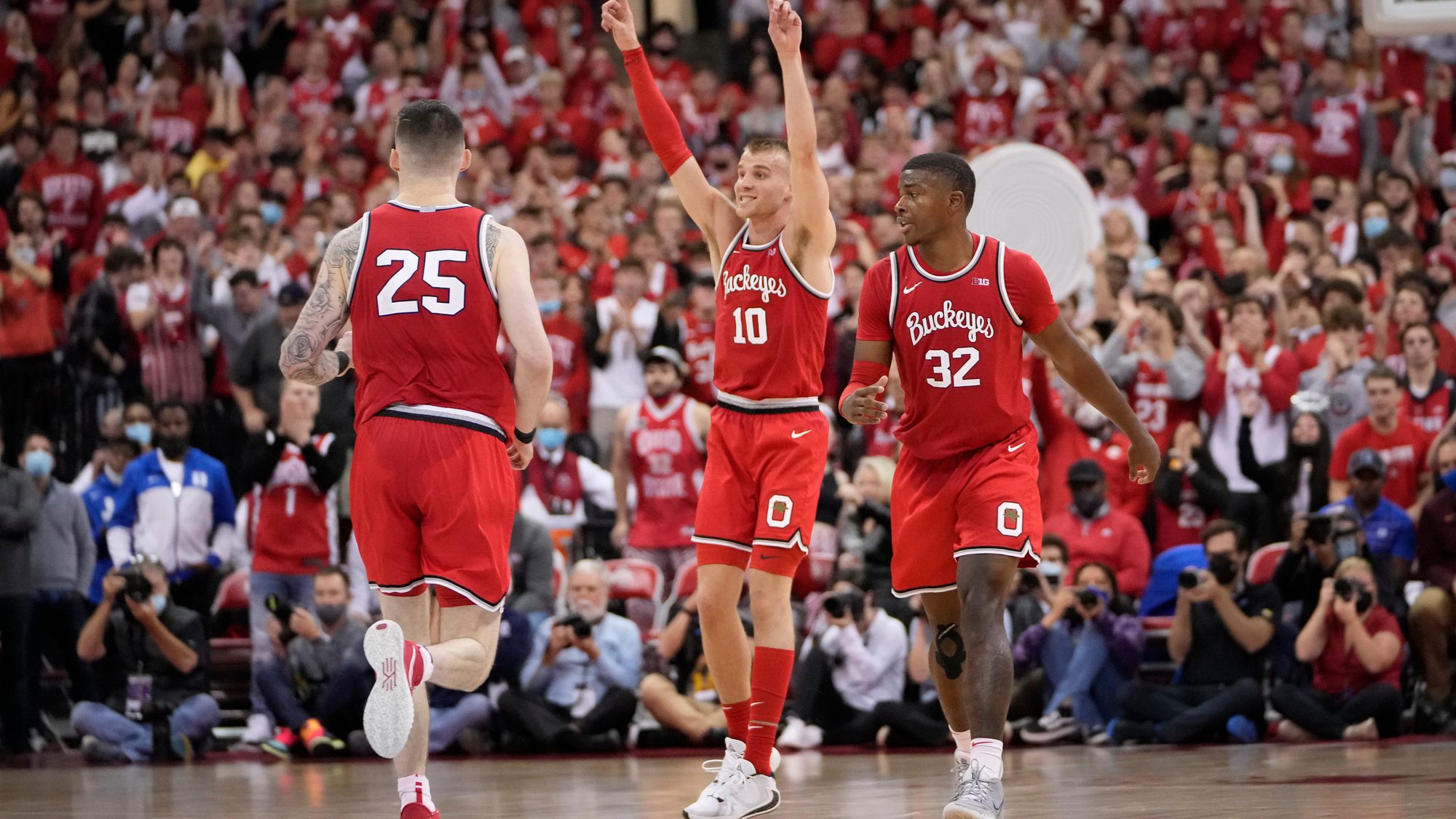 Early in Big Ten play, Ohio State is one of three unbeaten teams, along with Michigan State and Illinois. To maintain that unblemished mark, the Buckeyes will have to go into Bloomington and overcome Trayce Jackson-Davis and the Indiana Hoosiers in the standout matchup on Thursday’s college basketball schedule.

After being sidelined for three weeks, the Buckeyes returned to action on Sunday at Nebraska. It took overtime, but they saw off the Huskers to move to 3-0 in the Big Ten.

The Hoosiers, meanwhile, were off for a week and a half prior to Sunday’s visit to Penn State. It was not to be a positive start to the new year for Indiana though. With chances to lead or tie, they came up empty on their last two possessions in a three-point loss.

Though Ohio State is the ranked team, the Hoosiers are favored at home in this matchup. Will they enhance their March Madness resume with a win over the Buckeyes? Or will the Buckeyes bag the W in Bloomington to remain perfect in Big Ten play?

Supporting Cast Steps Up as Liddell Struggles in Lincoln

With Wooden Award candidate E.J. Liddell struggling through his worst shooting performance of the season and forward Kyle Young (non-COVID illness) out, the Buckeyes needed others to step up to save them against Nebraska.

And that is what happened, with freshman guard Malaki Branham and senior guard Jamari Wheeler taking over to deliver the win. Branham entered the game averaging 6.3 points per game and had highs of 11 points and 27 minutes, but he lit up the Huskers for 35 points (13 of 19 FG, 6-10 from three) in 43 minutes.

Wheeler, meanwhile, produced a season-high 16 points on 6 of 8 shooting (4 of 5 from three). The Buckeyes also got a season and career-high 14 rebounds from forward Zed Key, their second-leading scorer at 10.1 points per game.

Young’s status is uncertain, but if he can go, it will be a big boost for Ohio State. He is their third-leading scorer at 10.0 points per game, and he leads the team in rebounding at 6.7 boards per game. Young was sidelined to start to the season due to a vestibular dysfunction but had his best games of the season before the team’s three-week pause.

Of course, no individual player is as important for Ohio State as Liddell, who averages 19.6 PPG, 7.3 RPG, and 2.9 APG. Against Nebraska, he was 2 of 14 with a season-low 10 points. But Liddell, who is +950 to win the Wooden Award (at FanDuel Sportsbook), did play a role in other ways with eight rebounds and five assists.

Liddell has shot 50+ percent in eight of the Buckeyes’ 11 games, so expect a better night against Indiana.

On the defensive end, there isn’t much for first-year Indiana head coach Mike Woodson to complain about at the moment. The Hoosiers are allowing only 61.6 points per game and have given up 55, 64, and 61 in their three conference games to date.

If you are that stingy, you should come out with more than one win. Alas, the Hoosiers fell to both Wisconsin and Penn State. And they will be in serious trouble against Ohio State if they can’t find more success on the offensive end. After scoring 68 points in their conference opener against Nebraska, they managed only 59 against Wisconsin and 58 against Penn State.

Against an Ohio State team that is eighth in the country in offensive efficiency, the Hoosiers will need to match top-notch defensive effort with sharper shooting. Trayce Jackson-Davis (19.3 PPG, 8.2 RPG, 59.9% FG) is going to get his because he always does. But the likes of Race Thompson (10.8 PPG) and Xavier Johnson (10.0 PPG) need to be aggressive and accurate.

Johnson, a Pitt transfer, has yet to find his shot in Big Ten play, making only 8 of 30 shots. Against Penn State, he was only 3 of 9 from the field with eight points. Thompson was 4 of 7 from the field, and even though the offense goes through Jackson-Davis, it would be ideal for a guy that shoots almost 60 percent to be closer to double digits in attempts.

It’s a low bar, but Indiana will fare better offensively than they did at Penn State. But it won’t be enough to keep the Buckeyes from leaving Bloomington with a win.

With the Hoosiers currently struggling to score against decent opposition, it’s tough to have faith that even a raucous home crowd can help them get over the line.

Indiana’s best shot at the win is to keep Ohio State in the low to mid 60s. That will be a tough ask, however. With or without Young, the Buckeyes has too much scoring depth, and the Hoosiers can’t stop or match that.

Jackson-Davis will have a big game, but he can’t do it all on his own. Ohio State has their own big name, and he is a big-game performer as well. Liddell has put up numbers in all of the Buckeyes’ toughest games this season, and he will bounce back from Sunday’s subpar showing to help lead the visitors to the win.

It has been a miserable month for the Seattle Mariners, and things are unlikely to get any better tonight as they welcome AL Cy Young Award favorite Justin Verlander and the Houston Astros to T-Mobile Park. After just missing out on the MLB playoffs last season, the Mariners entered this season with hopes of finally END_OF_DOCUMENT_TOKEN_TO_BE_REPLACED