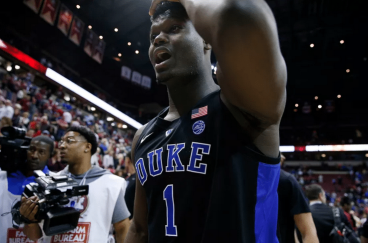 Wednesday features one of the most storied rivalries in all of college sports and an ACC matchup of top-10 teams when the No. 8 North Carolina Tar Heels (20-5, 10-2 in the ACC) travel to Cameron Indoor Stadium to take on the No. 1 Duke Blue Devils (23-2, 11-1 in the ACC).

This game not only has major implications for overall tournament seeding, but it also could have huge ACC ramifications as UNC is still in the hunt to try to overtake Duke in the conference. North Carolina comes into this game having won 8 of their last 9 games, including a 95-57 win over Wake Forest on Saturday. Their lone loss in that stretch was to No. 3 Virginia, 69-61, at home. For Duke, they have won 9 games in a row since losing to Syracuse, 95-91, at home in the middle of January. In their last game, they won 94-78 over North Carolina State. The two teams will matchup Wednesday with tipoff scheduled for 9:00 pm ET.

In this contest, the Duke Blue Devils come in as 9-point favorites playing at home. The over/under for this game is set at 166 points.

Offensively, this matchup features two of the most prolific teams in all of college sports. Duke ranks 4th in the nation, averaging 86.4 points per game, while North Carolina ranks 2nd, averaging 87.5 points per game. Both teams are relatively efficient from the field as well. Duke ranks 18th overall, shooting 48.6% from the field while North Carolina is shooting 47.5% (good for 41st). Both teams also crash the boards well, as North Carolina is averaging 12.80 offensive rebounds per game (26th overall) while Duke averages 14 offensive rebounds (5th overall).

Defensively, the Blue Devils come in as the better of the two teams. Duke is allowing opponents only 66.1 points per game, good for 52nd in the nation. Duke is especially tough in the interior as they rank 1st overall in blocked shots, averaging 7.2 per game (almost 1.5 blocks more than second place). They are also allowing opposing offenses to shoot just 39.2% from the field, good for 12th in the nation. North Carolina, on the other hand, comes in tied for 228th in the nation in scoring defense, allowing 73.2 points per game.

North Carolina Looking For Huge Win On The Road

When truly playing on the road, as opposed to a neutral site, North Carolina has actually been pretty solid this year. They are 8-1 overall on the road but will have to play to a whole new level to take down the No. 1 Duke Blue Devils.

This may be one of the most exciting freshmen classes that coach Mike Krzyzewski has ever had. Led by freshman Zion Williamson, a good bet to be the number one overall pick in the NBA draft, the Blue Devils are flying high, both literally and figuratively.

Speaking of Williamson, he is averaging 22.4 points on a ridiculous 68.3% shooting. He is also averaging 9.2 rebounds, 2.3 assists, 2.3 steals and 1.9 blocks per game. Amazingly, he is not even the leading scorer on the team. That honor goes to forward RJ Barrett, who is averaging 22.7 points, 7.4 rebounds, and 4 assists.

Duke Wins, But Do They Cover?

Love them or hate them, there isn’t a whole lot better than a North Carolina – Duke rivalry when it comes to college basketball and this year’s version is sure to live up to the billing. The energy and athleticism that Duke plays with is something to truly marvel at, and with that, I think they can win this game. Still, I have a hard time spotting North Carolina 9 points from a betting line perspective. While they may not be on Duke’s level, they are still spectacular, especially on the offensive side. I like Duke to win in this one, but for my money, I will take North Carolina at +9.