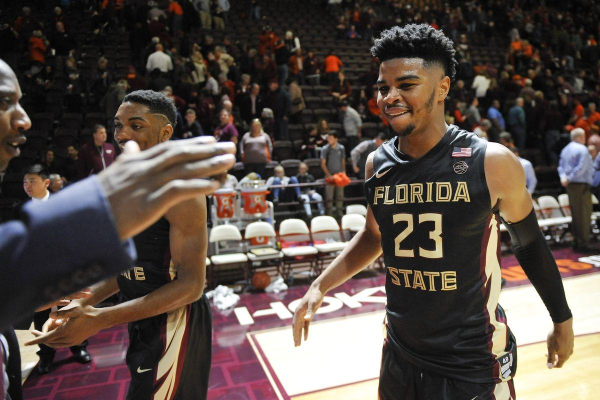 The 4-seeded Florida State Seminoles have traveled all the way to Anaheim, California to take on the 1-seeded Gonzaga Bulldogs in one of two Sweet Sixteen matchups in the West Region. Both teams are coming in off of solid and secure wins after losing in their conference tournaments. The Zags were a clear 1-seed and potential top overall team before losing to St. Mary’s in the WCCChampionship while Florida State actually managed a great win over Virginia before losing to eventual top seeded Duke. Florida State looked more impressive in their conference tournament, but they followed that up with a close game with Vermont, which has been the epitome of the Seminoles season. Gonzaga has won their first 2 games rather convincingly.

The Seminoles started ACC play 1-4 with losses to great teams in Duke and Virginia but also rough losses to Boston College and Pitt. Since then the Seminoles only two losses came at North Carolina and in the ACC Championship game to the Blue Devils, which is a really nice way to end the season. This team is really talented and I think it took them a while to mesh and find their identity.

One of these identity problems is that FloridaState’s clear leading scorer doesn’t even start. Mfiondu Kabengele has been great all season and he has continued that and then some in the tournament. Kabengale has put up 20+ points in their first 2 games in the tournament and he will need to continue this if the Seminoles want to move on.

The other player to watch for this team is Terrence Mann. He is the only other Florida State player to average double-digits this season and he has put up 18 and 19 in his first two NCAA Tournament games. I think Mann’s ability to get to the rim at ease will be challenged in this spot and he needs to find ways to attack the Bulldog’s bigs and put the ball in the hoop.

Defensively, FloridaState wants to play players that are 6’4, 6’5, 6’7, 6’8, 6’10, and 7’4 for more than 20 minutes if they can and this will be a challenge for the Bulldogs. This lack of a lot of great teams on the schedule means they have not seen length and size like this many times this season and I think this will be the challenge. This team shoots the lights out of the ball all over the floor and I am incredibly skeptical that they can do this against a team this long.

Gonzaga has been a top team in the country all season and a lot of this has to do with their nation-leading offensive efficiency. Not only do they lead the country, but they lead it convincingly. The Seminoles are not a great matchup for this team because they are a top 25 defensive team in a much more difficult conference. With Gonzaga’s talent, I have no doubts that they would be an incredible offensive team regardless of opponent, but I do think their lack of a difficult conference schedule is only going to boost their numbers.

There is no doubt in my mind that Gonzaga is the more talented basketball team in this spot, but I think the line is too big. This line and game seem to be projected as if these teams both will play around their normal performances, which is understandable, but I think it’s wrong. I think we see Gonzaga struggle more from the field than they are used to. Now again, this is the most efficient team in the country. I think this keeps the Seminoles in this game enough to cover this 8-point spread. I like the Seminoles +8 here.