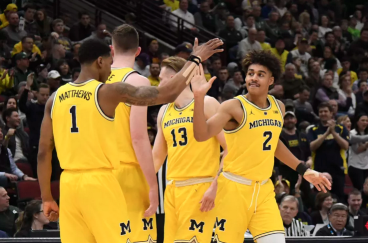 Here’s a brief recap on how each team made it to this round before we get to an in-depth look at each team and this matchup. Right now, Michigan is the early favorite at -6.5.

Florida won their tournament opener for the third straight year, beating No. 7 Nevada 70-61. Florida found themselves up by 18 at one point, before Nevada stormed back to cut the lead all the way down to two. However, the Gators scored the last seven points of the game to send the Wolf Pack home. Kevarrius Hayes scored 16 points, and Jalen Hudson added 15 points in the win.

Michigan never slowed down after their fast start, leading by double digits for nearly the entire game and beating No. 15 Montana 74-55. Charles Matthews had 22 points and 10 rebounds, Ignas Brazdeikis added 14 points and seven rebounds, and Jon Teske had 11 points and nine boards for the Wolverines, who led by as many as 27 points in the second half. It’s Michigan’s third straight year making it to the round of 32.

Sizing up the Gators

According to KenPom’s efficiency rankings, Florida is the highest-rated double-digit seed across the entire tournament. Their mediocre 20-15 record is a result of playing in 16 “Quadrant 1” games this season, winning four of them. This shows that the Gators have played many tough opponents and should not be overwhelmed against a great Michigan team.

Florida is not a strong offensive team, shooting less than 50% on two-pointers and only 33.5% on threes. But their strength is defense, where they held opponents to 32% from beyond the arc and have a defensive turnover percentage of 22.6, one of the best in the country. The Gators will rely on a slow, defensive style of play to win this game.

Senior guard KeVaughn Allen is the team’s leading scorer with 11.9 points per game. He is the only player who averages double-figures in scoring for the Gators. Guard Jalen Hudson (9.2 PPG) and forward Keyontae Johnson (8.1 PPG) are other players who can get to the basket. Center Kevarrius Hayes (8.3 PPG, 6.2 REB, 1.9 BLK) provides a good defensive presence down low.

Sizing up the Wolverines

Michigan comes in with a NET ranking of 9th. If you remove their three losses that came against rival Michigan State, the Wolverines are very likely a 1-seed in the tournament. But they certainly played like a 1-seed on Thursday, dominating Montana from tip-off until the final buzzer.

Just like Florida, Michigan is a team that wins with defense. Coach John Beilein’s group allowed just 58.3 points per game this season, second in the nation. But unlike the Gators, the Wolverines can score, averaging just under 71 points per game. They move the ball around well, and even though they’re not a tremendous three-point shooting team (35%), they can hit enough shots to win.

Freshman forward Ignas Brazdeikis leads Michigan with 15 points per game. They also get scoring from Jordan Poole (12.7 PPG) and Charles Matthews (12.3 PPG), who looks healthy after injuring his ankle in late February against Michigan State. Center Jon Teske (9.7 PPG, 7.0 REB, 2.1 BLK) will provide a tough test for Hayes in the paint.

With both teams having defense as a strength, this could be a low-scoring, grind-it-out affair. But the difference is Michigan’s offense, which ranks 18th in offensive efficiency along with their 2nd-ranked defense. Meanwhile, the Gators are just 61st in offensive efficiency, and will likely not score enough points to pull off the upset.