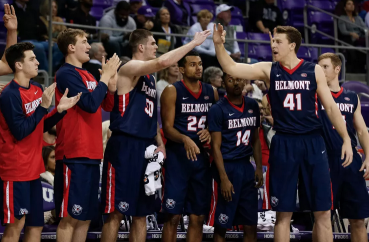 The regular season is done, selection Sunday has come and gone, and all that is left now is to play the games. While the focus is on the tournament of 64, there are a handful of play-in games that must come first. One play-in game that should be a good one features the Temple Owls (23-9) versus the Belmont Bruins (26-5).

These two teams are playing for the 11-seed and a date with Maryland on the line. This is actually the first time these two have faced one another, so there isn’t much to look at in terms of history. With that in mind, both of these two teams have had nice seasons. Belmont finished 16-2, tied for first in the OVC with Murray State. For Temple, they finished 13-5 in the AAC behind Houston and Cincinnati. The two will matchup on Tuesday with tipoff scheduled for 9:10 pm ET from the UD Arena in Dayton, Ohio.

In the matchup, the Belmont Bruins come in as 3-point favorites playing at the neutral site. The over/under for this game is set at 155.5 points.

Offensively, Belmont has been one of the best teams in the country. In fact, they rank 2nd in the nation behind only Gonzaga and are averaging 87.4 points per game. They are especially good at distributing the ball as they rank tops in the nation in assists at 19.9 per game and can be lights out from behind the arc as they average 10.5 threes per game (12th overall). For Temple, they come in at 115th in the nation, averaging 74.9 points per game.

Temple Trying To Show They Belong

The headlines in the AAC this season have been dominated by Houston and Cincinnati, but quietly, Temple has put together a really nice season. In fact, Temple has beaten top-25 ranked teams Houston and UCF this season to boost their resume for the tournament. Now trying to show the nation that they are for real, they have to go against a tough Belmont team.
Leading the way for the Temple Owls this season is guard Shizz Alston Jr. On the season, Alston is averaging 19.7 points on 40.7% shooting, including 35.3% from behind the arc and 90.7% from the free throw line. He is also averaging 2.8 rebounds, 5 assists and 1.5 steals per game.

One of the big knocks on Belmont is that they play a relatively weak schedule compared to most of the other teams that are in the tournament. Still, to average 87.4 points per game, your offense still has to be solid. Leading the Bruins is senior guard Dylan Windler. On the season, Windler is averaging a double-double with 21.4 points and 10.7 rebounds per game. He is also chipping in 2.6 assists, and 1.4 steals while shooting 54.8% from the field and 43% from behind the arc.

Belmont’s Offense Too Much

It is tough to evaluate teams that don’t come from power conferences. The Ohio Valley Conference is far from a dominant conference, but even though Belmont lost to Murray State in the conference tournament championship, they still have shown they have the ability to lay it to others on the offensive side. For Temple, they are good but not great on both sides of the ball. For me, this is what is going to hurt them in the long run. I don’t know if they have the offense to keep up with the Bruins yet they don’t have the defense to stop them. I do think there will be a feeling out process in the first half so this game might remain close through the first 20, but ultimately, I think Belmont pulls away. For my money, I am taking the Bruins despite laying 3 points.