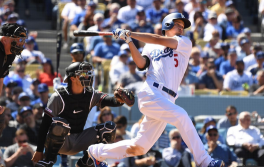 The Gonzaga Bulldogs and Texas Tech Red Raiders are set to meet up with a trip to the Final Four on the line. Gonzaga is the number 1 seed in the West Region, and Texas Tech is the number three seed. Both these teams were regular season league champions, and they have both had terrific seasons. The Bulldogs and Red Raiders have had little trouble so far in their NCAA Tournament games, but this will be a tough test for each team.

Gonzaga comes into this game with a record of 33-3, and have had little trouble in their first three wins in the NCAA Tournament. The Bulldogs were able to hold off a great Florida State squad in the Sweet 16, coming away with a 72-58 win. Texas Tech has been winning games by an average of 19 points per game, and this is their second straight appearance in the Elite Eight. The Gonzaga Bulldogs are a -4.0 point favorite over the Texas Tech Red Raiders in this game.

Texas Tech has been getting the job done with their defense all season long, but they have stepped it up a notch in the NCAA Tournament. The Red Raiders haven’t allowed more than 58 points in their three wins and held a terrific Michigan squad to just 44 points in the Sweet 16. Texas Tech is the best defensive team in the country in terms of opponent’s field goal percentage, but this will be a tough test.

Even though Texas Tech has been winning games with their defense, they do have a terrific player on the offensive end of the floor. Guard Jarrett Culver leads the team with 18.5 points, 6.3 rebounds, and 3.7 assists per game this season, and will likely be in the NBA next season. Matt Mooney and Davide Moretti give the Red Raiders shooting on the perimeter and are both shooting over 39 percent from deep. Even though Texas Tech can shut down their opponents, they will have to find some offense in this game.

Gonzaga Has Plenty of Weapons

The Gonzaga Bulldogs are led by All-American candidate Rui Hachimura, but they have a ton of weapons that can all score the ball. Gonzaga comes into this game averaging more than 88 points per game this season, and are shooting better than 36 percent from the three-point line. The Bulldogs aren’t afraid to pick up the pace and score in transition, but they also run terrific half-court offense. While Gonzaga isn’t even close to as good of a defensive team of Texas Tech, they still only give up 64 points per game. This is a very deep and very complete Gonzaga team.

Hachimura leads the Bulldogs with 19.6 points per game, but he hasn’t been the star in the NCAA Tournament. Forward Brandon Clarke has been terrific for the Bulldogs and is averaging 16.9 points and 8.4 rebounds per game on the season. Zach Norvell Jr. is shooting 38 percent from the three-point line this season and has made a ton of huge shots throughout his Gonzaga career. Texas Tech will be the best defense they have faced all season, but Gonzaga will be ready for it.

Bulldogs Back in the Final Four

This has all the makings of an absolute classic in the Elite Eight with so much on the line for each team. Texas Tech has been dominating teams with their defense all season long, but that’s easier said than done against Gonzaga. The Red Raiders are eventually going to have to score points, and that hasn’t always been easy for them. Look for the Gonzaga Bulldogs to solve the Texas Tech defense and pull away for a win. Bet the Gonzaga Bulldogs -4.0 over Texas Tech to reach the Final Four.