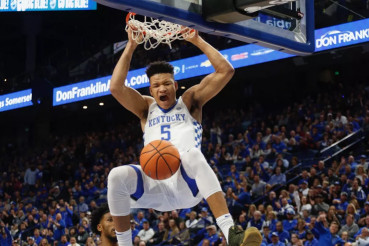 The Midwest Region Final will have a Southeastern Conference feel as a pair of conference teams will meet up for the right to go to the Final Four. Fifth-seeded Auburn pulled off their second straight upset win to get to the Elite Eight. Kentucky was able to hold off an upset bid from the Houston Cougars to set up this showdown with their conference rival. The Wildcats beat the Tigers in both of their matchups during the regular season.

Auburn barely survived their first-round win over New Mexico State, but they have been rolling ever since. The Tigers blasted Kansas in the second round and then blew out top-seeded North Carolina in the regional semifinals. This is a veteran Auburn squad that is playing with a ton of confidence of late. Kentucky has had to sweat it out in their last two NCAA Tournament games, but have beaten Wofford and Houston by a combined 10 points. This is another extremely young Kentucky team, but they do have some veterans inside the pain. Kentucky is a -3.0 point favorite over Auburn in this game.

Most young teams don’t play very good defense on that end of the floor, but that hasn’t been the case with Kentucky this season. Coach John Calipari has gotten his young men to buy in, and the Wildcats are holding opponents to just 64.4 points per game this season. Kentucky starts a trio of freshman guards, and they have been carrying the load for the Wildcats in this tournament. Tyler Herro is averaging 14.2 points per game this season and continues to make clutch shots throughout the tournament. Point guard Ashton Hagans is the table setter, averaging 4.5 assists per game.

Kentucky also got a huge boost in the Sweet 16 when PJ Washington returned to the floor after missing a pair of games with a foot injury. Washington leads Kentucky with 14.8 points per game this season and gives the Wildcats a stud on both ends of the floor. Graduate transfer Reid Travis has waited his entire career for a moment in the NCAA Tournament and could return home to Minneapolis in the Final Four. Travis is averaging 11.3 points and 7.2 rebounds per game.

The Auburn Tigers have made it this far in the tournament for one reason; they have been making an insane amount of three-point shots. Auburn is shooting 38 percent from deep as a team this season, but they have stepped it up in the NCAA Tournament. Guards Bryce Brown and Jared Harper have made a combined 228 three-point shots this season, and have been putting on a shooting clinic. Auburn will try to play fast and score points before Kentucky is set on defense.

Auburn did suffer a huge blow in their Sweet 16 victory over North Carolina when Chuma Okeke went down with a serious knee injury. Okeke is doubtful for this matchup with Kentucky, and Auburn will miss his 12.0 points and 7 rebounds per game. There is no doubt that Auburn will miss his presence on both ends of the floor. The Tigers are averaging 88 points per game in the NCAA Tournament, but this is a big blow.

Even though Auburn has been an unstoppable force on offense in the NCAA Tournament, that recipe for success won’t work against Kentucky. The Wildcats will turn this into a grind it out type of game, and that doesn’t fit Auburn well. The Tigers have had a great run of late, but their road will stop in this game. Bet the Kentucky Wildcats -3.0 over the Auburn Tigers.

Tonight’s NBA betting schedule is lacking in overly compelling matchups, but tonight’s action will also be taking place with a few notable names missing. Booker, Morant, and Lillard Sidelined Tonight and Beyond Booker Out Versus Pistons Due to Hamstring Injury The Phoenix Suns lost Devin Booker (hamstring) on Tuesday against Golden State but closed out END_OF_DOCUMENT_TOKEN_TO_BE_REPLACED