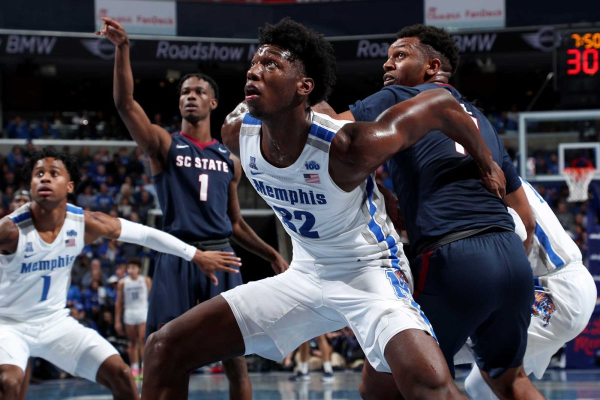 Tuesday night features a matchup of Top-25 teams as the No. 13 Memphis Tigers (2-0) travel to Moda Center at the Rose Quarter in Portland to take on the No. 14 Oregon Ducks (2-0). While this is technically considered a neutral site, it should heavily favor the Oregon Ducks as this is being held just a couple of hours away from Eugene. As part of the Phil Knight Invitational, both of these teams will look to make early statements and get a signature win. Tipoff for this one is scheduled for 9 pm ET.

The Memphis Tigers are trying to turn attention back onto the court after the hoopla that has surrounded James Wiseman and his ineligibility ruling by the NCAA. After a judge issued an injunction, Memphis decided to have Wiseman suit up for their first two games, and he should be on the court again Tuesday. Wiseman, a 7-foot freshman center, is expected to be one of the top picks (if not the top) in next year’s NBA Draft; thus, his availability to play is big not only for his own stock but for the success of the team as well. Through its first two games, Memphis is 2-0 after a 97-64 win over South Carolina State and a 92-46 win over Illinois-Chicago.

Oregon has also gotten off to a nice start, with a 71-57 win over Fresno State followed by a 106-75 win over Boise State. The Ducks will be looking to keep it rolling on Tuesday against a tough Memphis team.

The Oregon Ducks come in as three-point favorites playing at the neutral site. The over/under for total points scored is set at 146.5.

Keep in mind that this early in the season, it is hard to read too much into stats as there isn’t enough data. Still, thus far on the offensive side, Memphis ranks 10th in the nation in scoring, averaging 94.5 points per game. Oregon comes in 27th, averaging 88.5 points per game.

On the defensive end, it is once again Memphis that comes out ahead as it is currently allowing just 55 points per game compared to the Ducks’ 66 points allowed per game.

Playing so close to Oregon’s home campus, it is basically a road game for Memphis. With that in mind, they are hoping that their big-time freshman can rise to new heights once again. Through two games, Wiseman has already shown why he is so enticing as a legitimate draft prospect. He is currently averaging 22.5 points and 10 rebounds per game.

As long as Memphis has him available, it will always stand a chance. Wiseman will certainly be the best player on the floor Tuesday, and that is no knock on any of Oregon’s players. He is just that good. In the Tigers’ game against UIC, Wiseman had 17 points, nine rebounds and five blocked shots.

Speaking of that Boise State game, the Ducks showed one of their true strengths is their shooting. They went 42 of 60 from the field (70 percent), and some of their players were particularly hot from the three. Anthony Mathis went 9 of 11 from the three-point line and finished with 30 points. On the season, Mathis is averaging 19.5 points per game.

Aside from those two, Chris Duarte (11.5 points, six rebounds) and Shakur Juiston (10.5 points, five assists, 4.5 rebounds per game) have had nice starts.

The Ducks are also hoping to have Francis Okoro back on the court, too. Okoro was hit by a car prior to their last game and, while he did not suffer any serious injuries, he did sit out last game. As one of their true post players, Okoro’s return could be big, especially when dealing with Wiseman.

Too Close To Call, Taking The Points

There are aspects of both of these teams that I like. The Ducks have definitely shown they can get hot from the field, and if that is the case, they may be tough for Memphis to beat. Still, Wiseman will likely be the best player on the floor Tuesday night, and that holds a lot of weight in the college ranks. He can singlehandedly take over a game, especially if Okoro has to be out again. Ultimately, you probably could make an argument either way, but with it being so close, I am going with the team getting the points. For my money, I am taking Memphis at +3.