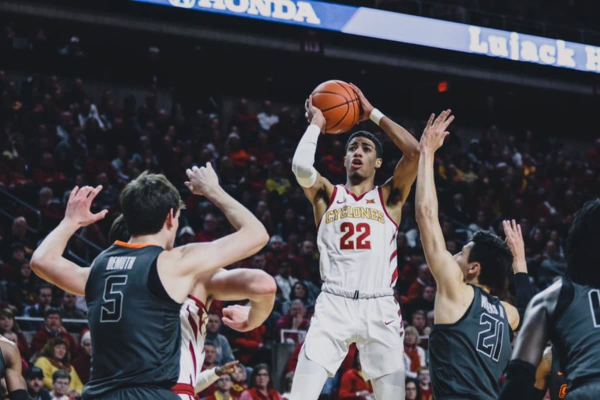 For Iowa State, they have made a knack of upsetting top-10 teams this season. They already beat Kansas earlier in the season, 77-60, in Iowa and last Wednesday beat number 8 Texas Tech 68-64 on the road. For Kansas, they are coming off of a frustrating loss Saturday to unranked West Virginia, 65-64, on the road. They will be looking to get back on track and get some revenge over their earlier loss to Iowa State, playing at home. No matter the venue, the Jayhawks are a perfect 14-0 playing as the home team this season. The Cyclones and Jayhawks will square off Monday with tipoff scheduled for 9:00 pm ET.

In this contest, the Kansas Jayhawks come in as 4.5-point favorites playing at home. The over/under for total points scored is set at 145.5.

On the defensive side, Iowa State comes into this game as the stronger team, ranking 34th in the nation in scoring defense, allowing just 64.5 points per game. Kansas, on the other hand, ranks 147th in scoring defense (allowing 70.1 per game). Both teams rank in the top-50 in terms of opponents field goal percentage, with Kansas allowing opponents to shoot 40% (34th in the NCAA) and Iowa State allowing opponents to shoot 40.4% (49th in nation). Kansas is especially strong on the defensive boards, ranking 30th in the nation averaging 28.18 rebounds per game.

Iowa State Looking For Another Upset

Iowa State has put together a really nice season thus far and has been turning heads with their big wins over ranked opponents. Senior guard Marial Shayok has been exceptional this season. He is averaging 19.4 points, 5.2 rebounds, and 1.9 assists. He is also shooting 50.8% from the field, 85.1% from the free throw line and 39.8% from behind the arc.

Aside from Shayok, the Cyclones have three others averaging double-digit scoring. Michael Jacobsen (13.1 points, 6.1 rebounds, 58.9% shooting), Lindell Wigginton (11.9 points, 4.4 rebounds, 2.8 assists) and Talen Horton-Tucker (11.7 points, 5.4 rebounds, 2.8 assists, 1.4 steals) have all contributed as well, although Wiggington has only played in 8 games this season.

Kansas Looking For Big Game Out Of Dynamic Scorers

The two others averaging double-digits include Udoka Azubuike (13.4 points, 6.8 rebounds, 1.6 blocks) and Devon Dotson (10.9 points, 3.4 rebounds, 3.1 assists, 1.4 steals). Unfortunately for Kansas, though, they have lost Azubuike to a hand injury for the season which leads a big void in the middle where the 7-footer had been dominating.

Iowa State has proven that they can be pesky, and their 77-60 win over Kansas earlier in the season can’t go unnoticed, but I still like Kansas in this one. In their last matchup, Dedric Lawson was held to a very modest 13 point, and LaGerald Vick was held to just 6 for Kansas while Marial Shayok exploded for 24 points. I expect Kansas to play much better on both ends of the floor and think they will pull away in this one late. It might be close through ¾ of the game, but ultimately I like Kansas despite laying the 4.5 in this one.