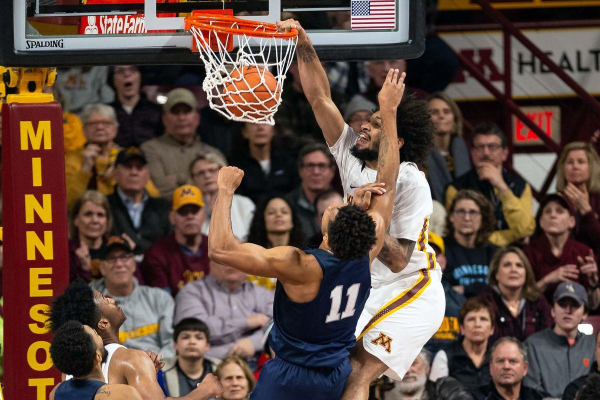 After just two games on the docket Wednesday, the Big Ten Conference Tournament gets in full swing on Thursday and one of the more interesting matchups pits the Penn State Nittany Lions (14-17) against the Minnesota Golden Gophers (19-12).  The gets Purdue on Friday, but first thing is first, these two are going to battle on Thursday.  Despite their records, this is a case of hot (Penn State has won 5 of its last 6 games) versus cold (Minnesota has lost 7 of its last 10 games).  For that reason, Penn State is actually favored in this game. The two did meet up earlier in the year, back on January 19, with Minnesota winning 65-64.  That matchup was played at Minnesota but Thursday they will face off at a neutral site, the United Center in Chicago, with tipoff scheduled for 7:00 pm ET

As previously mentioned, Penn State actually comes in as 2.5-point favorites in this one.  The over/under for this game is set at 135.5 points.

On the defensive side, Penn State comes in as the stronger of the two teams.  They currently rank 93rd in the country allowing opponents just 68.4 points per game.  They are especially good at creating takeaways.  Penn State ranks 39th in the country in steals averaging 7.7 per game.  For Minnesota, they come in just a little bit behind the Nittany Lions at 106th in the country allowing 68.7 points per game to opponents.  Minnesota does protect the interior well as they are averaging 4.2 blocks per game (tied for 71st in the nation).

Neither of these two teams are especially great on the offensive side of the ball. Minnesota comes in at tied for 219th in the country averaging 71.2 points per game.  Penn State is actually a little worse ranking 259th and averaging 69.6 points per game.  Still, in their last 5 games Minnesota has only broken the 70-point plateau once while Penn State has scored 70 or more points (their highest was 95) 7 of their last 9 games.

At 14-17, probably the only way they are seeing another tournament is if they win the Big Ten Tournament.  While that is likely wishful thinking, they have been playing just as well as anyone in the conference lately and will look to continue that on Thursday.

Leading the way for the NittanyLions this year has been forward Lamar Stevens.  On the season, Stevens is averaging 19.8 points per game on 42.5% shooting from the field.  He is also averaging 7.8 rebounds and 2 assists per game.

Minnesota Needs To Turn It Around Fast

While the Golden Gophers have had a better season record-wise than Penn State, they are also no sure thing for a tournament bid. In fact, they likely need to make a deep run in the Big Ten Tournament to have any chance at making the NCAA field. They know the way they have been playing is not going to get it done, but now that it is win or go home, it will be interesting to see what Minnesota team shows up.  Will it be the team that has beaten Purdue, Iowa and Wisconsin, or will It be the team that has lost to Rutgers, Nebraska and Northwestern.

Leading the way for Minnesota is guard AmirCoffey. He is averaging 16 points per game on 43.9% shooting.  He is also chipping in 3.7 rebounds and 3.2 assists per game.  Big man Jordan Murphy (14.5 points, 11.7 rebounds) has been a force down low at times.  They will also look to DanielOturu (10.8 points, 7.2 rebounds) and Gabe Kalscheur (10.1 points) to get things going for them.

Outcome Could Go Either Way

This is one of those coin flip type games to me where the outcome could truly go either way.  That is the beauty of March Madness, especially when looking at the number 10 and 7 seeds in the Big Ten Tournament. Still, in cases like these I have to go with the hotter team and that has undoubtedly been Penn State as of recently. This one could truly go either way but for my money, I feel a little more comfortable taking Penn State despite laying the 2.5 points.