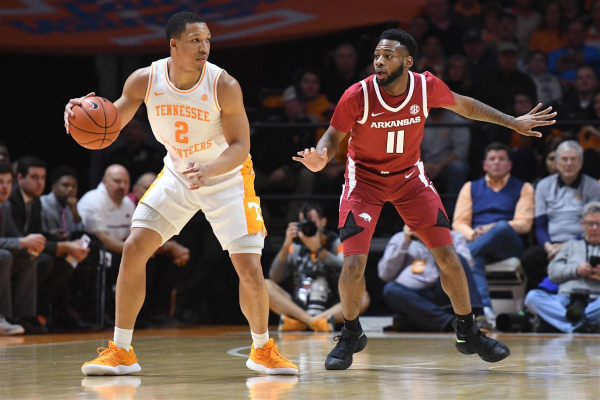 There was definitely some craziness in college basketball over the past week with 13 ranked teams losing, including over half the teams in the top-10. Let’s catch up on all of the important news you may have missed.

With so many of the top teams losing over the weekend, the Tennessee Volunteers have ascended to the top spot in the polls. The Vols were nearly the victims of an upset themselves, surviving a close call against Alabama on Saturday. This is just the second time in program history Tennessee has reached the top spot in the polls. Of course, the last time it happened in 2018, the Vols quickly lost it. Tennessee will visit in-state rival Vanderbilt on Wednesday night followed by a weekend date against West Virginia as part of the SEC-Big 12 Challenge.

The injury to Duke point guard Tre Jones doesn’t appear to be as serious as initially feared. Jones hurt his shoulder during the team’s loss to Syracuse last week. However, coach K said over the weekend that it won’t be a long-term absence. The Blue Devils have managed to beat both Virginia and Pittsburgh without Jones and they could give have him back before he misses too many more games.

Done for the Season

One player who won’t be coming back from injury this season is Florida forward Keith Stone. The junior tore his ACL during Florida’s win over Georgia on Saturday. Stone has been a complementary player for the Gators this season, but he was still averaging 19 minutes, six points, and four rebounds per game. He gave Florida some much-needed size coming off the bench, so his absence could be felt by the Gators moving forward.

Get Out of Here

Oklahoma State could be playing short-handed for the rest of the season. The school announced late last week that Michael Weather, Kentrevious Jones, and Maurice Calloo have been removed from the program because of a violation of team rules. Jones and Calloo, both freshmen, have made a minimal impact season, although Calloo played in nearly every game before his dismissal. Weather, a sophomore who began his career at Miami of Ohio, was the team’s fourth-leading scorer.

The Cowboys previously parted ways with grad transfer Mike Cunningham. Oklahoma State is now down to seven scholarship players and held a special tryout on campus in search of walk-ons to help fill out their roster. The Cowboys are currently 8-10 overall and 2-4 in conference play. They lost to Iowa State on Saturday in their first game since Weathers, Jones, and Calloo were kicked off the team.

Last week, TCU head coach Jamie Dixon announced that point guard Jaylen Fisher wouldn’t be returning to the court anytime soon because of a knee injury. This past week, Dixon announced that Fisher is leaving the program after it was determined that he wouldn’t be able to play again this season. Fisher hasn’t played since Christmas and averaged 12 points per game in the nine games he played this season. He will stay in school for the rest of the semester before seeking a transfer this summer.

On the heels of a five-game losing streak, Indiana has suspended guard Devonte Green for “not meeting the standards expected of members of the program.” Green is the team’s fourth-leading scorer with eight points per game. He is also leading the team in assists. There is no timetable for Green’s suspension, which started with Tuesday’s loss to Northwestern. The Hoosiers began the season 12-2 but are now reeling with five straight losses and a date with Michigan set for Friday. Needless to say, the last thing Indiana needs right now is another distraction or missing player.

There’s been another minor twist in the long-running saga between UConn and former coach Kevin Ollie. The university has announced it will self-impose the loss of one scholarship next season for violations that occurred under Ollie. There will also be smaller punishments the Huskies will levy against themselves, including week-long bans on recruiting visits and communication. The move was in response to a notice UConn received in September regarding violations by Ollie deemed “a severe breach of conduct.” The hope for UConn is that the NCAA won’t feel the need to impose any further punishment against them, although that remains to be seen.

Meanwhile, Ollie is still trying to force UConn to pay the salary remaining on his contract at the time he was fired, alleging that he was fired without cause and that his firing was at least partially motivated by race. That fight in the legal system continues.