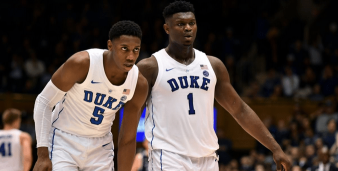 Selection Sunday is less than a week away and the college basketball season is heading toward the stretch run. Let’s check out everything you need to know about what’s happened over the past week.

After a few stagnant weeks at the top of the polls, we finally got a shakeup over the weekend. Kentucky handled Tennessee 86-69 on Saturday night. That loss dropped the Volunteers to no. 5 in the polls this week, with Kentucky moving up to no. 4. The loss by Tennessee also allowed Duke to reclaim the top spot in the polls. The Blue Devils have now won nine in a row and are starting to look unstoppable. However, the Blue Devils play rival North Carolina on Wednesday night and will then have challenging road games against Syracuse and Virginia Tech, so there are plenty of challenges ahead of them.

Kentucky followed up their weekend win over Tennessee with a road win over Missouri on Tuesday. However, late in that game, forward Reid Travis sprained his knee when teammate Keldon Johnson fell on him. The Wildcats don’t immediately know the severity of the injury, but John Calipari intimated after the game that Travis could miss some time. Kentucky has just five games left in the regular season, so any time Travis misses would be significant, especially with their rematch against Tennessee just 10 days away. Travis is averaging 11 points and nearly seven rebounds per game, making him an important piece of the puzzle for the Wildcats.

While Zion Williamson has been the talk of the college basketball world this season, fellow freshman RJ Barrett accomplished something over the weekend few Blue Devils have done. During Duke’s win over NC State on Saturday, Barrett recorded a triple-double with 23 points, 11 rebounds, and 10 assists. On top of that, he had no turnovers. Barrett is just the fourth player in Duke history to record a triple-double and just the second since Coach K took over.

Another One Bites the Dust

MichiganState has already lost Josh Langford to a season-ending injury, and now the season is in jeopardy for another star player. Junior forward Nick Ward suffered a hairline fracture in his left hand during MSU’s win over Ohio State on Sunday. There is no timeline for his return and Ward will be reevaluated every week to check his progress. The Spartans remain hopeful he’ll be able to return before the end of the season, but there are obviously no guarantees.

The 6’8’’ big man is averaging 15 points and nearly seven rebounds per game. He’s also an impact player on the defensive end. Being without both Langford and Ward will challenge Michigan State’s depth while forcing sophomore Xavier Tillman and freshman Thomas Kithier to play much larger roles.

Speaking of the Big Ten, Michigan State is currently one of three teams tied atop the league with a 12-3 record in conference play. The other teams are Michigan and Purdue, who escaped with a road win Tuesday against in-state rival Indiana. Meanwhile, both Maryland and Wisconsin are within two games of that trio, so it’s still a little too soon to count out either of those teams making a run at the regular season title.

Mississippi State announced over the weekend that Nick Weatherspoon has been suspended indefinitely because of a “violation of team rules.” Weatherspoon is the team’s fourth-leading scorer, averaging 9.6 points per game. His brother, Quinndary, is the star of the team, averaging 18.1 points per game. At the moment, the Bulldogs are a borderline top-25 team and a safe bet to earn an at-large bid to the NCAA Tournament. However, they will likely need all hands on deck if they want to make a deep run in March.

NC State is a player short these days after grad transfer Eric Lockett was arrested last week for allegedly hitting a woman. Lockett was quickly suspended from the team and there’s no indication of when he may be reinstated. After transferring from Florida International over the summer, Lockett appeared in all but two of NC State’s games prior to his arrest, averaging close to 17 minutes per game. He was only scoring five points per game for the Wolfpack, although he does hurt their overall depth.