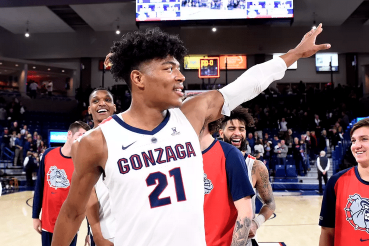 We’re nearly midway through February and the college basketball season rages on toward March. Let’s take a look at the top stories from the past week just in case you missed any.

Scandal in the Desert

The days could be numbered for Arizona assistant coach Mark Phelps. Last week, the university placed him on administrative leave because of a violation of NCAA rules. Phelps supposedly committed a violation in relation to the academic transcripts of former Arizona recruit Sharif O’Neal, the son of Shaquille O’Neal who backed out of his commitment to Arizona and signed with UCLA. The violation is not related to the federal investigation into college basketball.

Naturally, Phelps has denied violating any rules. However, suspending Phelps appears to be the first step in Arizona firing him. Many also believe this to be a bad omen for head coach Sean Miller. Violations by his assistants could potentially be tied back to Miller, who could then be held responsible and ultimately fired. Meanwhile, the Wildcats have lost five in a row on the court and are just 5-6 in the mediocre Pac-12, making them a long shot to reach the NCAA Tournament.

A Little Too Sweet

Speaking of the Big Dance, the NCAA released its initial top-16 teams over the weekend, giving us a preview of the tournament field. Duke was given the top overall seed, followed by Tennessee, Virginia, and Gonzaga, who would be the no. 1 seeds if the tournament started today. The ACC and Big Ten each had four teams in the top 16 while no other conference had more than two. Of course, there’s a good chance the top-16 will have some shakeups over the next month.

Things have not gone according to plan for the Kansas Jayhawks this season, and now they’re going to be without senior Lagerald Vick for the foreseeable future. Vick has taken a leave of absence from the team to attend to personal matters. His mother said that she wants Vick home in Memphis, saying: “We need him here for a couple of weeks. I need him. There’s a lot going on. It’ll work out.”

The Jayhawks have already lost Udoka Azubuike to a season-ending injury while Silvio de Sousa has been ruled ineligible. Kansas now has four freshmen in their starting lineup. However, they’ve managed to win their last two games to stay within a game of Kansas State for the top spot in the Big 12.

Meanwhile, Kansas State has lost guard Cartier Diarra to a hand injury. The sophomore will undergo surgery on the injured hand, and there is no specific timetable for his return. Before missing Tuesday’s game against Texas, Diarra scored 10 or more points in four straight games coming off the bench. The Wildcats only have seven players who average more than 10 minutes per game, so their rotation will be thin without Diarra as they try to retain their spot atop the Big 12 standings.

As they run away with another West Coast Conference title, the Gonzaga Bulldogs will be without forward Killian Tillie for the rest of the regular season. Tillie, who missed the first 15 games of the season with a sprained ankle, has been sidelined by a torn ligament in his foot. He has not been a huge factor this season because he’s only had nine games to work his way back into shape. However, he was the team’s second-leading scorer last season, so he’s capable of making an impact when healthy. At the moment, Gonzaga is optimistic that Tillie will be able to return for the postseason.

After starting the season as a top-25 team, things have gone downhill for West Virginia and may be about to get worse. Wes Harris and Esa Ahmad, both starters, have been dismissed from the team for a violation of athletic department policies. Ahmad was averaging 12 points and nearly six rebounds per game while Harris was chipping in eight points and 4.5 rebounds every time out. Needless to say, losing those two players isn’t likely to help the Mountaineers, who are just 2-9 in Big 12 play and 10-14 overall. Bobby Huggins is in danger of suffering just his second losing season since 1985.