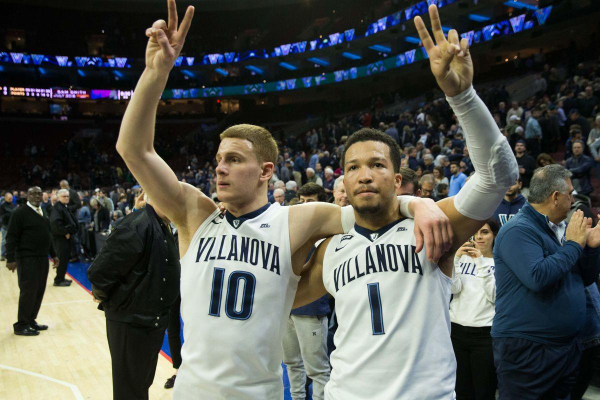 On Wednesday night, the number 18 Michigan Wolverines (2-0) will travel to Villanova Pavilion to take on the number 8 ranked Villanova Wildcats (2-0).  If those two teams sound familiar, it is because this is a rematch of the national championship game from last year, one that Villanova ultimately won 79-62. Since many of those players have moved on to the NBA, the two teams are looking to establish a new identity as they both hope to return to a national championship game.

To start the season, both teams are 2-0.  For Michigan, their two wins have come against Norfolk State (63-44) and Holy Cross (56-37).  The win over Holy Cross was a little troublesome knowing they were down by 6 at halftime, but a 38-13 second half ensured a comfortable win.  For Villanova, they are also 2-0 after beating Morgan State University (100-77) and Quinnipiac University (86-53).
Tipoff for Wednesday night’s matchup is scheduled for 6:30 pm ET.  In this one, the Villanova Wildcats are 7-point favorites at home.  The over/under for total points scored is currently set at 140.5.<

Michigan Hoping For A Little Revenge

Michigan definitely has some shoes to fill.  They are losing three starters, including Moe Wagner, Duncan Robinson, and Muhammad-Ali Abdur-Rahkman.  One positive for the Wolverines, though, is that Charles Matthews decided to return to Michigan for another season after considering going into the draft.

Just two games into the season, it is a very small sample size when looking at the statistics.  Still, the Wolverines are currently averaging just 59.5 points per game but are only allowing a paltry 40.5 per game.  In the two games, Michigan has shot just .364 from the field (40 for 110) and just .200 from behind the arc (9 for 45).  While is may be too quick to panic, there are concerns that while the defense may be built to win now, the offense is going to be what keeps the team down.

In terms of individual leaders, Ignas Brazdeikis has led the way in scoring for the Wolverines averaging 15.5 points per game. At 6’ 7”, the freshman has immediately shown signs that he could be the number one scoring threat for Michigan. He is also averaging 5.5 rebounds. Right on his heels is Charles Matthews, who has averaged 15 points per game.  Behind these two are big Jon Teske (9 points per game, 6.5 rebounds) and Isaiah Livers (7.5 points, 9 rebounds).

Villanova Looking For Win At Home

Villanova has now won two national championships in the last three years, and they would love to make it a third this year.  For Jay Wright’s crew, they are going to have to do it without several of their key players from last year.  Jalen Brunson, Mikal Bridges, Donte DiVincenzo, and Omari Spellman are all in the NBA.  Still, Villanova has recruited well to pair with the returning players that they do have.

While Villanova might be lacking some of the star power from last year, the team has already shown in the first two games that it can still score.  They are averaging 93 points per game and are giving up just 65.  From the field, they are shooting 48.9% (66 for 135) and 34.8% from behind the three (24 for 69).  While the numbers look good, they are going to have a significantly tougher test on Wednesday against Michigan’s stingy defense.

This one comes down to scoring.  I think that Michigan’s defense is going to keep them in the game for much of this one, but ultimately, I just think Villanova is going to be able to outshoot the Wolverines.  As a result, I think this one could slip away from Michigan late, and I foresee Villanova not only winning but covering the 7-point spread, especially since they are playing at home.