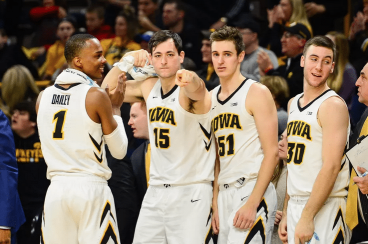 For Maryland, they have been relatively inconsistent as of late, having gone 4-4 in their last eight games. In that stretch, they have wins over No. 15 Purdue, Nebraska, Northwestern and Ohio State, but have losses to No. 7 Michigan, 10 Michigan State, No. 22 Wisconsin, and unranked Illinois.

For the Hawkeyes, they come into this one having won four games in a row since being upset by Minnesota on the road, 92-87, at the end of January. That loss didn’t seem to have too much ill effect on the Hawkeyes, though, as they turned around and beat No. 7 Michigan in their next game, 74-59, at home. Iowa has played especially well at home, as they are 16-2 this year as the home team on the scoreboard. The two will matchup Tuesday with tipoff scheduled for 8:00 pm ET.

In this contest, the Iowa Hawkeyes come in as 1.5-point favorites playing at home. The over/under for this game is set at 151.5 points.

On the offensive side, Iowa has certainly been the more dominant of the two teams. They currently rank 28th in the nation, averaging 81.6 points per game. They have also been very efficient, shooting 47.4% from the field, good for 44th overall. They also take care of the ball and distribute it well as their assist to turnover ratio is 1.35, good for 31st overall. Maryland currently ranks 158th in the nation in scoring, averaging 73.6 points per game.

The last thing that you want before tournament play begins is to have no idea what your team is going to play like when they take the floor. Unfortunately, for Mark Turgeon, that has been exactly what has happened over the last several weeks with his squad. One day they will come out and play well, the next time it is like they are a different team. Against the high-octane offense of Iowa, he is going to have to hope that his team’s stingy defense shows up.

On offense, leading the way for Maryland are guard Anthony Cowan Jr. and forward Bruno Fernando. For Cowan, he is averaging 15.8 points per game despite shooting just 39.9% from the field. Cowan is adding 3.8 rebounds, 4.5 assists and 1 steal per game. For Fernando, he comes in at a much more respectable 14.5 points on 66.1% shooting. He is also averaging a double-double as he is pulling down 10.6 rebounds per game, as well as 1.9 assists and 1.9 blocks.

Aside from these two, Jalen Smith is the only other player to be averaging double-digits as he is averaging 11.8 points, 6.8 rebounds, and 1.1 assist per game.

After upsetting Michigan, Fran McCaffery’s Iowa squad has been flying high, and they hope to keep it going against a solid Maryland team. As the tournament approaches, every win is crucial, but wins over other top-25 teams can help pad your seeding.

Leading the way for Iowa this season has been forward Tyler Cook. The junior is averaging 16.3 points per game on 55.2% shooting from the field. He is also pulling down 8.1 rebounds and dishing out 2.6 assists per game.

Iowa Gets Another Home Win

The old saying is that defense travels and generally that is true. For my money, though, despite their billing as a top defensive unit, I have not been impressed with the Terrapins’ consistency as of late. They certainly may show up and play like the top-25 team that they are, but I think the smart money is on Iowa playing at home. Their offense has been electric this year, and I certainly expect that Carver-Hawkeye Arena will be buzzing. Take Iowa at -1.5 in this one.