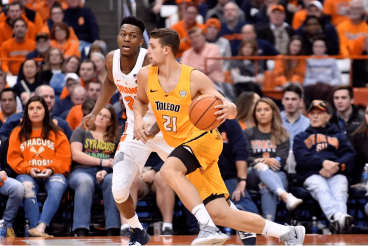 It is a matchup of East versus West in the Mid-American Conference on Friday when the No. 25 and MAC East-leading Buffalo Bulls (21-3, 9-2 in the conference) travel to the Savage Arena to take on the MAC West-leading Toledo Rockets (20-4, 8-3 in the conference).

For the Bulls, they have won two in a row since losing to Bowling Green at the beginning of the month, 92-88. While they lost big to the one top-25 team that they faced, the Bulls have played well throughout the season, earning a top-25 ranking themselves. For Toledo, they have won five in a row, including a win over Bowling Green on Saturday, 78-71. Still, the first time these two matched up, it was all Buffalo, as they beat Toledo 110-80 in Buffalo. For Toledo, they are trying to show that game was a fluke and will look to even the season series. The two will square off on Friday with tipoff scheduled for 7:00 pm ET.

In this contest, the Buffalo Bulls come in as 2.5-point favorites despite playing on the road. The over/under for this game is set at 154.5 points.

Defensively, Toledo comes in as the better team. They currently rank 80th overall, allowing opposing offenses just 67.7 points. Toledo does a really nice job controlling the defensive boards, averaging 30.25 defensive rebounds per game (5th in the nation). For Buffalo, they come in at 179th in the nation, allowing 71.2 points per game.

When playing in a conference like the MAC, it is hard to generate the type of buzz and respect that can get you recognized as being one of the best in the country. That is exactly what the Bulls have done, though. While their stats are padded by a weaker schedule, the Bulls have shown throughout the season that they can be tough to beat, and hope to be one of those Cinderella type teams come March.

Leading the way for the Bulls is senior guard CJ Massinburg. On the season, Massinburg is averaging 18.5 points on 48.6% shooting. He is also shooting 78.9% from the free throw line and 42.9% from behind the arc. Massinburg is also chipping in 6.3 rebounds, 3 assists and 1.3 steals per game.
Beyond Massinburg, guard Jeremy Harris and forward Nick Perkins are the other major contributors on the offensive side. Harris is averaging 13.9 points, 6.4 rebounds, 2.9 assists and a steal per game. For Perkins, he is averaging 13.3 points, 7.6 rebounds and a block per game.

For Rockets fans, it is probably a tough pill to swallow seeing a team similar in the Buffalo Bulls getting the respect of a top-25 ranking while the Rockets have had a similarly successful season. Still, to be the best in the conference you have to beat the best, and after getting beaten pretty badly on the road earlier in the year, Toledo will be hoping to exact some revenge at home.

Leading the way for Toledo this season has been guard Jaelan Sanford. On the season, Sanford is averaging 15.8 points, 4.2 rebounds and 3.1 assists per game. He is shooting 42.65 from the field and 87.3% from the free throw line.

Toledo Gets Their Revenge

Statistically, these teams seem too similar to be beating one another by 30 points like in the first matchup. Buffalo is a little better on the offensive side while Toledo gets the advantage on the defensive side. The biggest difference for me in this one compared to their first go-around is that it is Toledo who has been on the hotter streak as of late and they get this one at home. Whether Toledo gets the straight up win or not remains to be seen, but for my money, I like them getting the 2.5 points at home. Take Toledo at +2.5.