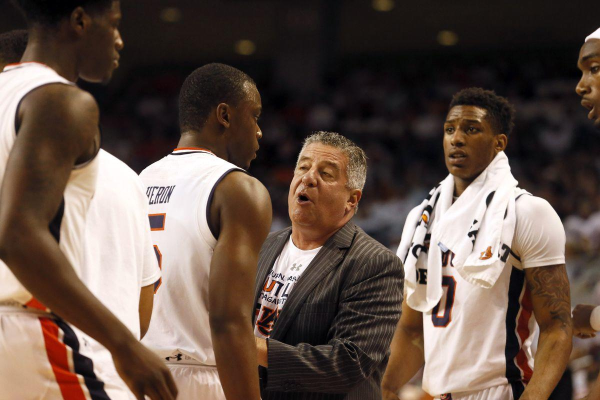 If round one of the NCAAtournament is any indication, round two should be really good.  With the first day of the second round opening up Saturday, there are several games on the docket that present interesting matchups but possibly none more so than that of the No. 5 Auburn Tigers versus the No. 4 Kansas Jayhawks. To get to this point, Auburn narrowly escaped an upset at the hands of New Mexico State winning 78-77.  In that game, Auburn’s Jared Harper led the way with 17 points on 6 of 11 shooting and added 4 assists.  For Kansas, they had a much less stressful matchup against the Northeastern Huskies, winning 87-53.  In the win, Dedric Lawson led the way with 25 points on 9 of 16 shooting (including 3 of 5 from behind the arc).  He also added 11 rebounds in the win.  The two will square off on Saturday at Vivint Smart Home Arena with tipoff scheduled for 9:40 pm ET.

In the matchup, the Auburn Tigers surprisingly come in as 2-point favorites playing at the neutral site.  The over/under for this game is set at 147.5 points.

On the offensive side of the ball, Auburn has had a really nice season.  They rank 36th in the nation averaging 79.5 points per game.  Auburn can be especially deadly from the three. On the season, they rank 4th overall with an average of 11.3 three pointers per game.  It is not that they just shoot a lot of threes, either, they are fficient.  They currently are shooting 37.6% from beyond the arc (good for 37th in the nation).  For Kansas, they aren’t too bad either on the offensive side averaging 75.7 points per game (good for 95th in the country).

With Auburn coming in at -2, they are the rare lower seed that is actually favorite in the matchup.  Their combination of long range shooting and solid defense can create nightmares for opponents.  Still, for coach BrucePearl, he knows that as the rounds move on, there is little room for error and that is especially true against Kansas.

Kansas Hoping To Ride Lawson To Third Round

There is no denying that DedricLawson is an absolute stud at basketball.  This season, the forward is averaging 19.3 points on 49.1% shooting.  In fact, he is averaging a double-double as he is also pulling down 10.3 rebounds per game.  All the more impressive, he is also adding 1.7 assists, 1.3 steals and 1.1 blocks per game.

Unfortunately, though, with Lagerald Vick and UdokaAzubuike out for the year, Kansas has not always shown the consistent success we would expect out of a Bill Self team.  The next leading scorer is Devon Dotson who is averaging 12.3 points, 3.7 rebounds, 3.5 assists and 1.3 steals per game.  It is worth noting, though, that Dotson tweaked his left ankle in their opening matchup so it will be interesting to see if he is limited at all or if he has explosiveness in the game against Auburn.  Outside of Lawson and Dotson, no other Jayhawk is averaging double-digit scoring.

This one comes down to consistency for me.  Despite the close call against New Mexico State, Auburn has been playing some good basketball to close the season.  They have won 9 games in a row coming into Saturday including two wins over Tennessee as well as wins over Florida and MississippiState.  While it can always be risky to bet on teams that live and die by the three, they have a solid defense to go along with their offense. For Kansas, inconsistency has plagued them down the stretch.  Yes, they had an easy win in their first matchup of the tournament, but prior to that they had lost 3 of their last 8 games including losses to Iowa State, Oklahoma and Texas Tech (their average loss in those three was a little over 16 points).  With DedricLawson they have a chance to be in any game, but it wouldn’t shock me if Auburn gets the win in this one.  For my money, I am taking Auburn despite giving up the 2 points.