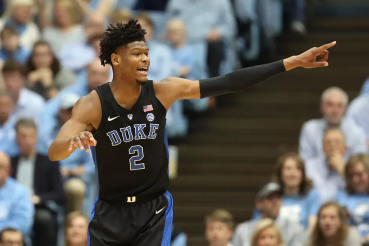 Florida State stunned top-seeded Virginia in the ACC Tournament semifinal round, and their reward is a date with the Duke Blue Devils in the championship game. Duke was finally able to get past rival, North Carolina, in a game that was a back and forth thriller. The Blue Devils earned an 80-78 victory over the Seminoles in their only meeting this season.

Duke was supposed to run away with the ACC crown, but injuries held them back, and they finished in third place in the regular season. The Blue Devils bring a 28-5 record into this game and are ranked 5th in the country. Florida State finished the ACC regular season with a 13-5 record to finish in fourth place. The Seminoles are looking to improve their seed in the NCAA Tournament. Duke is -8.5 over Florida State on Saturday night.

Seminoles Are Athletic and Deep

The Florida State Seminoles don’t have a real superstar on their roster, but they are one of the most athletic and deepest teams in the country. Head coach Leonard Hamilton routinely plays at least ten players per night, and they have a ton of size. Florida State is averaging more than 75 points per game this season while giving up just over 67 a night. The Seminoles won’t be scared of the Blue Devils, and they have a ton of momentum after beating top-seeded Virginia in the semifinals. Florida State looks like a team that can make a deep run in the NCAA Tournament this season.

Mfiondu Kabengele is likely the Most Valuable Player of the Seminoles team, but he has had plenty of help. Kabengele leads Florida State with 12.9 points per game and is also a defensive force in the paint. Guards Terance Mann and Trent Forrest combine to score more than 21 points per game this season and are both going to have to find ways to contribute on offense in this game. It’s hard to really predict who is going to be the leading scorer for Florida State, but you can expect that someone is going to step up.

Duke struggled mightily without Zion Williamson on the floor, but they are rolling now that he is back to being fully healthy. Williamson poured in 29 points in his first game back against Syracuse, and then put up a heroic 31-point performance in the victory over North Carolina. There is a reason that he will be the top pick in the NBA Draft this summer and is considered the best player in college basketball.

The Blue Devils are averaging close to 84 points per game this season, and they will look to push the tempo against Florida State. RJ Barrett leads the team with 23.1 points per game, and point guard Tre Jones has been scoring better of late. Duke is still shooting just over 30 percent from the three-point line as a team, and they will have to make shots in this game.

Florida State is coming into this game with a ton of momentum, and they know that they can play with Duke. The problem is that the Seminoles just don’t score enough points, and the Duke offense is on a roll. Zion Williamson is making up for lost time, and he will have another monster game on Saturday night. Florida State will be a tough team to beat in the NCAA Tournament, but Duke will blow them out on Saturday night. Take the Duke Blue Devils -8.5 over the Florida State Seminoles.