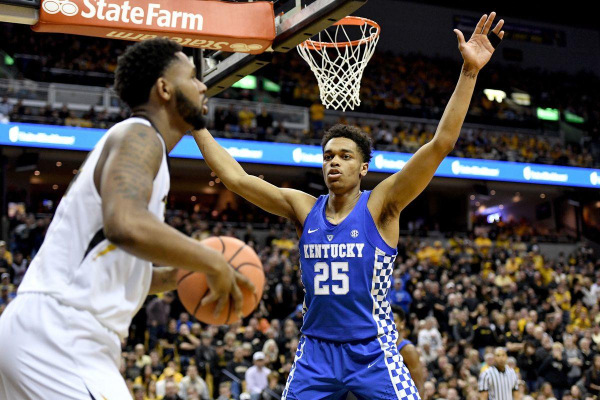 For Mississippi State, they have won 2 in a row including a 71-55 win over Vanderbilt on Saturday. Their last loss was against number 18 Mississippi. Their two other losses were against South Carolina and Arizona State. Despite the strong record, they have yet to beat a top-25 team and will have their hands full against a solid Kentucky team. For Kentucky, they have four in a row, including an 82-80 win over number 14 Auburn on the road on Saturday. Mississippi State and Kentucky will square off on Tuesday with tipoff scheduled for 7:00 pm ET.

In this contest, the Kentucky Wildcats come in as 8-point favorites playing at home. The over/under for total points scored is set at 147.5.

On the offensive side, Kentucky has ranked 43rd in the nation in points per game with 80.2. Furthermore, they rank 21st in the nation in field goal percentage (48.9%) and 36th in free throw percentage (75.2%). For Mississippi State, they rank 59th in points scored (79 per game) and shoot really well behind the arc (38.3% which is good for 31st in the country). In fact, Mississippi State relies a lot on the three-ball as they are averaging 9.2 threes per game.

Despite the top-25 rank and the solid record, Mississippi State is still looking for that signature win to help define their team. A win against Kentucky would go a long way in that regard. To do so, they will be looking to their leading scorer, senior guard Quinndary Weatherspoon. On the season, he is averaging 16.6 points, 5.8 rebounds, 2.9 assists and 1.3 steals per game. He is also shooting 48% from the field, 83.1% from the free throw line and 32.7% from behind the arc.

Currently sitting in third in the conference, Kentucky would love to continue to put pressure on Tennessee and LSU with a win over a conference foe, especially ahead of a big matchup with number 7 Kansas on Saturday. To do so, the Wildcats will look to a quartet of scorers, all averaging double-digits. Currently leading the way is freshman guard Keldon Johnson. On the season, Johnson is averaging 14.9 points, 5.1 rebounds, and 1.6 assists while shooting 50.9% from the field and 39% from behind the arc.

The other three players averaging double-digits are Tyler Herro (13.5 points, 4.2 rebounds, 2.3 assists, and 1.1 steals), Reid Travis (13 points, 6.4 rebounds, 1.1 assists) and PJ Washington (11.8 points, 7.9 rebounds, 2 assists and 1.1 blocks per game). In total, the Wildcats go with 8 different players who average over 11 minutes per game and often rely heavily on the top four for scoring.

Taking Mississippi State And The Points

This one is tough to call for me. I like Kentucky in this one in a straight-up matchup, but 8 points is a lot to spot a team like Mississippi State, who can score it a little themselves. Both of these teams are 8-9 against the spread this season while most of the basic stats (scoring offense, scoring defense, field goal percentage, etc.) are all relatively close. I like that Mississippi State shoots it a little better from the three and, ultimately, I think they keep this one close enough to cover the spread. Again, straight up I am taking Kentucky, but with Mississippi State getting 8 points, I am going to take the Bulldogs in this one, despite playing on the road.