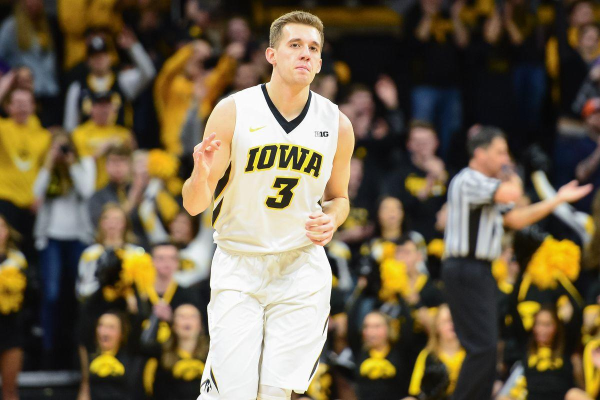 For Michigan State, they have been rolling as of late, winning 12 in a row and not having lost since November 27th, an 82-78 loss to Louisville. Their only other loss was a 92-87 loss to Kansas in the first game of the season; otherwise, the Spartans have been rolling. Over their 12-game winning streak, they have only won one game by less than 6 points and the last time they played Iowa, at home, they won 90-68. Now playing on Iowa’s court, they are going to see if they can replicate their success.

For Iowa, since that loss to Michigan State, they have gone 10-1, with their only other loss being against Purdue. Looking for some revenge, Iowa will host the Spartans on Thursday with tipoff scheduled for 7:00 pm ET.

In this contest, the Michigan State Spartans come in as 5.5-point favorites despite playing on the road. The over/under on total points scored comes in at 156.5.

On the offensive side, both of these teams have been dominant this season, with Michigan State ranking 20th in the nation and averaging 83.8 points while Iowa comes in at 82.8 points, good for 26th. Michigan State has been especially dominant in efficiency, shooting 49.9% from the field, good for 10th overall. Iowa comes in at 46th, shooting 47.9%. While both teams are solid all-around offensively, Michigan State has made a knack for beating up on teams. They currently rank 8th in the nation with an average scoring margin of 17.8 points.

Defensively, Michigan State is still dominant, only allowing opposing teams to score an average of 66.1 points per game (good for 51st in the nation). Iowa, on the other hand, comes in at 202nd, allowing 72.2 per game. One area that the Spartans are especially dominant is in the paint. Michigan State is 2nd in the nation with a rebounding margin of 11.1 and 8th in blocked shots per game at 5.7.

Spartans Looking To Show That Earlier Win Was No Fluke

When Tom Izzo puts a team together, he is not just looking to be competitive; he wants to win national championships. This year’s team is no different, and they certainly have a shot of making some noise come March.

The Spartans have been led offensively by a trio of players this year in Cassius Winston, Nick Ward, and Joshua Langford. For Winston, he is averaging 18 points, 2.4 rebounds, 7.3 assists and 1.1 steals per game, while shooting 48.9% from the field and 44% from the three. For Ward, he is averaging 15.7 points, 6.9 rebounds, and 1.4 blocks while shooting 62.8% from the field. The Spartans are going to need these two to continue to play well as their third-leading scorer, Joshua Langford, has had to miss time due to a foot injury. Prior to the injury, he was averaging 15 points a game, which leaves a huge gap in the Spartans’ offense.

On Monday, they were able to fill that gap and come out with a victory against the number 13 Maryland Terrapins. Amazingly, they were able to overcome not only Langford’s absence but an off night from Ward that saw him score 0 points. Instead they got big contributions from Kenny Goins (14 points, 12 rebounds), Aaron Henry (12 points, 6 rebounds), Matt McQuaid (10 points, 4 rebounds, 3 assists) and Xavier Tillman (10 points). While their offense may have had an off night, it speaks to their versatility as their defense still held Maryland in check.

Iowa Wanting To Get Revenge On Home Court

For Iowa, they were embarrassed by their loss at Michigan State and will be looking for revenge in this one. The Hawkeyes are led by Tyler Cook, who is averaging 16.5 points, 8.2 rebounds and 2.6 assists per game while shooting 59.1%. The last time these two played, Cook had 15 points and 8 rebounds.

Yes, Michigan State is down one of their best players in Joshua Langford. Yes, they are coming off of a game where Nick Ward didn’t score. Yes, they are playing on the road. Still, I think Michigan State covers the spread in this one. They are just that good on both ends of the floor. This was evident from their last game, where they held a pretty good Maryland team to just 55 points. While I don’t think that they hold Iowa to that low of a score, I also think they will have an easier time scoring against Iowa. I don’t expect it to be quite the blowout like the first time these two met, but I am still taking the Spartans despite laying 5.5 points.