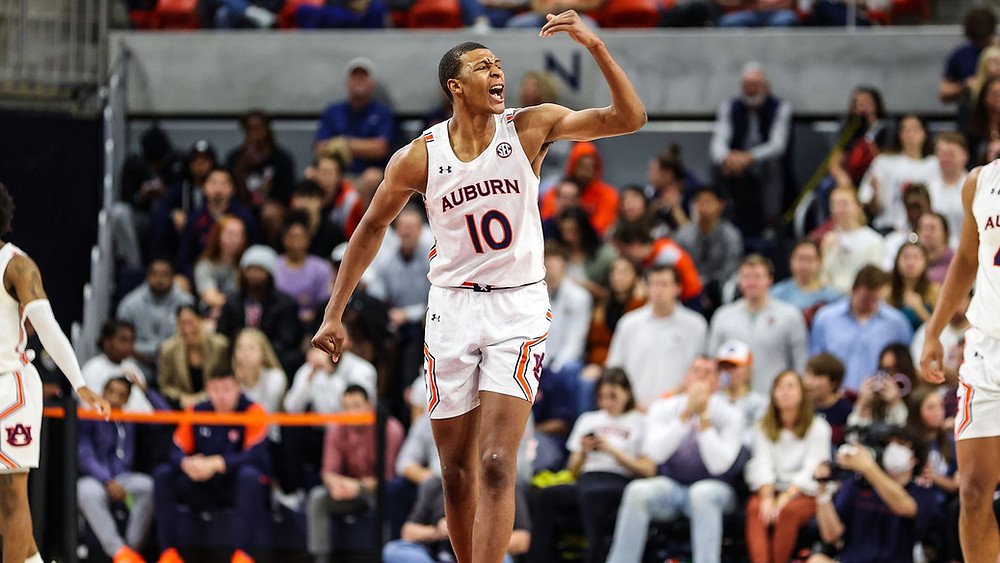 First place in the SEC is on the line in a Saturday afternoon showdown on the Plains, as #2 Auburn hosts #12 Kentucky in a must-see college basketball matchup.

The Tigers enter their showdown with the SEC’s preeminent basketball power with 14 straight wins, and they have jumped out to a perfect start in conference play.

While Gonzaga may be atop the college basketball rankings, Auburn has a lot of backers as the best team in the country. In fact, Auburn had more first-place votes (36) in this week’s AP poll than Gonzaga, who had 25.

It stands to reason that the Tigers will lock down #1 with a win over visiting Kentucky, who has recorded four straight wins since a loss at LSU. The Wildcats blew out a ranked Tennessee team last week, and a win over Auburn would enhance their hopes of landing the best possible March Madness seed.

Which team’s strength in depth will stand tallest in this top-tier tilt? Will Kentucky deliver Auburn’s first loss of 2022? Or will the Tigers add to their credentials as the potential top overall seed in March?

Will Kentucky’s Depth Win Out Over Auburn’s?

The Wildcats have five players averaging double figures in points, with Davion Mintz not far behind at 9.1 PPG. Big man Oscar Tshiebwe (16.1 PPG, 14.8 RPG), the nation’s leading rebounder, is a leading National Player of the Year candidate. The double-double machine has 12 double-doubles this season and has eight games with 16+ boards.

However, the backcourt has been leading the way for Kentucky recently. Heralded freshman Tyty Washington Jr. (14.2 PPG, 4.2 RPG, 4.6 APG) is not going to be in the collegiate ranks this time next year, unless he just happens to really, really like the college experience. Washington torched Tennessee for 28 points on 10 of 13 shooting, and in a win over Georgia, he had 17 points and a school-record 17 assists.

John Calipari beefed up the frontcourt with a transfer in Tshiebwe (West Virginia), and he also added two quality transfers in the backcourt in Sahvir Wheeler (Georgia) and Kellan Grady (Davidson). Both have been key to Kentucky’s success so far, with Wheeler (10.4 PPG, 7.1 APG) third in the nation in assists per game and Grady (11.4 PPG) shooting a career-best 43 percent from three.

But all four of the above will need to do more at Auburn than in Wednesday’s hard-fought 64-58 win at Texas A&M. Tshiebwe had only five shot attempts and eight points, Washington was only 3 of 10 from the field, Grady was 2 of 10 (1 of 9 from three), and Wheeler had a season-high eight turnovers.

Is Kessler the Key for Auburn’s Hopes?

Kentucky has Tshiebwe, but Auburn has a beast of their own patrolling the paint in North Carolina transfer Walker Kessler. Kessler (10.3 PPG, 7.4 RPG, 4.2 BPG) is second in the country in blocks per game and has 13 blocks in his past two games. In a win over LSU last month, Kessler had a triple-double, recording 16 points, 10 rebounds, and 11 blocks.

And like Kentucky, Auburn has their own star freshman leading the way as well. Forward Jabari Smith Jr. (15.8 PPG, 6.3 RPG) is touted as the potential #1 pick in the 2022 NBA Draft and has scored in double figures in 15 straight games. A guy who is 6’10’’ and shoots 43 percent from three–at a decent volume, at that–presents a matchup problem for any team.

While Smith is the headliner for Auburn–and for good reason–and is the kind of difference-maker that can lead a team to a national title, Kessler’s presence might be decisive in this Kentucky-Auburn matchup. There aren’t a lot of players that can go toe-to-toe with Tshiebwe, so if Kessler can come out on top in that matchup, Auburn will be in a strong position.

In the most recent Kentucky-Auburn matchup, the Wildcats outlasted the Tigers 82-80 at Rupp Arena in February.

Both teams look a lot different than they did then. Just as Kentucky has added three key transfers and a star freshman, Auburn has done the same. In addition to Smith and Kessler, Bruce Pearl added Wendell Green Jr. (13.1 PPG, 4.0 RPG, 5.1 APG) from Eastern Kentucky and K.D. Johnson (12.8 PPG, 2.3 steals per game) from Georgia.

With the scoring depth that both teams have, another high-scoring game should be expected. Kentucky is fourth in the nation in offensive efficiency, while Auburn ranks 15th. But turnovers will ultimately tip the scales in Auburn’s favor.

Kentucky won’t have a second straight substandard offensive performance, but Auburn will make enough plays on the defensive end to notch a win that could–and should–catapult them to the top of the polls come Monday.

The 2022 Formula 1 season is only six races deep, but the race for this season’s championship alerady appears to be down to just two drivers. Last season, Red Bull driver Max Verstappen claimed his first Formula 1 World Drivers’ Championship in highly controversial circumstances, with Lewis Hamilton denied what would have been a record-breaking END_OF_DOCUMENT_TOKEN_TO_BE_REPLACED