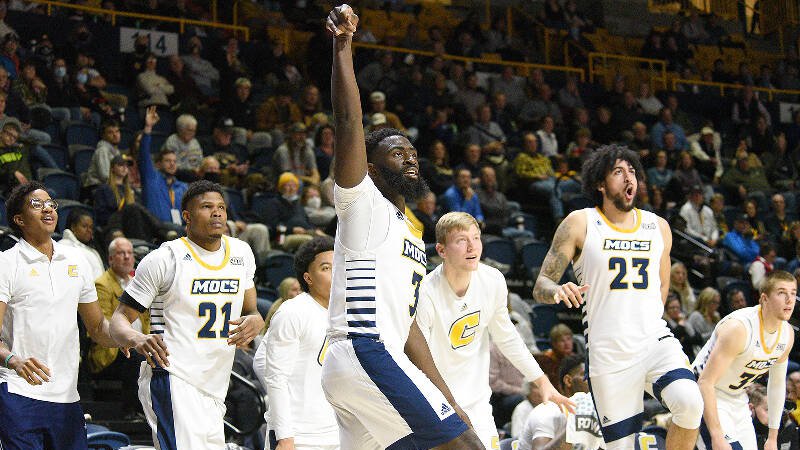 This season, Furman and Chattanooga have been the top two men’s basketball teams in the Southern Conference. Tonight, they face off with an automatic bid to the NCAA Tournament on the line in the championship game of the SoCon tournament in Asheville, North Carolina.

In the regular season, the Mocs dominated the league, finishing two games clear of the Paladins. With wins over The Citadel and Wofford, Chattanooga is a win away from the program’s first Big Dance berth since 2016.

The Paladins have developed into one of the top programs in the SoCon over the past several seasons under Niko Medved, now at Colorado State, and then Bob Richey. But this is their first conference tournament championship game appearance since 2015.

Can Chattanooga Slow Down Frequent Firers Furman for the Third Time This Season?

If three-point shooting turns you off, then Furman is not your team. Entering the SoCon championship game, the Paladins are tied for 33rd in Division I in scoring, averaging 78.1 points per game.

A big reason for that is their prolific and proficient perimeter shooting, as they are one of the best in the country from outside. Furman is second only to VMI in three-pointers made per game (11.9), tied for third in attempts per game (31), and tied for tenth in three-point shooting percentage (38.4 percent).

Furman is one of only eight teams in Division I that averages 30+ three-point attempts per game and one of four with 1000+ attempts this season. And they have the highest shooting percentage in both of those groups.

But the Paladins are certainly no one-trick ponies, nor are they inefficient or irresponsible with the ball in the name of getting their shots off.

Entering today, Furman ranks second only to Iowa in the country in assist-to-turnover ratio, and they are 32nd in the country in two-point field goal percentage (55.0 percent). Like the Hawkeyes, the Paladins share the wealth well, with no one averaging more than 3.8 assists per game.

However, Chattanooga had their number in both regular season meetings this season. Including their two wins in the conference tournament, the Paladins have scored 70+ points 15 times in 20 SoCon games this season. UNC Greensboro, who is one of the nation’s better defensive teams, held them under 70 twice, and so did the Mocs, who have held 13 SoCon opponents under 70.

How did they do it? By overcoming a halftime deficit in both games and shutting down one of the top offenses in college basketball.

Though the Paladins made above their season percentage in the first meeting, they were held well below their season average in three-point attempts in both games.

In the second game, which was in Greenville, Conley Garrison (42.9 percent) and Alex Hunter (41.4 percent), who are two of the best perimeter shooters in the country, went a combined 1 of 11 as the Mocs overturned an 11-point deficit in the second half.

That performance was the team’s worst this season with regards to three-point percentage and makes. And it is one of only four times this season that the Paladins have hit less than 30 percent of their threes in a game.

The most recent of those four times was in yesterday’s 71-68 semifinal win over Samford, as they made only 9 of 32 (28.1 percent) from deep.

To date this season, Furman has not been under 30 percent in consecutive games a single time. Nor have they gone three consecutive games without making at least ten threes, and they enter tonight’s title tilt having made only nine in their two tournament wins.

Beating a good team three times in one season is difficult. Chattanooga did so against Wofford and throttled the Terriers by 23 in the semis, but Furman is a better team than Wofford.

But so does Furman. They won at Louisville, nearly upset Mississippi State in Starkville, and hung with North Carolina for a good portion of a 13-point loss in Chapel Hill.

The key for Furman will be sinking some shots early, and they must also limit the impact of Chattanooga’s likely domination on the glass. Crashing the boards is not something that the Paladins excel at, and the Mocs had a double-digit rebounding advantage in both regular season wins.

In both games, Furman led at halftime but was unable to seal the deal. If the Paladins can play a full 40 minutes tonight, a win will be theirs for the taking.

All things, good or bad, must come to an end at some point. And this will be where Furman’s NCAA Tournament drought ends.