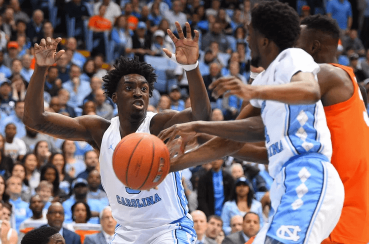 Saturday night features an ACC rematch of epic proportion when the No. 4 Duke Blue Devils (26-4) travel to the Dean Smith Center to take on the No. 3 North Carolina Tar Heels (25-5). The first time these two met was just a couple weeks ago when North Carolina upset Duke on its home court. The lowlight of the game came just a minute into the game when Duke superstar Zion Williamson sprained his knee, an injury that has put him out of action since. This allowed North Carolina to get the edge and ultimately win 88-72. In that game, Luke Maye led the way for the Tar Heels with 30 points and 15 rebounds. In the loss, Duke’s RJ Barrett scored 33 points and had 13 rebounds. The two will square off again Saturday with tipoff scheduled for 6:00 pm ET.

Coming into this one, Duke has certainly been feeling the effects of not having Williamson on the court. They have lost 2 of their last 5 including the game against North Carolina and a loss at Virginia Tech. In their last matchup, they narrowly escaped being upset by Wake Forest with a one-point win. For the Tar Heels, they have been on a roll. They have won 6 in a row and are looking to sweep the season series against Duke as they prepare for the ACC tournament next week.

In this contest, the North Carolina Tar Heels come in as 3-point favorites playing at home. The over/under for this game is set at 166 points.

Offensively, these have been two of the best teams in the country all season long. For the Blue Devils, they currently rank 7th in the nation, averaging 85.1 points per game. Still, in the last 4 games, they have only hit the 80-point mark once. For North Carolina, they come in 3rd in the country, scoring 87.1 points per contest.

On the defensive side, it is Duke who is ranked higher. They are currently ranked tied for 61st in the nation, allowing 67 points per game to opponents. Again, though, without Zion, they are a whole different team, on both ends of the court. North Carolina, on the other hand, falls much further down the defensive standings. They currently rank 223rd in the nation, allowing an average of 73 points per game to opponents.

Duke Looking To Do It Without Their Best Player

Coach Krzyzewski and the Duke Blue Devils have had to deal with adversity over the years, but losing their best player towards the end of the season has certainly put a damper on their spirits. More importantly, if there is anything that these last five games have shown is that they are susceptible to an early out in the tournament without him. Still, it appears that Duke is prepared to jeopardize their ability to win this one game in hopes of being completely ready for both the ACC and NCAA tournament.

Even with Zion out, Duke still has their leading scorer. Freshman forward RJ Barrett has had an exceptional season, averaging 23.3 points per game on 46.3% shooting. He is also averaging 7.4 rebounds and 4.2 assists per game. Aside from Barrett, Cam Reddish is the next leading scorer. He is averaging 14 points, 3.7 rebounds, 2.1 assists and 1.7 steals per game.

Just as in the first game, don’t expect North Carolina to feel sorry for Duke. I certainly expect that Chapel Hill will be electric tomorrow night and North Carolina fans would love to put another beating on the Blue Devils.

In the first matchup, though, it was Luke Maye who showed his exceptional ability. On the season, he is averaging a double-double with 14.9 points and 10.3 rebounds per game. He is shooting 43.8% from the field and is also chipping in 2.3 assists per game. Aside from these three, Nassir Little (9.6 points, 4.6 rebounds), Kenny Williams (8.6 points, 3.6 rebounds, 3.6 assists) and Garrison Brooks (8 points, 5.8 rebounds, 1.3 assists) have also had nice seasons.

If Zion Williamson was playing in this game, I would be all aboard the Duke bandwagon in a revenge game against North Carolina. The problem, though, is it sounds like he will be shelved until at least the ACC tournament. Without him in the lineup, Duke has been vulnerable in the interior, and I certainly anticipate Luke Maye will take full advantage of this again. While I don’t think North Carolina wins by 16 points like in the first matchup, but I do anticipate they will cover the 3-point spread. For my money, I am taking North Carolina at -3.