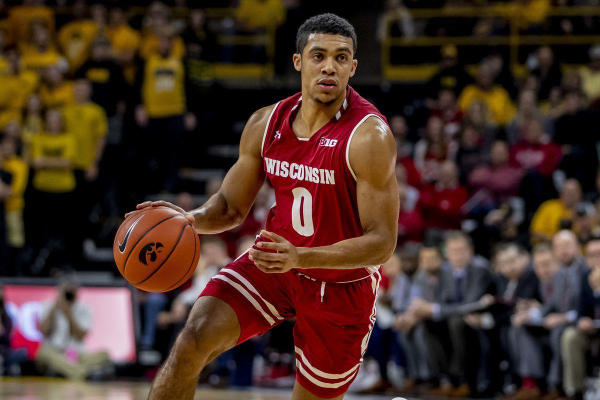 It will be an I-94 rivalry game when the number 12 Wisconsin Badgers (8-1) travel to Fiserv Forum on Saturday to take on the Marquette Golden Eagles (7-2). For Wisconsin, their lone loss came against no. 4 Virginia in a 53-46 battle. Since then, the Badgers have won 3 in a row, including a 69-64 victory against Rutgers on Monday. Wisconsin will now look to take care of business against Marquette in their annual rivalry game, one that has seen the road team win 6 of the last 8 matchups. For Marquette, they have won 4 in a row, including a Tuesday victory over UTEP, 76-69. The two will square off Saturday with a 5:00 pm ET scheduled tipoff.

The Marquette Golden Eagles come into this game as 1-point favorites playing at home. The over/under for total points scored comes in at 136.5.

Wisconsin Looking To Keep Winning Streak Going On The Road

Last year the Wisconsin Badgers didn’t do so hot in their rivalry game with Marquette, ultimately losing 82-63. One thing to keep in mind, though, is that a lot has changed in a year, including the health of some of Wisconsin’s key players. Most notably, D’Mitrik Trice and Kobe King were injured last year when the two matched up. Trice, in particular, will be key to trying to knock off Marquette. On the season, he is averaging 17 points and 3.8 rebounds. Most impressively, he is 60% (30 for 50) from behind the arc, leading not only his team but the nation in 3-point percentage.

In addition to Trice, another name to look for is Ethan Happ. Thus far this season Happ is averaging 17.7 points per game and a whopping 10.8 rebounds per game. He also has 15 blocks in their 9 games. Happ’s ability to control the boards may be a big key against a team in Marquette who likes to get out and run on the open floor.

Marquette is a team that likes to win the transition game and is led by Markus Howard. On the season, Howard is averaging 22.4 points, 4.6 rebounds and has 43 assists and 9 steals in 9 games. He currently is shooting 43% from the field and 36% from behind the arc. In their big win over Kansas State last week, Howard poured in a whopping 45 points as he was 11-17 from the field and 4 for 10 from behind the arc. Most impressive in that game, though, was the fact that he was 19 for 21 from the charity stripe.

Aside from Howard, the Golden Eagles rely on brothers Sam and Joey Hauser. On the season, Sam Houser is averaging 14.2 points per game and 6.2 rebounds. Joey is averaging 10.2 points and 5.8 rebounds per game. They both also have over 20 assists each on the season.

Wisconsin And The Points

Both teams have the star power to make this an interesting matchup. This one, though, is going to come down to who shoots it better. This is where I like Wisconsin. On the season, they are shooting 48.5% from the field and 41.6% from behind the arc. If they are able to shoot anywhere around that as well as slow the pace of play down a bit, I like their chances in that. Marquette also shoots pretty well from the field (45.6%) but their ability to make the three is much lower than that of Wisconsin (34.5% on the season). Watch out for Howard and the Hauser brothers, though. Marquette isn’t going to let this one go easily. Ultimately, I think it ends up being a pretty close game and so do the odds makers given how close the spread is on this one. Still, for my money, I will take the Wisconsin Badgers giving up a point.