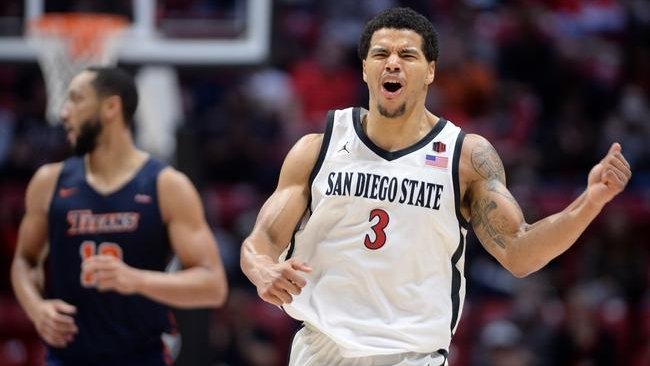 Last season, COVID wreaked major havoc on the college basketball season, with a number of games falling victim to postponement or cancellation, including a number of high-quality non-conference matchups.

As the end of 2021 approaches, the same scene is being repeated. As a result, a number of teams are currently on pause, including ranked teams UCLA, Ohio State, and Seton Hall. As a result, a couple of major matchups for this weekend are off.

Still, there is a lot of action worth watching and betting on over the next few days. Let’s take a look at what’s ahead.

This will be St. Bonaventure’s last chance to get a win against a major opponent, and it is at a neutral site as well. Jaren Holmes has played all 40 minutes in the last 3 games. With guard Kyle Lofton out they are really leaning on him.

The Hokies have one of the stingiest defenses in the nation. As a result, they can play with almost any program. They make their threes too, connecting on 39.3 percent of their outside attempts. But four early losses is disappointing, and they need this win as badly as St. Bonaventure does.

I was high on the Bonnies coming into the season. I thought, and still think, that all that continuity from last year is going to help them have a really strong season. The A-10 race is still ahead of them but I think they can get this game against the Hokies to build some momentum.

Both programs are comfortable playing at a slow pace but I think the Bonnies will be able to make some plays down the stretch to get the win. I will take the +2.5 but might also sprinkle a little something on the ML.

Richmond has fallen short in their other resume-building non-conference games, though losses against Maryland and Mississippi State were close. This is their last chance and their efficient offense should keep them in the game.

This is a tough spot for N.C. State. In their last game, they nearly took down Purdue before losing by 10 in overtime. Their whole season has essentially been winning and losing the games they were supposed to. The Wolfpack are solid but don’t really have that one trait they can lean on to turn a game.

No this is not turning into an A-10 betting advice column but I like the Spiders here. Point guard Jacob Gilyard has help this season, and with the ball in his hands a lot, Richmond should be able to stay on schedule offensively.

Neither team is going to run away from the other but look for a very experienced Richmond side to make a few key plays late to swing the game. I might even parlay St. Bonaventure and Richmond together.

Villanova had the worst game of the Jay Wright era against Baylor on Sunday. We were on Baylor to win with ease, but I definitely did not see that domination coming.

Still, there is a lot to like about Villanova overall and they match up well with Creighton. A bounce-back performance is to be expected as they get into Big East play.

The Blue Jays lost pretty much everyone from last year’s very successful team. Preseason expectations were low but they have played well, including an impressive win over BYU last weekend.

This Creighton team does not play as fast as past Creighton teams have, but the results have been good. Freshman guard Ryan Nembhard is underrated nationally.

The Wildcats are the ultimate “trust me” team right now. None of their losses are bad but only their OT loss to UCLA has shown us that this team might actually be pretty good.

Villanova is definitely not as bad as they looked against Baylor. And when it comes to experience, they have as much as anyone in the Big East. I think they are going to lean on that in this game against Creighton. Look for coach Jay Wright to get the most out of his players in this matchup.

The Bluejays have been much better than expected so we are getting good value by fading them in this spot, even though they are a home underdog.

Buckle up for this one. It might be the first team to 40 points wins.

The Gaels have put themselves out there more than usual so far this season. Wins over Utah State and Oregon are solid and their win over Notre Dame just got a bump after the Irish beat Kentucky.

St. Mary’s plays with one of the slowest tempos in the country. That serves them well because they don’t have great depth. But it also makes it hard to play catch up when they need to.

The Aztecs have a similar profile to the Gaels. They are playing their trademark stingy defense and like St. Mary’s, they don’t mind if the shot clock is buzzing when a shot goes up. Cal transfer Matt Bradley will be key to success, but they need more scoring others.

This total is very low with neither team expected to score even 60 points. In a game like that having some to points to play with is always a wise strategy. This game is at a neutral site too and underdogs generally get a little more backing from the crowd in spots like this. I look for Bradley to find a way to make his first big shots with SDSU.

It is fair to wonder a little about this Gonzaga team. They have two losses already and some thought they might run through the season undefeated again. Still, they are going to be favored in every game this season. That is no accident; the Bulldogs are loaded.

This matchup is going to be a tough one with the way that Texas Tech is committed on defense. Gonzaga has more than enough weapons to handle the Red Raiders though.

The Red Raiders got a nice profile win, beating Tennessee last week. Their schedule has been really light though, with a loss to Providence their only other notable game. They make things tough against opponents but if the Friars could score 72 against them, you have to think the Zags will be able to as well. That would not be ideal for Texas Tech.

This one is going to be a battle for pace as the Zags will try and speed up one of the best defensive teams in the country. This year Gonzaga is in the top 20 in defensive efficiency so they can make it difficult for opponents to score too.

Gonzaga is not going to blitz Texas Tech the way they do some opponents, but the Bulldogs should pick up a solid double-digit win.

If you like predictive metrics then you will be pleased to hear that Baylor has passed Gonzaga at the top of the KenPom rankings. The scary part is that they can be better, as most of their key players are still figuring out their roles. That is a scary thought.

Oregon has been one of the most disappointing teams in the country. Coach Dana Altman usually does a great job maximizing transfers but this season it has yet to come together.

Not only are the Ducks just 5-5, but they are 0-2 in Pac-12 play with losses to two non-contenders in Arizona State and Stanford. They are desperate for a momentum-changing game, but it is hard to see it here.

I still like the talent of this Oregon team to ultimately compete well in the Pac-12 this season. They have enough to make things uncomfortable for the Bears for a while, but it is hard to see them poking a hole in Baylor’s perfect record.

The Bears might be a little overvalued right now but their combination of offensive and defensive efficiency is hard to beat. Oregon would have to have a really hot shooting game, but there is nothing we have seen yet that indicates that they can hang with the Bears for a full 40 minutes.

It has been a miserable month for the Seattle Mariners, and things are unlikely to get any better tonight as they welcome AL Cy Young Award favorite Justin Verlander and the Houston Astros to T-Mobile Park. After just missing out on the MLB playoffs last season, the Mariners entered this season with hopes of finally END_OF_DOCUMENT_TOKEN_TO_BE_REPLACED