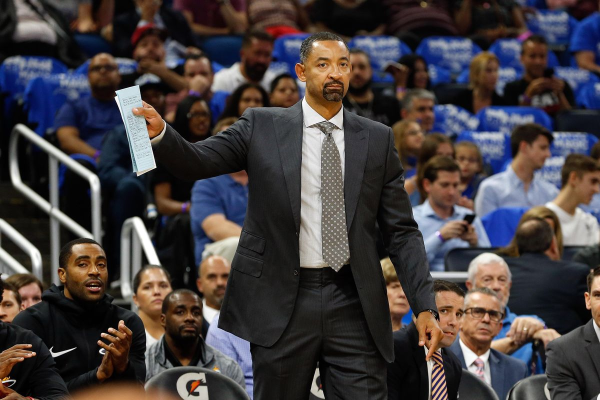 The NBA playoffs may be getting most of the attention in the basketball world these days, but this is actually one of the busiest times of the year in college basketball. Let’s take a look at some of the top stories from the past week.

A couple of weeks after John Beilein left to coach the Cleveland Cavaliers, Michigan is still looking for a new head coach. Providence coach Ed Cooley appeared to emerge as one of the top candidates, although he has since signed an extension to stay with the Friars. However, former Wolverine and Fab Five member Juwan Howard reportedly interviewed for the job on Tuesday. Howard has been an assistant with the Miami Heat since retiring in 2013. At the moment, it looks like it could be a two-horse race between Howard and current Michigan assistant Luke Yaklich, who’s likely to land a head coaching job somewhere in the not-too-distant future.

It’s only May, but the Iowa Hawkeyes may have just suffered their first loss of the 2019-20 season. Senior Jordan Bohannon, the school’s all-time leading three-point shooter, underwent hip surgery on Wednesday, putting his season at risk. Recovery from the surgery could be anywhere from five to nine months. If it takes closer to nine months for Bohannon to get back to full health, he could redshirt and delay his senior season. Bohannon, who averaged 11.6 points per game last season, has indicated he won’t play next season if he doesn’t feel 100%.

This is the time of year when players who have entered the draft but not hired an agent have to decide to stay in the draft or return to school. Over the past week, Grant Williams of Tennessee, Kenny Wooten of Oregon, Ignas Brazdeikis of Michigan, and Oshae Brissett of Syracuse have all pledged their commitment to going pro.

The Place to Be

Texas Tech is the new home for Virginia Tech grad transfer Chris Clarke. After being suspended this past season because of off-court issues, the 6-6 forward will spend his final year of eligibility with the Red Raiders, who are fresh off a trip to the Final Four. Clarke averaged 11.4 points for the Hokies as a sophomore and 8.2 points as a junior in addition to averaging over six rebounds per game in his career. He figures to team up with fellow grad transfer TJ Holyfield to lead a Texas Tech team that is losing five of their best players, including likely lottery pick Jarrett Culver.

Gain One, Lose One

One player Texas Tech won’t have next season is Khavon Moore, who announced this week that he’ll be transferring to Clemson. Lingering concerns about a broken leg Moore suffered in high school caused him to sit out almost the entire season. The 6-7 freshman forward will have to sit out next season but could potentially have four years of eligibility at Clemson if he’s granted a medical hardship waiver for last season.

One In, One Out

Tennessee also had a case of gaining a player while losing a player this past week. The Vols have added 7-0 center Uros Plavsic, a native of Serbia who graduated from high school in Chattanooga before redshirting at Arizona State this past season. He’s hoping to get a waiver to play next season. Meanwhile, former Tennessee forward Derrick Walker is heading to Nebraska. Walker, a 6-8 forward from Kansas City, played in 64 games for the Vols over the past two seasons but had limited minutes and little productivity. He’ll sit out next season and then have two years to play with the Cornhuskers.

One of the top transfers on the market has chosen UNLV. David Jenkins, a 6-2 guard who averaged nearly 20 points per game last season at South Dakota State, will follow coach TJ Otzelberger in his move to UNLV. He will have to sit out next season but then have two seasons of eligibility with the Runnin’ Rebels after picking them over offers from Oregon and Gonzaga.

Arkansas landed a big transfer this week, securing a commitment from former Cal center Connor Vanover. The 7-3 native of Little Rock will be transferring to his home state and is hoping to get a waiver that will allow him to play right away. If not, he’ll sit out the 2019-20 season before having three seasons of eligibility left. Vanover scored 7.5 points per game this past season at Cal while shooting 35% from the perimeter.