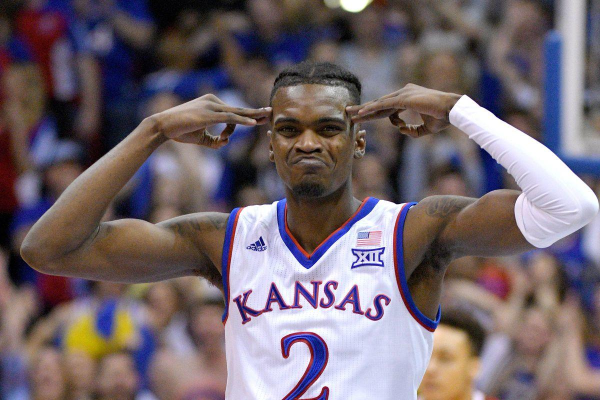 The Kansas Jayhawks began the season as the number one ranked team in the nation, but have since been passed by Duke. The Jayhawks began their season with a 92-87 victory over Michigan State, and Kansas has continued to win ever since. They come into this game with a 3-0 record, but this will be their toughest test since the Michigan State game. Marquette brings a 3-1 record into this game, with their lone loss coming to Indiana University. Kansas isan 8.5 point favorite over Marquette in this game.

The Kansas Jayhawks have a roster that is loaded with talent, and they should be one of the top scoring teams in the country this season. Coach Bill Self has an interesting roster that has a nice balance between steady veterans and up and coming freshman stars. The Jayhawks are averaging 88.3 points per game, but are giving up 77 points per game. Kansas will need to improve on the defensive end if they are going to make a second straight run to the Final Four.

Senior guard Lagerald Vick has been the top scorer for the Jayhawks so far this season, but he is not the most talented. Vick is averaging 22.3 points and five rebounds per game for the Jayhawks, and is now their leader on the floor. Freshman Quentin Grimes has pitched in with 12.3 points per game this season and is shooting better than 50 percent on three-point attempts. The outside shooting of the Jayhawks opens up the paint for Udoka Azubuike to do his work. Azubuike is averaging 19 points and 7.3 rebounds per game this season. Kansas will be a nightmare for the Golden Eagles to defend in this game.

The Marquette Golden Eagles have looked impressive in their three victories this season, but those wins came against much weaker opponents. Marquette was blown out by Indiana in their only loss of the season, and will need to play much better to keep up with Kansas. The Golden Eagles are averaging just 76.5 points per game this season, and have won games with their defense this season. Marquette is a relatively young team, but they are led by a superstar junior in Markus Howard.

Howard leads the team with 20 points and 5.5 assists per game so far this season and has also grabbed 5.8 rebounds per game. The diminutive junior will need to have a big game against Kansas if they are going to pull off the upset, but Howard will likely be guarded by much bigger defenders. Junior Sam Houser is having the best year of his career in support of Howard and will be a key part of this game. Houser is averaging 15.5 points and 6.5 rebounds per game for the Golden Eagles this season.

The Marquette Golden Eagles should be one of the top teams in the Big East this season, but taking on Kansas this early in this season is a tall task. The Golden Eagles got embarrassed by the other power-five school that they have played this season, and their lack of depth will cost them in this game. Kansas looks like one of the only challengers to Duke this season, and they can score on anyone. Look for the Jayhawks to run away from Marquette in the second half and cruise to a victory. Bet the Kansas Jayhawks -8.5 over Marquette in this game.

After the Novak (or Novax?) Djokovic visa saga dominated pre-tournament headlines, we can finally look forward to some on-court headlines as the Australian Open gets underway. Djokovic news has taken the focus off of the tournament, which is certainly understandable. After all, the fate of the world number one and top seed would significantly impact END_OF_DOCUMENT_TOKEN_TO_BE_REPLACED